The best summer plans are ones you don’t have to plan for. You can just show up. There’s always room. You don’t have to buy a ticket. If you have kids, you can usually bring them along, so no sitter $$$. Depending on the location, you can even bring the dog.

We’re talking about the amazing slate of free summer music and movies we’re lavished with annually in Minneapolis and St. Paul. Seriously, you can go out every night all summer long, usually to more than one event. Keep blankets, lawn chairs, mosquito repellent and sunscreen in the car for those sudden impulses.

St. Paul’s Music in the Parks outdoor concert series is already under way, but you can catch the South High Community Band tonight at Como Dockside, and the Capri Big Band there next Tuesday, and Nikki & The RueMates on June 1, for starters. Here’s that calendar; you can copy events to yours.

Most St. Paul concerts are at Como Dockside, but the city also hosts three free series elsewhere. “Music in Mears” (12 concerts) kicks off its 13th year on June 9 with Alex Rossi and Dusty Heart. FMI (click SCHEDULE at the top). New this year, “Rhythm in Rice” (11 concerts) brings global sounds from local bands to Rice Park starting June 10. Its goal: to unite the multicultural communities of the Twin Cities through music. Check the Facebook page for updates. “Groovin’ in the Garden” (eight concerts) returns June 15 to the Visitor Center lawn at Como Park Zoo and Conservatory with music by Crankshaft & The Gear Grinders and lots of things for the kids to do. FMI. St. Paul’s free music continues into October.

Minneapolis’ Music in the Parks has scheduled nearly 200 live concerts at six parks throughout the city, starting May 30 at Lake Harriet with All the Islands, ending Sept. 5 at Lake Harriet with Free Fallin’, a Tom Petty tribute. Follow the music – all kinds – from Harriet to Nicollet Island, Father Hennepin Bluff, Minnehaha Park, Bryant Square and Theodore Wirth. The complete schedule is here. Just bookmark it. You can also view and download the schedules for all six locations. 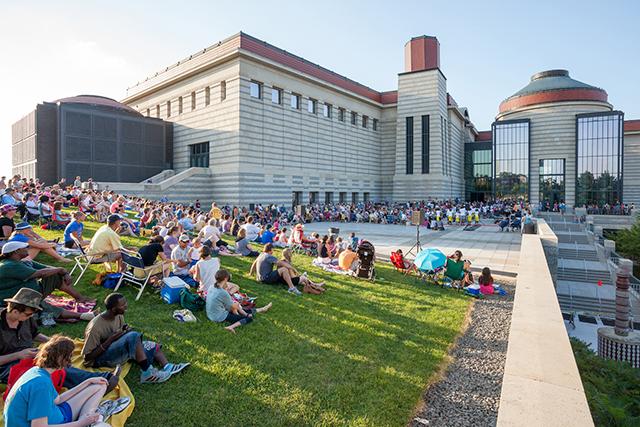 Photo by Brady Willette, courtesy of the Minnesota Historical Society
“9 Nights of Music” at the History Center

Now in its 19th year, the History Center’s popular “9 Nights of Music” starts Tuesday, June 26, with the Chords Karma Band (hip hop with classic Indian and folk, because the History Center’s “Beyond Bollywood” exhibit) and continues every Tuesday in July and August. This year includes a “bonus night,” so it’s really 10 nights of free outdoor performances. This is always a good lineup and this year is no exception; Bruce Henry will perform in a concert that celebrates the Rondo neighborhood, and Dan Chouinard and Prudence Johnson, and Tim Patrick, and a Hmong band called Itchy Fingers, and more. FMI.

For more than 40 years, the Minnesota Orchestra has spent a week each summer performing live outdoor concerts for the community. This year’s “Symphony for the Cities” series begins June 27 at the Lakefront Park Bandshell in Hudson, Wisconsin, comes to Lake Harriet June 28, travels to Plymouth June 29 and Winona June 30, then returns for the big one: July 4 at Boom Island. Assistant Conductor Roderick Cox leads all five concerts.

Minneapolis’ Movies in the Park includes 71 films, all starting 15 minutes after sunset, screening at many parks around the cities. Download the schedule, then go see old favorites, classics you somehow missed and films you meant to see but never got around to, and now you can see them for free. First up: “Spectre” on June 6 in Peavey Park. “Casablanca” screens at Father Hennepin Bluff on June 14. “The Martian” at Lynnhurst Park on June 18, Fairview Park on June 30 and other locations after that date.

St. Paul’s Movies in the Parks lineup is sparser but includes some good ones: “Minions” at Mattocks Park on June 28, the never-gets-old “Jurassic Park” at Highland Fest on July 15, the marvelous “Inside Out” at Groveland Rec Center on Aug. 10 and Langford Rec Center on Aug. 12. FMI and schedule.

We’re usually spilling the details of the Walker’s Summer Music & Movies series by now, but all we know about is one single, solitary event: the Aug. 1 combo of Hüsker Dü’s Grant Hart with a screening of the Beatles’ “A Hard Day’s Night,” at Loring Park. That’s impressive so we’ll stop complaining, plus we’ve just been told that we’ll have the deets on the other dates (Aug. 8, 15 and 22) next Tuesday.

Also at the Walker, not outdoors, but free and fun (and good for those hot and muggy summer days): the Free First Saturday Summer Series: Stage & Screen, pairing local bands with family movies. Bands play at 11 a.m., movies show at 1 p.m., with art-making, gallery tours and activities in between. That series launches Saturday, June 4 with Lulu’s Playground and the film “Ernest & Celestine.” Other dates: July 2, Aug. 6, Sept. 3.

BTW none of this happens on its own, or without considerable financial and programming support from a lot of people. Todd Walker recently wrote a piece for the PiPress about Brian Horst, the man behind Music in Mears and the new Rhythm in Rice. Funding comes from city and Park Board coffers, from grants, from Xcel Energy, from the Legacy Fund and private donations. If you voted for the Legacy Amendment, we thank you, and not for the first or the last time.

And now for something that’s not free but is so quintessentially summer, or at least was, once upon a time: drive-in movies. There aren’t many drive-in theaters left, hardly any, in fact, and if you live in the cities you’ll have to travel a bit to find them, but there’s something about sitting in a car at night, eating popcorn and watching movies, listening to the sound coming out of your car radio, hearing car doors open and close as people go to and from the concessions, and the sounds of all those engines starting up and heading into the night when the screen goes dark and it’s over.

We found two: the ValiHi Drive-In in Lake Elmo (triple features! Cash only! Hot dogs every night for a buck!). And the ELKO! Drive-In Theater in Elko New Market (which opens for the season on June 3 with “Captain America: Civil War”). Outstate, there’s the Verne in Luverne, the Sky-Vu in Warren, the Long in Long Prairie and the Starlite in Litchfield. Years ago, there was a drive-in at 78th and France that held 1,700 cars. Hard to believe.