The McKnight Theater Artist fellowships recognize Minnesota theater artists other than playwrights whose work demonstrates exceptional artistic merit. Each fellow receives a $25,000 award and $7,000 in development funds for a new theatrical work.

Ashwini Ramaswamy dances the night away

Ashwini Ramaswamy credits her grandfather with inspiring her first evening-length dance work as a choreographer. “He was telling my little nephews about some nighttime insect that only did a certain thing and nobody knew its importance. I was fascinated by the idea that there’s a whole world out there we kind of ignore. It’s so mysterious, but it’s half the day.”

From that chance event two years ago came “Nocturne,” a new work in three parts, each exploring a different facet of the night: “Luna/Chandra,” the natural world of flora and fauna (fireflies, tigers, nocturnal flowers blooming), “Rapture/Pramodya,” the emotional world of human love (anticipating the lover, mourning his departure), and “Invocation/Yaman,” the spiritual world of a predawn time called Brahma Muhurtha, when distractions are few and the soul can more easily communicate with the divine.

Ashwini is a soloist with Ragamala Dance Company, the Minneapolis-based, internationally acclaimed practitioners of Bharatanatyam, a demanding and intricate South Indian dance form that dates back thousands of years. Ragamala was founded by Ashwini’s mother and sister, Ranee Ramaswamy and Aparna Ramaswamy, who serve as co-artistic directors and so far have gotten most of the press and attention. Tamara Nadel and Jessica Fiala round out the company, and all five women are distractingly beautiful in their traditional makeup, colorful silks, and hennaed feet and fingertips.

We saw a full run-through rehearsal in May, and it was enchanting. Long stretches and reaches, held poses humming with an inner current, breathtaking tableaus and the elaborate micromovements of the form – fingers slowly opening into flowers, eyebrows lifting, emotions flickering across the face and through the body – came together in a work that seems uniquely Ashwini.

“I love the idea of this other world, this other realm that happens when everyone is asleep,” Ashwini said after the rehearsal. “In Bharatanatyam, it’s always dawn or daytime, and things blooming. But that can happen at night.”

Ashwini blooms this weekend at the Red Eye Theater, where she’ll dance “Nocturne” with Ranee, Tamara and Jessica. Performances are at 8 p.m. Thursday, Friday and Saturday. FMI and tickets (pay-as-able Thursday night, $15/$8 Friday and Saturday).The Red Eye is a small, intimate place, perfect for catching the minute details and subtleties of Bharatanatyam. Fun to know going in: The closing moments of “Nocturne” are based in part on a poem by Jorge Louis Borges, “Young Night,” and a line Borges borrowed from Goethe: “Everything near becomes far.” According to Ashwini, “That’s what’s happening at the end.”

Community, nature and social justice are the themes of the sixth iteration of “Made Here,” presented by Hennepin Theatre Trust and sponsored by Andersen Windows. For spring into summer, “Represent: Made Here” will fill otherwise empty storefront windows in Minneapolis with photographs, paintings, graphic art, textiles, drawings and multimedia installations by more than 60 Minnesota artists and students. 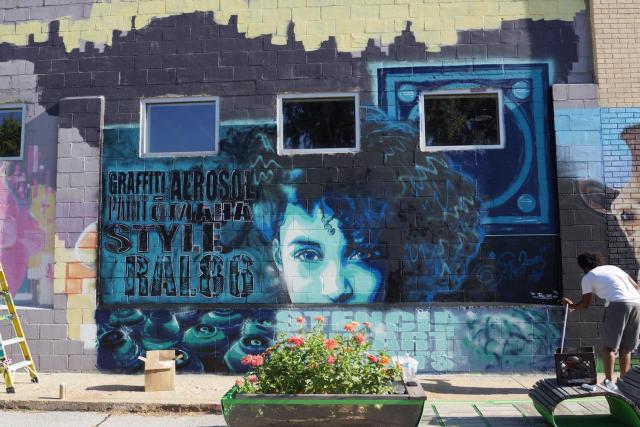 Courtesy of Made Here
Art by Reggie La Flore, part of “Made Here”

What’s now the largest initiative of its kind in the U.S. began as a pilot project in 2013, curated by Joan Vorderbruggen, a former nurse whose 2012 “Artists in Storefronts” project in her own Whittier neighborhood drew attention and did what art tends to do: change things for the better. Today Vorderbruggen is the Trust’s director of public art and placemaking and a force for public art downtown.

“Represent: Made Here” kicks off with a public celebration Thursday at Marin Restaurant and Bar that includes interactive performances, live music and walking tours led by Vorderbruggen, who knows this sprawling exhibit better than anyone and loves to talk about it. 5 – 8 p.m. Free.

That bees are in trouble – and so are we, if they disappear entirely – isn’t new news. But it sounds new, more personal and perhaps more urgent when told in the language of poetry. James Lenfestey, a poet, memoirist, and former editorial writer for the Star Tribune, once kept bees and has collected poems about bees for a decade, like pollen clinging to his legs.

Just out from the University of Minnesota Press, Lenfestey’s latest, an anthology titled “If Bees Are Few: A Hive of Bee Poems” spans 2,500 years of poems about bees, in alphabetical order by author, from Sherman Alexie to Timothy Young. As a bonus, we get Lenfestey’s luscious take on why Yeats’ line about the bee-loud glade may be “the sweet taste of poem-music in the English language.”

Not all of the poems are about bees today and their struggle to survive. Most have to do with their lives, industry, mystery and beauty, their habits and appearance and sometimes their sting. “Here are my bees,” writes Carol Ann Duffy, “brazen, blurs on paper, besotted: buzzwords, dancing their flawless, airy maps.”

The official launch for “If Bees Are Few” happens tomorrow (Thursday, June 2) at the Cargill Building Auditorium and Seminar Room on the University of Minnesota’s St. Paul campus (1500 Gortner Ave., St. Paul). A dozen poets are expected. Doors and honey tasting at 6:30 p.m., program at 7, signing and reception at 8. Free. Sales of the book benefit the Bee Lab at the U of M. If you can’t make tomorrow’s event, Lenfestey will be at SubText Books next Thursday, June 9, at 7 p.m.