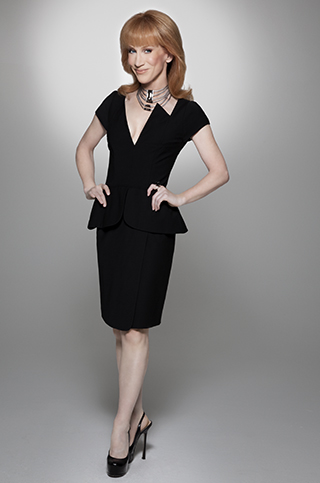 Courtesy of the artist
Kathy Griffin

Kathy Griffin is hilarious. Even when she’s serious. After learning that the two-time Emmy and Grammy-winning comedian will be in Minneapolis for the Twin Cities Pride festival, we thought – let’s talk to her! That’ll be a million laughs!

Griffin is midway through her massive “Like a Boss” tour, a two-year series of mostly improvised shows riffing on the latest news in pop culture. Thursday’s performance at Orchestra Hall will be her first since the horrific shootings at the Pulse nightclub. At a time when our LGBT community could use a good laugh, there’s no one better to bring it than their longtime advocate and friend.

We spoke with Griffin just two days after Orlando. Any thoughts that she might not want to talk about that went poof in our first few seconds on the phone. She’s a total pro, and of course she is, given the life she has chosen and earned. Griffin is a celeb who hangs out with Anderson Cooper and drives a Maserati, but at the end of the day – many days – she’s on stage alone, a raucous, outrageous, big-mouthed woman in what’s still mostly a man’s world.

MinnPost: How will the recent events in Orlando shape your performance here?

Kathy Griffin: I’ve been touring for so long, and I’m very clear about what my lane is. My lane is, as a comic, to push the envelope and get in trouble. But my real job is real simple. My job is to make people laugh. That’s it. Regardless of the situation.

I had a show the night of the George Zimmerman/Trayvon Martin verdict. I’ve had shows where someone who was prominent in my act passed away two hours prior to the show. So I have a lot of experience with this, and my feeling is very strong. Yes, I’m there to participate in Pride, which I’ve done in many cities, but I know this is a time and an audience where you have got to run head-on into these situations. The LGBT community has always been very good about dealing with a topic head-on, and we lay everything on the table because this is an oppressed group and the struggle continues, and yet when it’s time to laugh I go, “OK, that’s my job; that’s where I come in.”

So I will probably address the situation at the beginning, and then we’re going to get on with the vulgar, inappropriate horror show that is my hilarious comedy act. A big part of the message is Pulse is going to reopen and it’s not like LGBT folks are going to stop dancing or stop having fun or stop laughing. And I think that is a crucial thing. I’ve done standup in an AIDS hospice, I’ve done standup in war zones in Iraq and Afghanistan. I very much take pride in going to these areas or venues, whether it’s a Pride fest or a war zone. I very much look forward to going and making these folks laugh, and giving them a break.

I’ve also found that if I try not to do my job, if I get nervous that I’m making light of a situation, people don’t like that. So no matter what you’re going through, anybody who buys a ticket to my show is clearly saying, “I need to take a couple hours now and laugh and blow off some steam.”

I am not going to hold back in light of any tragedy. It just fuels my fire and makes me want to be more inappropriate, so that’s what I’ll be doing. I’ll be dropping the belly laughs and not worrying about being appropriate or in any way proper. I’m going to take off my usual proper hat of comedy, which I’ve never worn, and just let it fly.

MP: When did you become an LGBT ally and advocate?

KG: It’s so cliché, you’re going to laugh. In my day we had a label for ladies like me. And it was “hag,” and there was another word before it that rhymed with “hag,” but now I can’t have any fun and say that phrase anymore.

In all my years of high school, I never once was asked to the prom or homecoming. But when it came time for the Sadie Hawkins dance I asked my boyfriend, Tom Murphy, who is now married to his lover, David, and I officiated at their wedding. I believe I turned him gay. I believe that it is not genetic; it is environmental, and apparently if you go out on just one date with me, you turn gay. I’m, like, the opposite of Jesus camp. And you know what? So be it. Love is love, dammit.

MP: You’ve said that you enjoy coming to Minneapolis.

KG: I love it because it’s such a smart city. It’s a great comedy city. I’m a Chicagoan, so the sensibilities are kind of similar. It’s a tough town. You’ve got the most [messed-up] weather ever. The first time I brought a friend of mine from California, he was like, “What are all these tunnels?” I’m like, “That’s how people in Minneapolis walk from building to building when it’s negative 17 with a wind chill of negative 50.”

MP: How long will you be here?

KG: I think I’m just there for that day, but I never know. I’ll talk to my gay assistant, who decides all my travel plans and then acts like I have any say in the decision-making in this house. My gay assistant and my 96-year-old alcoholic mother basically run my life.

MP: Will you walk by First Avenue?

I want Marcus [Bachmann] to come to my show in a plastic moustache and goofy glasses, in disguise. I’m just saying I think he would like my show. That’s all I’m saying. I’m not implying anything. How dare you?

KG: I actually met him and he brought me up on stage in one of those secret shows that people talk about. It was really interesting when he passed away. Everybody was talking about those legendary secret shows, and I’m sitting at home, like, “Yeah, that [stuff] is real.” It was me one time. It was really cool.

It was one of the years I was nominated for one of my two Emmys that I won. I went to a post-Emmy party held by People magazine and we partied. He brought me up on stage to dance. I’m watching Kardashian, but I’m like, “Kim, I did not shy away from the dance; I embraced it.” I did my horrible old white lady dancing, but it was a moment for sure. And nobody was tacky enough to pull out a cellphone, but now of course I wish I had.

In other words, I dated him. I think he was going to propose, but he just got shy at the last minute. I basically dated Prince, is what I’m saying now.

MP: Do you have a claim on his estate?

KG: Yes. I’m going to be filing that right away, and I’m only going to go for 60 percent of it because I was like a girlfriend of his, but I never technically married him, although I could be Mrs. Prince in my mind very quickly and very easily.

KG: There are so many things about this that are good to make fun of, because it’s so ridiculous that anyone would spend a moment worrying about it. How many places have we all been where it’s a small business and they just have a bathroom? I don’t know why people are freaking out.

I have to say, and I hope this comes across in print the way I intend it, but it is comical to me that anybody – and I’m going to go ahead and say “religious far right,” sorry, but it’s true – anybody thinks that if their 6-year-old girl goes into a bathroom that Caitlyn Jenner or Kate Bornstein or Jenny Boylan is going to go in there and molest them. Caitlyn Jenner wants to go into the bathroom and do her lipstick. That’s it. Everybody’s safe.

It’s a level of ignorance that is comical, but also it is changing. So I’m feeling more hopeful about that. There are a lot of things I’m not really so hopeful about, but I think the transgender bathroom thing is going to work itself out.