There’s a long list of reasons the annual all-night Northern Spark art festival is such a must-do, starting with these: You get to be a grown-up in the city, having new experiences, learning new things and hanging out with your friends. And you get to be a child, running around, playing and staying up way past your bedtime.

In previous years (this is the sixth), Northern Spark was basically a dusk-to-dawn arts party. That changed after 2014, when the festival, much of it outdoors, was hit by a storm of biblical proportions: 2.5 billion gallons of rain in 476 minutes.

Artistic director Steve Dietz and the other organizers took it to heart. Extreme weather events and their growing frequency are side effects of a warming planet. This year and next, Northern Spark will focus on climate change. Its theme, “Climate Chaos | Climate Rising” summarizes the festival’s planned trajectory over the next two years: “moving from a chaotic overload of information and issues to an uprising of action and activities.”

Art by itself won’t change the world, but it can educate, engage, tap into the emotions and get people on board. After Northern Spark 2016 ends at dawn on Sunday, programming will continue throughout the year, and Northern Spark 2017 will span the Green Line from St. Paul’s Lowertown to downtown Minneapolis. It’s still an arts party, but one with serious intent.

This year’s festival takes place in Minneapolis in two locations: the Convention Center and the riverfront in and around Mill Ruins Park. It’s more concentrated than in previous years and easier to grasp and navigate. The website (there’s no app this year) is mobile-friendly and includes a handy “My Night” feature that lets you create and share a list of things you’d like to see and do. You’ll probably be on your smartphone a lot, so give it a charge before you go.

At the moment, these are our eight favorite events and destinations out of more than 50 to choose from, but we’re prone to following shiny things.

The Opening Ceremony at the Convention Center. A welcome from Mayor Betsy Hodges, the unveiling of this year’s Creative City Challenge winner, “Wolf and Moose,” on the Convention Center plaza, and a live concert by multifaceted creator Helado Negro (whose Liquid Music performance last year at the Ordway Concert Hall was joyous and amazing), with the Minneapolis Music Company and dancers Alberta Mirais and Erin Smith. Timed: 8:30-10 p.m.

Mill City Museum. Performances, exhibits and live programming in the gallery from 9-midnight, artist projects all night throughout the building, in the Ruin Courtyard and the train shed. In the Office (adjacent to the Ruin Courtyard), watch films on climate change by artists from six continents.

Emily Johnson/Catalyst with Maggie Thompson, “Then a Cunning Voice and a Night We Spend Gazing at Stars.” This is part of a multiyear project that will lead to many quilts being laid together in a 4,000-square-foot area for all-night stargazing, performances, stories and songs. The Northern Spark chapter will be an all-night community quilting bee. In Mill Ruins Park; enter at W. River Parkway and Portland Ave. S.

Joshua McGarvey and Heckadecimal, “Ice Fall – Feel the Change.” Here’s the short description: “Come feel 200,000 tons of ice falling 120 feet in a sensory experience being projected onto the Gold Medal Silos.” We’re not sure how this will work, but it’s the sort of thing Northern Spark was born to do. In Mill Ruins Park; enter at W. River Parkway and Portland Ave. S.

Geoffrey Warner, Alchemy Architects, and U of MN Design Students, “lightHouse.” A fully functioning one-room mobile hotel made from a salvaged 8’ x 20′ shipping container. It’s about conservation, sustainability – and the whole Tiny House thing, which some of us are obsessed with. In Mill Ruins Park, under the Stone Arch Bridge.

Minnesota Sacred Harp Singers, “Azure Sky and Beauteous Earth: Hymns from the Sacred Harp.” Especially if you have never heard sacred harp singing, a.k.a. shape-note singing, don’t miss this. Originating in early America, it’s powerful, exuberant, and haunting, and also kind of loud. A wall of sound that predates Phil Spector. In the lobby of the Guthrie Theater.

Keri Pickett, Jason Takahashi, and Charlie Thayer, “Against the Grain.” Trains in Minnesota once symbolized exploration, migration, recreation and transportation of energy and food. Today they’re more likely to carry highly explosive fracked oil. Projected moving images combine with locally created street art in a statement about extreme energy extraction and the love of water. On the Chicago Mall at Chicago Ave. and S. Second St.

Myra K. Rucker, “Sunrise Yoga: Dem Bones/Being the Butterfly.” If you make it all the way to dawn, end the night with some yoga on W. River Parkway near the Guthrie. No prior experience needed. For all ages and fitness levels. Timed: 4:40-5:26 a.m. In years past, or maybe just one year, Northern Spark wrapped things up with a big pancake breakfast. This is better for you.

It’s supposed to be hot as heck on Friday and Saturday – in the 90s. But not at night. And there’s no rain in the forecast. Wear comfortable shoes, bike or bus if you can, dress in layers, bring a water bottle and snacks.

Starts today (Friday, June 10) at the Lagoon: “Presenting Princess Shaw.” If you missed it during MSPIFF, here’s another chance to see this inspiring, crowd-pleasing documentary on the big screen. Princess Shaw (Samantha Montgomery) is a struggling singer-songwriter in New Orleans with a YouTube channel; musical prodigy Kutiman (Ophir Kutiel) is a world-renowned composer, musician and video artist from Tel Aviv who discovers her and changes her life. FMI including showtimes. 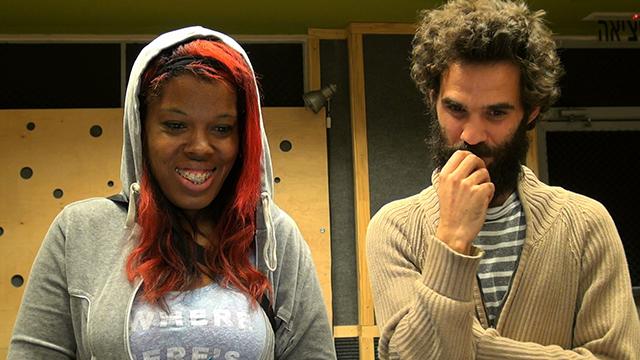 Tonight and Saturday at Intermedia Arts: “Rooted: Hip-Hop Choreographers’ Evening.” A celebration of the foundations of hip-hop, this annual event sold out every show in its first four years and won the 2014 Sage Award for Outstanding Dance Performance. Created and curated by Maia Maiden, it’s back with a full roster of artists including B Boy J-Sun, Brandi Phillips, Deadpool and Kenna Cottman (who curated the Walker’s Choreographers’ Evening in 2014). 7:30 p.m. FMI and tickets ($16).

Saturday and Sunday in downtown Excelsior: Excelsior Art on the Lake. Now in its 36th year, this very pleasant stroll-and-shop on the shores of Lake Minnetonka features more than 140 artists. 10 a.m. – 6 p.m. Saturday, 10 a.m. – 4 p.m. Sunday.

Sunday at Caponi Art Park in Eagan: Concert in honor of Tony Caponi. The park celebrates its founder – artist, writer, civic leader, environmentalist, professor and former head of Macalester’s art department – with a concert by the Minnesota Sinfonia and a few words from family and friends. Caponi died last October at age 94. 6:30 p.m. Free.

Monday at the Guthrie: Music in the Making: Steven Mackey with Jason Treuting and Mark DeChiazza. Ahead of performing the world premiere of “Steven Mackey’s Orpheus Unsung” in the Dowling, the final event in Liquid Music’s 2015-16 season, composer Mackey, Treuting of Sö Percussion, and director, filmmaker, designer and choreographer DeChiazza have a chat. 7 p.m. Free, but you’ll need a ticket. Next Thursday’s concert is sold out, but tickets are still available (as of this minute) to Friday and Saturday. 7:30 at the Dowling.

Monday at SubText Books: SubText Book Club discusses Sinclair Lewis’ “It Can’t Happen Here.” Written during the Great Depression, Lewis’ tale of a president who becomes a dictator was called “a message to thinking Americans” when it was first published in 1935. More recently, Salon dubbed it “the novel that foreshadowed Donald Trump’s authoritarian appeal.” Even if you can’t read it between now and then, it should be interesting to hear people talk about it. 7 p.m. Free.