For the first time in the 22-year history of the Stone Arch Bridge Festival, there will be fireworks. General Mills will mark its 150th year anniversary with a large fireworks display over the Mississippi on Friday (that’s tonight) starting around 9:30 p.m. Come to a free concert on Water Power Park anytime after 5 and stay for the oohs and aahs.

Adding Friday to its schedule allows Stone Arch to expand its popular Beer Sampler to two days. Some 10-15 breweries from Minnesota, Wisconsin and other locations will show off their wares from 4 to 7 p.m. on both Friday and Saturday nights. Advance ticket sales have ended; on-site tickets (if any are left) are $20. 21+.

This year’s festival features 250 artists, live music on four stages, family art activities, an “Art of the Car” show, a motorcycle gallery and dozens of food vendors. There’s a decent amount of parking nearby, but all bets are off for Saturday, when Rock the Garden happens at nearby Boom Island. FMI including artists, schedule, map and more. The festival starts at noon Friday, 11 a.m. Saturday and Sunday.

A good year for Northern Spark

If you wove through the crowds, stood in the lines and dodged the bicycles at this year’s Northern Spark, you won’t be surprised to learn that more than 34,000 people attended the all-night arts festival that opened at the Convention Center and settled into the Mill City Museum, the Guthrie and the Stone Arch Bridge area for the rest of the night.

Take 34,000 people and divide that by 43 – the number of art projects – and you’ll know why it seemed to take forever to get your lighted jellyfish and join the eerie yet beautiful parade at “The Illuminated Reef,” peek into the bathroom of the “lightHouse” (a tiny, movable hotel room!) or find a place to sit and eat your hot dog. We never made it to the “Night Library.” Enough people did to rack up 36,000 minutes there. 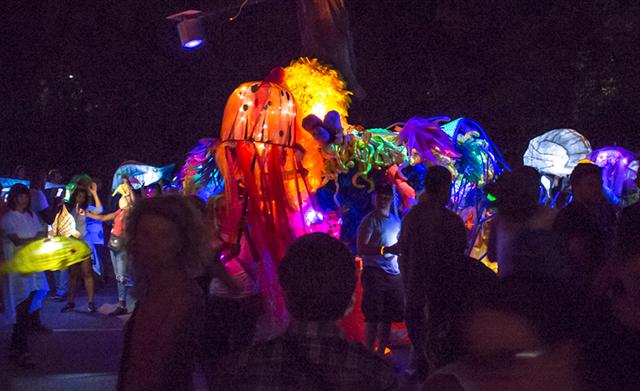 It was magical to see so many people out at night, the lines crossing the Stone Arch and climbing up the steep hill from the riverfront to the museum, the walkers and watchers and doers. And you could sneak away for a few moments of relative quiet, following the dark path on the other side of the Reef along the river’s edge to the gate before the lock.

A thunderstorm waited until 2:26 a.m. to start and ended at 2:53. We’re already looking forward to next year, when the Spark will take us all along the Green Line.

Tonight (Friday, June 17) at the MMAA Project Space: “The Art of Beer Labels.” A good start to the weekend. Beer expert Doug Hoverson, author of “Land of Amber Waters: The History of Brewing in Minnesota,” will walk you through the art of beer labels through the 20th century, and local breweries Tin Whiskers and Bad Weather will provide free tastings. 6-8 p.m. FMI and tickets ($6 online or at the door; members free).

Tonight at Walker West: David Binney Quartet. Binney’s first-ever Twin Cities date with his quartet is a solid end to Walker West’s debut “8 O’Clock Jump” season. An adventurous player and original thinker, the New York-based alto saxophonist and composer will perform with Jacob Sacks on keys, Eivind Opsvik on bass and Dan Weiss on drums (some of us saw Weiss in February at the Walker with Rez Abbasi in a jaw-dropping evening). Doors at 7:30 p.m., show at 8 in Walker West’s intimate performance hall. FMI and tickets ($15). 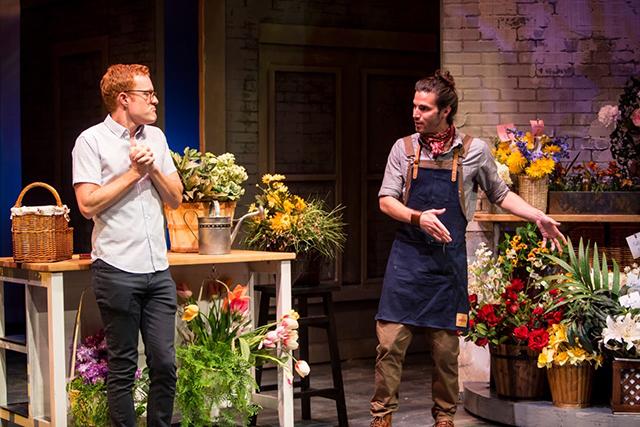 Opens tonight at the Jungle: “Le Switch.” After Minnesota legalized gay marriage in 2013, we dumbly thought all the gay couples we know would immediately tie the knot. It took us a minute to realize they didn’t appreciate the pressure and we should mind our own beeswax. Philip Dawkins’ witty comedy looks at gay marriage through the eyes of a 30-something named David, who’s old enough to remember when gays couldn’t marry and also commitment-shy. Then he goes to Montreal for his best friend’s bachelor party and meets a charming young florist. Chicago writer Dawkins is known for his plays about gay life, including “The Homosexuals” and “Charm,” seen at Mixed Blood this spring. With Kasey Mahaffy (TV’s “Modern Family”), Michael Hanna, Patrick Bailey, Emily Gunyou Halaas and Michael Weiser. Jeremy Cohen, artistic director at the Playwrights’ Center, makes his Jungle directorial debut 8 p.m. FMI and tickets ($35-$48). Ends July 31. 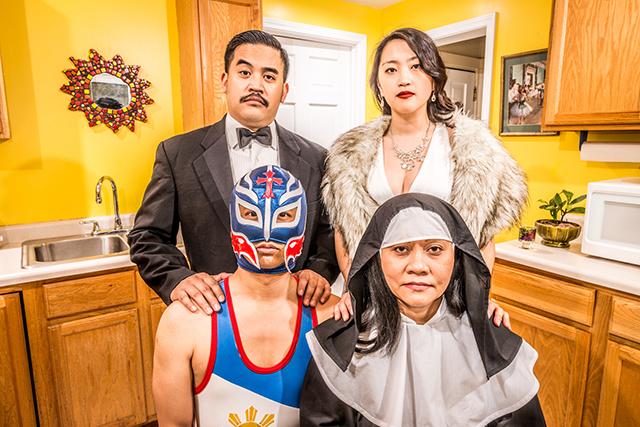 Photo by Rich Ryan
“tot: The Untold, Yet Spectacular Story of (a Filipino) Hulk Hogan.”

Saturday at the American Swedish Institute: Midsommar Celebration. You’d think everyone at ASI would be exhausted after the brouhaha surrounding Swedish chef Magnus Nilsson’s visit, and maybe take some time off. But noooo. They’re right back at it with a full day of singing, fiddling, dancing, pole-raising, flower-head-wreath-making, face-painting, storytelling, outdoor games and more family-friendly things to see, hear and do in traditional Swedish Midsommar style. 10 a.m. – 5 p.m. Day-of tickets $10 adults, $5 ages 6-18, free to members and kids 5 and under. FMI and schedule.

Saturday at Franconia Sculpture Park: “Conversations with Creators on the Prairie.” Meet, greet and learn from six Minnesota sculptors with work currently on display at the park: Pete Driessen, Asako Nakauchi, Peyton, Emily Stover, Amy Toscani and Asia Ward. They’ll lead walking tours of the exhibition and talk about their own work, past and present. Artist conversations at 1 and 3 p.m., live music by Duluth’s Mary Bue & the Holy Bones at 2 and 4. There’s road construction all over, but Franconia is completely accessible from the west and south on Hwys 8 and 95. Coming from Wisconsin? Follow the detours through Osceola or Taylors Falls. 1-5 p.m. FMI. Free and open to the public.

Monday-Wednesday in the Dunsmore Room at Crooners: Three Nights with David Hazeltine and friends. Think of it as an Artists’ Quarter reunion, but in Fridley, above ground, with big windows overlooking a lake. And as a kick-off to the Twin Cities Jazz Festival, which starts Thursday. New York-based pianist Hazeltine was a popular guest artist at the AQ, and in this three-night residency at the Dunsmore he’ll perform with some of his (and our) favorite people. Monday, it’s Hazeltine and the splendid tenor saxophonist Eric Alexander. Tuesday: Hazeltine, Alexander, bassist Billy Peterson and drummer (and former AQ proprietor) Kenny Horst. Wednesday: a Hazeltine and Peterson CD release party. Two shows, 7 and 9 p.m., all three nights. Dinner show and concert pricing; click the calendar FMI.