This weekend marks the first anniversary of the Supreme Court’s historic ruling on same-sex marriage, which makes it a perfect time for Twin Cities Pride, the annual gathering of the GLBT community, family and friends and one of the nation’s largest Pride celebrations. This weekend also marks two weeks since the mass killing at Pulse, a gay nightclub in Orlando.

The party will be tinged with sadness and grief, with tributes during the parade and at the festival in Loring Park, but it will still be a party. Extra security will be in place, including visibly more uniformed police, but it will still be a party. In the words of Pride’s executive director, Dot Belstler, “We must not let fear keep us from dancing.”

Dozens of events are planned for the weekend. Here’s a selection.

Friday at CHS Field: Pride Night at the Saints. In the first-ever Pride Fest sports partnership, the Saints will play the Winnipeg Goldeyes wearing rainbow uniforms. Plus fireworks after, with songs by Queen. 7-10 p.m. FMI and tickets ($16-$18). Note: The Twin Cities Jazz Festival will be going on at the same time in the same neighborhood. Get your free Metro Transit pass here (scroll down).

Saturday and Sunday in Loring Park: Pride Festival. Hundreds of exhibitors, dozens of foods and beverage trucks and booths, and big crowds. 10 a.m. to 6 p.m. both days. Here’s a detailed map [PDF]. Catch a Pride Art Show at Third Bird on Harmon Place. In the park’s Community Arts Center, visit the GLBT History Pavilion and peruse items from the Jean-Nickolaus Tretter Collection in Gay, Lesbian, Bisexual and Transgender Studies.

Friday in Loring Park: Beer Dabbler. This year’s theme is “Icons.” 50 Minnesota breweries will each offer a special beer created in honor of an icon and advocate of the GLBT community. (We’re imagining a Kathy Griffin beer. Spicy? Tangy? Blue?) Unlimited samples, plus live music and food trucks. FMI and tickets ($40 advance/$50 day-of).

Saturday in Loring Park: Pride in Concert with the Pointer Sisters and Adore Delano. The R&B soul singers and the former American Idol contestant and drag queen. Plus fireworks after. Gates at 5 p.m. $10 general admission (18+), $75 VIP (21+). Tickets here.

And don’t forget “How Love Won: the Fight for Marriage Equality in Minnesota,” showing at the Film Society’s St. Anthony Main Theatre. FMI, times and tickets. If you don’t catch it during Pride, you’ll still have time; it ends next Thursday.

Starts tonight at the Brave New Workshop: “Lady and the Trump.” BNW’s 2016 election show gets the Best Title prize. From now until July 6, it’s in previews; opening night is Thursday, July 7. Caleb McEwen directs cast members Lauren Anderson, Andy Kraft, Ryan Nelson, Tom Reed and Taj Ruler in an evening where everything will be satirized, and they have plenty of material to choose from. FMI and tickets ($28-$36). 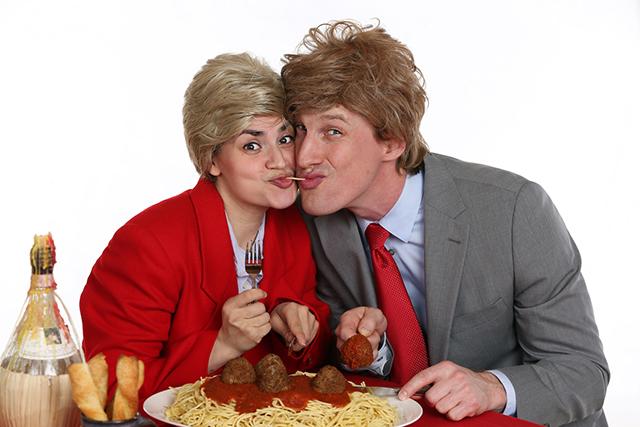 Photo by Dani Werner
“Lady and the Trump”

Opens tonight at the Guthrie: “South Pacific.” Rodgers & Hammerstein’s classic musical romance was already in the Guthrie’s pipeline, a pick from the Dowling days, when Joseph Haj was named artistic director. Haj didn’t just leave it on the schedule, he signed on as director. Set on an island during World War II, it’s full of great songs including “Some Enchanted Evening.” 8 p.m. FMI and tickets ($39-$84). Ends Aug. 28.

This weekend at the Landmark Center: Summer Arts Discovery. See work by a dozen Minnesota artists, watch artists in action in scheduled workshops and explore parts of the Landmark Center you haven’t seen before. (Did you know that in the ’60s this magnificent building was almost torn down and replaced by a parking lot? Lucky it wasn’t in Minneapolis.) This year’s artist’s are Norman Andersen, Michael Bahl, Philip Blackburn, Angela Davis, Ann Klefstad, Keren Kroul, Sharol Nau, Judd Nelson, St. Paul Slim, Cecilia Schiller, Asia Ward and Chris Williams, a diverse group working in many media. Blackburn, a sound artist, will be creating a new work over the summer that will become part of the Center’s permanent art collection, which also includes a sculpture by Louise Nevelson. Exhibit hours are the same as regular building hours: Monday-Friday 8 a.m. to 5 p.m., Thursday until 8 p.m., Saturday 10 a.m. to 5 p.m., Sunday noon to 5. This Saturday (June 29), you can attend a workshop by Sharol Nau that starts at noon. FMI. Ends Aug. 31.

Saturday at the Commemorative Air Force Minnesota Wing: “Top Gun.” A 30th anniversary screening of the iconic film, in a live airplane hangar filled with WWII bombers and fighter planes, with full concessions and a beer garden. Dress in character for a chance to win prizes. Doors at 7 p.m., movie at 8:30. At 310 Airport Rd., Hangar 3, Fleming Field, South St. Paul. FMI and tickets ($14.00). 12 & under free.

Tuesday at the Amsterdam: Presidential Debate Jeopardy. Hosted by The Theater of Public Policy, the group that uses improv to explore serious topics, this should be wonky fun. Listen as Presidential debate expert Dan Hill grills three smart, quick-thinking comedians (including T2P2 cast members) on past debates: the one-liners, the game-changers, the unforgettable moments. Doors at 6 p.m., show at 7. FMI and tickets ($10 advance, $12 door). Also Thursday, June 30, at the Amsterdam, and Thursday, July 7, this time at the Southern.

Tuesday at the Southern: Aimee K. Bryant and James A. Williams Present Works in Progress. Both Bryant and Williams are 2015-16 McKnight Theater Artist fellows. This is their chance to show us what they’ve been up to. Bryant’s still untitled work is a one-person show with music, featuring real life superheroes and exploring themes of relationships, identity and loss. Directed by Derrick Sanders, with Tom West on piano. Williams’ “Kenya Karibu” recounts his first visit to Kenya in 2004. With Traci Allen Shannon, Antonio Duke and Williams; directed by Rick Shiomi. 7 p.m. Free. FMI and reservations (click “sign up”).

Wednesday at St. Paul Seminary: The Rose Ensemble: “Il Poverello: Medieval and Renaissance Music for St. Francis of Assisi.” Long story short, the seminary is hosting a conference on the environment that will highlight teachings of St. Francis and Pope Francis, and the conference will open with this concert, free to all, but you must reserve your tickets by Monday, June 27. 7:30 p.m. in St. Mary’s Chapel. FMI (including where to park free) and tickets.