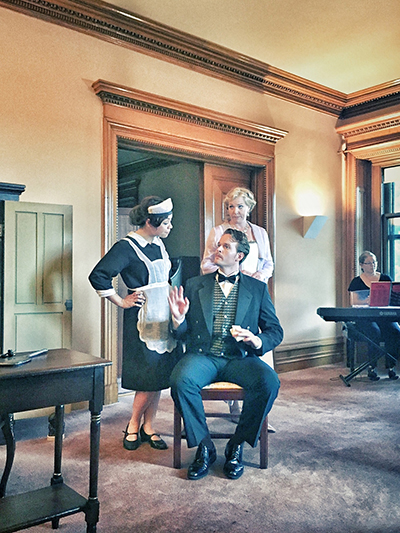 Photo by veramarinerstudio
Left to right: Tess Altiveros, Gabriel Preisser and Karin Wolverton, with Mary Jo Gothmann at the keyboard in “The Marriage of Figaro.”

When you stage one of the world’s great operas somewhere besides an opera house – say, for example, in a massive, historic, stone-clad Romanesque mansion in St. Paul – and move the action from room to room, something has got to go. For Mozart’s “The Marriage of Figaro,” now at the James J. Hill House, it was the orchestra.

Last Thursday during the final dress rehearsal, as the cast and audience traveled from a former servants’ room on the third floor to a bedroom on the second, the main entrance hall and a vast outdoor terrace, so did music director Mary Jo Gothmann, who played a reduced score on electronic keyboards and a piano. It was a heroic, virtuosic and no doubt exhausting feat. Ms. Gothmann, we salute you — and the whole crazy team who imagined and carried off a thrilling, exuberant, up-close-and-personal “Figaro” we’ll never forget.

Stage director Bob Neu and baritone Gabriel Preisser (who sings the title role) came up with the plan during an impulsive tour of the Hill House a year ago, then partnered with the Twin Cities Opera Guild to bring it off. As co-founders of Angels & Demons Entertainment, Neu and Preisser produce concert and semi-staged operas and musicals for symphony orchestras. To them, it made perfect sense to put “Figaro” in the Hill House, a place once shared by servants and their masters.

At the opera’s heart is the notion of “droit du seigneur,” a supposed feudal custom that gave the lord of a manor the right to sleep with a servant woman on her wedding night. In “Figaro,” Count Almaviva is determined to have his way with Susanna, a chambermaid, who’s about to marry Figaro, his valet. Everything in the opera – the plot twists and subplots, cross-dressing, assumed identities, ruses, revelations, mad rushes to hide in closets and even a jump out a window – whirl around the question of whether the count will succeed.

The original language of the opera, Italian, also had to go, since supertitles were impossible under the circumstances. This “Figaro” is sung in English, and the translation is delightful. Because there’s no orchestra – and there were times (apologies to Gothmann) when we missed the lush, sensuous glories of Mozart’s full score – this production pulls your focus to other things: the voices, of course, then the imaginative staging, the simply propped sets that never feel too spare, and finally, because you’re so near the cast, to subtleties you might miss in a concert hall: flickering facial expressions and gestures, the precision with which the voices interlace in duets and ensemble pieces, the hard work of singing this demanding, complicated music, and the joy everyone brings to it.

This “Figaro” demands and rewards closer than usual attention to the singing, with deliriously happy results. Preisser is a dashing, clever Figaro (we’ve seen him here in “Carousel” with the Minnesota Orchestra); Seattle-based soprano Tess Altiveros an alluring Susanna; baritone Andrew Wilkowske an imposing, sometimes threatening Count (he was Sharpless in the Minnesota Opera’s “Madame Butterfly,” Tonio in Mill City Summer Opera’s “I Pagliacci,” and sang “Carmina Burana” with the Minnesota Orchestra); Karin Wolverton a regal, sorrowful Countess. Wolverton sang the world premiere of “Silent Night” with the Minnesota Opera and will return in 2016-17 for “Das Rheingold.” We can’t wait to see and hear her again. If anyone in “Figaro” embodies true nobility, it’s the Countess.

Former Minnesota Opera resident artist Adriana Zabala is sweetly randy as Cherubino, one of opera’s most famous breeches roles. Victoria Vargas, also a Minnesota Opera resident artist we’ve seen many times (in “The Manchurian Candidate,” “Carmen,” “Madame Butterfly” and Dominick Argento’s “The Dream of Valentino,” to name a few) and who sings Emilia in this year’s Sommerfest opera closer, Verdi’s “Otello,” is terrific as Marcellina, who yearns to marry Figaro, then discovers how wrong that would be.

Rounding out the 10-member cast are James Ramlet as Bartolo, Paul R. Coate as both Basilio and Don Curzio, and Quinn Shadko as an effervescent Barbarina.

We saw “Figaro” with 35 students recruited by the Twin Cities Opera Guild, which provided financial support for the production, helped with promotion and made sure the students were prepped. While some cuts were made to Mozart’s original, this was still a 2½-hour opera, not something your average high school or college student would be up for. This group was altogether engaged and respectful, and they had a good time. Maybe we’ll see some of them at the Minnesota Opera’s “Romeo and Juliet” in September. Or at a future site-specific Angels & Demons production, about which the company is already dropping hints.

Two performances of “Figaro” remain, on Thursday and Friday, July 14 and 15. Both are sold out. You can add your name to a waiting list by email or phone. Tickets are $150 and include champagne after the performance.

We finally know the State Fair’s entire Grandstand schedule. The last open slot – Thursday, Sept. 1 – has been filled with country rockers, Grammy, CMA and ACM winners, frequent chart-toppers and Country Music Hall of Famers Alabama. This will be their 19th time at the Grandstand, more than any other group or performer in State Fair history.

Tickets go on sale at 10 a.m. Friday ($50/$40). Levon opens (no, not the singer Levon Helm, who died in 2012, but a group named partly in his honor, partly for Elton John’s song “Levon”). View the whole Grandstand lineup here. Sorry, the Dixie Chicks have long been sold out for both nights.

Now at the Orpheum: “The Lion King.” The highest-grossing show in box office history (at the moment, eight productions are running concurrently around the world), “The Lion King” roars back to where it was born in 1997. Directed by Julie Taymor, who also created the distinctive costumes and masks, it’s kind of a must, especially if you haven’t yet seen it. 7:30 p.m. FMI and tickets ($49-$154). Through Aug. 7. Note: The matinee performance on Saturday, July 30, is sensory-friendly. Tickets start at $30. 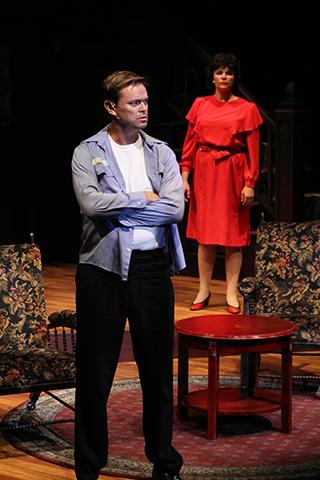 Tomorrow (Wednesday, July 12) at Depot Park in Wayzata: Davina and the Vagabonds. Having recently released a new live album, the high-energy blues, sass and soul singer/pianist and her band touch down briefly after a night in Brooklyn, New York, and just before leaving for the Edinburgh Jazz Festival. This is their schedule; we’re not making it up. Part of Wayzata’s annual Music by the Lake series. 402 E. Lake Street. 7 p.m. Free.

Tomorrow at Crooner’s: Maud Hixson “Listening for Your Song” CD release. Hixson, a singer with a voice like satin sheets, grew up reading the Betsy-Tacy books by Maud Hart Lovelace. So did her mother, who named her daughter after the Mankato-born author. The books are filled with references to songs popular during Lovelace’s day – more than 200, dropped into the narrative, woven into the plot, providing a soundtrack you hear in your mind as you read, if you know them. Funded by the Betsy-Tacy Society through a Kickstarter campaign, “Listening for Your Song” is subtitled “a musical companion to the Betsy-Tacy books by Maud Hart Lovelace,” but it stands alone as a collection of 20 songs from the early 20th century, when people gathered around pianos and campfires, at picnics and dinners to sing the latest tunes. Most are forgotten today, but some are still around: “Alexander’s Ragtime Band,” “My Wild Irish Rose,” “In the Good Old Summertime.” Hixson loves a good historic song and the chance to research it deeply, so this outing – accompanied by her husband, the intuitive pianist and arranger Rick Carlson – is totally her cup of tea. And yours, if you enjoy well-crafted tunes impeccably performed. In Crooner’s Dunsmore Room, meant and made for listening. 7 p.m. FMI and tickets ($10, $35 dinner show).