During a rehearsal Wednesday with the Minnesota Orchestra of a lively dance by Alberto Ginastera, conductor Andrew Litton leapt into the air several times. He was suffering from jet lag – he recently returned from Paris, where he led several performances by the New York City Ballet as its new music director – but you couldn’t tell from watching him. And it wasn’t evident during his lunch break, when he spoke of Sommerfest and why he keeps returning to Minneapolis in July.

Litton has been Sommerfest’s artistic director for 13 years, 14 if you count the lockout year. For orchestra fans, he’s part of the fabric of summer in the city. He spent 12 years with the Dallas Symphony Orchestra and 12 with the Bergen Philharmonic in Norway. He once told Playbill, “There’s a shelf life with conducting. If you stay longer than 12 years, you’d better make a plan to stay a lifetime.” How have we held onto him since 2003?

“This is one of those situations where it’s short enough and there’s enough variety that we don’t get tired of each other,” he said. “By the time I breeze in here every July, everybody’s like, ‘OK, it’s the summer guy.’ Everybody in the orchestra is ready for the kind of madness that Sommerfest engenders, but also the kind of fun, spontaneous music-making that I believe in and that actually is very easy to do with an orchestra of this stature and standard.”

In Paris, he led an orchestra of young musicians. “Having spent the last three weeks working with young players, to come in this morning at first rehearsal and just start conducting, and all this stuff is happening exactly where it should at the right time in the right place, and in tune, I’m like … wow. I love working with young people, too, don’t get me wrong, but it is nice when you get the limo.”

The “madness” of Sommerfest is the number of concerts – 11 unique programs over eight days– and the speed with which it all happens. Litton is front and center in nine of the concerts, as conductor or pianist. Between Friday and Sunday, he’ll lead two symphonic concerts and play piano in two chamber music concerts.

“It’s challenging for me,” he said, “but we all put our necks on the line with Sommerfest, and that’s part of what makes it exciting. This is not the luxury of four or five rehearsals. This is two, three of you’re lucky. So you make good as fast as you can and rely on everybody’s talent the rest of the time – talent and good will.” 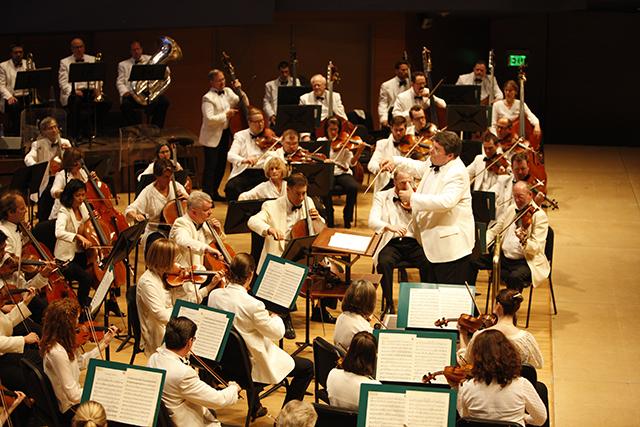 Photo by Joshua Kohanek
Litton has been Sommerfest’s artistic director for 13 years, 14 if you count the lockout year.

As artistic director, Litton chooses the programs and the soloists, “and then I run it all by everybody here. Since the lockout, the musicians have gotten much more involved with the day-to-day programming. It used to be just me and the vice president, and then marketing would weigh in. Now the players weigh in as well.”

Does that complicate things? “I spent 12 years working in Norway, where there are committee meetings to have committee meetings, so it doesn’t faze me at all. In fact, it’s kind of nice to share the blame. If something doesn’t work, I can point to someone and say, ‘This was your idea!’ I’m joking. Everybody buys into the final result, which is terrific. It’s not just about what Andrew wants. It’s about what’s good for the organization and what everybody here wants.”

What’s new about this Sommerfest? “This is the first time in 12 years that I haven’t done a Johann Strauss concert. The artistic committee thought it was time to give Strauss a little break.” Sorry, folks, no “Blue Danube.”

The Shakespeare theme is also new. “Of course everybody’s doing Shakespeare because of the anniversary” (the 400th anniversary of his death). “We’re doing the ‘Midsummer Night’s Dream’ overture [by Mendelssohn], and we have Verdi’s ‘Otello’ to close, which is one of the greatest, if not the greatest, Shakespeare settings that anybody’s managed as a composer. It’s one of my five favorite operas that I haven’t done before, and I cannot wait. I’ve wanted to conduct this piece for decades.”

Litton’s original plan for operning weekend was to present a new young soloist, Chinese pianist Zhang Zuo, known as Zee Zee, and also welcome the return of veteran artist André Watts. Watts injured his back and is unable to travel, so Zhang Zuo will perform both nights and the program has been changed. “I got to work with Zee Zee in London last October, and I suddenly thought – she would be brilliant for Sommerfest, young and engaging, attractive and very talented.”

Also making their Minnesota Orchestra debuts, thanks to Litton, are violinist Nicola Benedetti and cellist Leonard Elschenbroich. “They are amongst the most brilliant young soloists in Europe today, and the fact that they’re a couple is fun and lovely, but they’re also great people. I love to bring people to Sommerfest I think the audience will find warm and engaging, and of course I’m going to make them talk. I always make them talk.”

What does the maestro consider the perfect Sommerfest concert? “One where the orchestra is in great form, the audience is loving it, there’s a great buzz in the house and then beautiful weather outside afterwards, so we can all go and enjoy the summer breezes.”

A leading conductor of his generation, Litton travels the world, guest-conducting major orchestras and opera companies. (Take a look at the list on his website.) Talking with him, you get the sense that he has real affection for Minnesota. “When I first started here, my kids were little, so I almost have a family connection with this place. It feels like home. … I love the support this community has for the arts in general. It’s quite unusual, once you get out of New York, to have this sense of pride in not only the [Minnesota] Orchestra but the [St. Paul] Chamber Orchestra and the art museums and the theaters. … Things are culturally at such a high level here that for somebody like me, coming in once a year, it’s very exciting. So I love coming back. I hope it goes on for a long time, but you never know.” Litton’s current contract continues through summer 2017.

Sommerfest begins this Friday, July 8, with a night of dance music by Copland, Liszt, Saint-Saens, Ginastera and Ravel. View the complete schedule here. If you go, plan to arrive early and stay late for free live music before and after the concerts, happy hour specials, food from vendors on the plaza and interactive Experience Cafés in the lobby. You can dress up if you want, but no one will care if you don’t. It’s summer.

Maestro Andrew Litton takes us behind the scenes of Sommerfest 2016