Several members of Southwest High’s Class of ’60 will have to find another summer outing. For years, they’ve met at the Minnesota Centennial Showboat at Harriet Island to see a melodrama staged by University of Minnesota students. Nothing compares to climbing the ramp onto the boat, walking through the door and into the past, booing the villain, cheering the hero, then stepping out onto the deck for breathtaking views of the glittering Mississippi and the St. Paul skyline at night.

It’s enjoyable, it’s magical and its days are numbered. After more than 50 years, the U’s Department of Theatre Arts & Dance has called for the final curtain. When the current production of “Under the Gaslight” ends on Aug. 27, so will a sweet summer tradition.

The rush to see something before it’s gone for good, which should help sell tickets, isn’t the only reason to get on board for “Gaslight.” It’s tough to find a working showboat these days. (There’s still one in Clinton, Iowa, but where else?) The 225-seat, Victorian-style St. Paul theater, complete with grand staircase, is an opulent little gem.

And “Gaslight” is a delight. True, it’s old-fashioned and un-PC. One reason the U’s theater department gave for pulling the plug is the need to “move away from the nineteenth century melodrama format with its often problematic social conventions.” Director and adapter John Miller Stephany called foul on that in an interview with the Star Tribune’s Graydon Royce, saying, “People who dismiss melodramas are elitist.” Or, as character Pearl Courtland (Mackenzie Shaw) might say, “Pshaw!”

Written by Augustin Daly in 1867, “Gaslight” is a tale of class differences, love, greed, honor, bravery and a switcheroo that’s put right just in time. The play is celebrated partly because it’s believed to be the first in which someone is tied to railroad tracks, for which the creators of Dudley Do-Right must be thankful.

There’s a fairly large student cast in the Showboat’s production – a dozen or so, if we counted correctly. Olivia Wiluze gives a strong performance as the heroine, Laura Courtland, whose demeanor and views are more 21st century than one would expect. As courageous, kind-hearted, one-armed Civil War veteran Snorkey, Austen Fischer tugs at our heartstrings. We really want things to turn out well for him, especially when he’s tied to those tracks. Ryan Dean Maltz is Ray Trafford, Laura’s fiancé (at first), constrained by social class. It takes a while for the plot to tangle and untangle, but it’s fun to watch, and this feels like a no-holds-barred production, with excellent sets, elaborate costumes and perfect piano accompaniment led by musical director Andrew Cook.

And we haven’t even mentioned the olios, the between-scenes song-and-dance bits that have nothing to do with the play but everything to do with a Showboat show. The olios in “Gaslight” – there are nine, plus a finale that may count as the tenth – get progressively more outrageous. They include three attempts to perform Chopin’s “Minute Waltz” within a minute, a totally over-the-top take on the old song “I Need a Girl for Each Month of the Year” (September’s girl wears a State Fair costume complete with mustard-squiggled corn dogs), and dancing glow-worms whose glows brought howls of laughter. 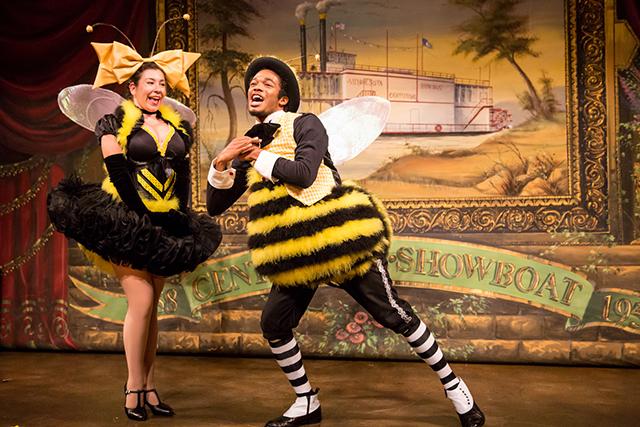 “Gaslight” was the first play produced in the Showboat program, so it’s fitting that it’s also the last. The finale, which Daly could not have imagined, is both hilarious and bittersweet. Can we hope that someone will swoop in with a plan (and the dollars) to save things? Probably not. Sorry, Southwest High Class of ’60, and everyone else who will miss this beloved annual blast from the past.

CORRECTION: An earlier version of this piece named Vern Sutton as the director of the olios in “Under the Gaslight.” Sutton served as “olio consultant.”

Strike up the band, ma’am

In better, brighter U of M news: The School of Music has named a new director of marching and athletic bands, and it’s not business as usual. Elizabeth (Betsy) Kerns McCann is the first female director of a marching band in the Big Ten.

A Minnesota native, McCann started with the U of M Marching Band in 2013 as assistant director. She previously led high school bands in Watertown, Burnsville, and Aurora, Illinois. Director of Bands Emily Threinen said in a statement, “Betsy … has led the U of M Marching Band to new heights and we’re excited for the future of the Pride of Minnesota under her leadership.”

McCann succeeds Timothy Diem, who has accepted a new position in Rockford, Minnesota, after 16 years at the U as marching band director and assistant director of bands.

Tonight (Friday, July 15) through Sunday at Open Eye Figure Theatre: “ ’66: Talkin’ ’Bout My Generation.” A look back at the music, news and commercials of 50 years ago, presented like a radio show. Written and performed by vocalists Prudence Johnson, Bradley Greenwald and Diana Grasselli and pianist Dan Chouinard, with guitarist Dean Magraw and bassist Gary Raynor. The year 1966 seems like forever ago, but it’s a lot closer to our own turbulent times than we think. Friday and Saturday at 7:30 p.m., Saturday and Sunday matinees at 4. FMI and tickets ($26-$18). Ages 12+.

Saturday in St. Paul: 33rd Annual Rondo Days Festival. The yearly celebration of St. Paul’s historically black community, split in two in the 1960s by the construction of Interstate 94. The Grande Parade starts at 10 a.m. at St. Peter Claver and winds its way toward the Rondo Education Center. Here’s the map. The festival – with live music, dancing, and family activities – takes place at Dale & Concordia from 11 a.m. to 6 p.m. This Saturday would also have been Philando Castile’s 33rd birthday; there will be a tribute and a moment of silence. FMI.

Saturday in Minnesota and Western Wisconsin: Eat Local Farm Tour 2016. Want to know more about where your food comes from? Twenty-nine farms will open their doors to visitors, answer questions, and offer activities for kids. Be sure to bring a cooler for those farm-fresh goods you find along the way. Sponsored by local co-ops including the Wedge, Seward, Linden Hills and Mississippi Market, this is a self-guided tour. Download a guide or pick one up at a co-op near you. 10 a.m. to 4 p.m. FMI.

Saturday and Sunday in Aitkin, Brainerd and Crosslake: Lakes Area Music Festival Prelude Series Concerts. The LAMF officially begins in Brainerd on July 31. The Prelude Series gives music-lovers in surrounding communities a taste of what’s to come, with music by Debussy, Britten, Beethoven and Shostakovich performed by festival musicians. The Prelude Series continues next weekend in Mottley, Deerwood and Nisswa. All concerts are free. FMI including times, places and musicians performing.

Saturdays and Sundays on Lake Phalen near Phalen Park Beach: The Floating Library. Coolest. Idea. Ever. Row, sail, kayak or paddle to artist Sarah Peters’ interactive public art project, now in its fourth year (and first on Lake Phalen). The custom-designed raft is staffed by volunteer librarians and fitted with bookshelves that hold artist-made books, ’zines, chapbooks, pamphlets, “bookish sculptural objects” and commissioned works from local and national artists including Aaron Johnson-Ortiz, currently artist-in-residence at the East Side Freedom Library. Drift nearby and read, or check out books to return later to the raft or a book deposit box on the beach. Saturdays and Sundays, 1-7 p.m. Through Aug. 7. FMI. Free. 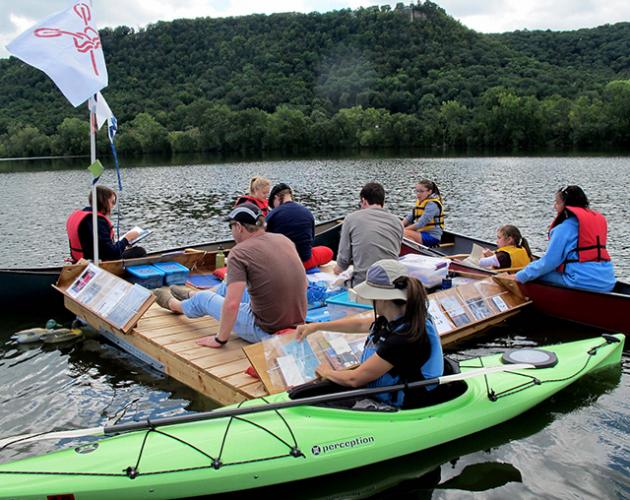 Sunday in and around Barbette: Bastille Day Block Party. Eat, drink, listen, dance, have some cake. With an imaginative lineup (including Astronautalis, Babes in Toyland, the Brass Messengers and the Inflammati Fire Circus at dusk), organic picnic foods, cold beverages and a local artist market, this promises to be an excellent time. 2:45-10 p.m. FMI. Free.

Closes Sunday at MCAD: “In Words and Pictures: Minnesota Women Author-Illustrators.” Eek, we should have told you about this ages ago (it opened June 17) but sometimes we blink and miss something. We know there are tons of actual and aspirational children’s book authors and illustrators out there, so make time if you can to see this show of drawings, manuscripts, storyboards and finished original artwork by Betsy Bowen, Nancy Carlson, Wanda Gág, Carrie Hartman, Marie Olofsdotter, Mia Posada and others. In the second floor galleries. Friday 9 a.m.-8 p.m., Saturday 9-5, Sunday noon-5. FMI. Free.