On Aug. 19, the same day Donald Trump comes to Minneapolis, something even more unpredictable will happen in St. Paul.

Improvisation, and lots of it. Live and in person, outdoors in parks, indoors in office buildings, on street corners and sidewalks, in skyways and front yards. A brand-new, kind of crazy event called “All St. Paul’s a Stage” will bring improv almost anywhere in the capital city.

The Knight Arts Challenge winner is the brainchild of Gustavus Adolphus grads Brandon Boat and Tane Danger, co-founders of The Theater of Public Policy (T2P2) and Danger Boat Productions. They pitched the idea to Knight, which gave them a $15,000 grant, half of their $30,000 budget. St. Paul’s Cultural STAR program chipped in another $5,000. Boat and Danger are raising the rest.

On the 19th, some 50 improvising actors will fan out across the city in teams of three, performing up to 300 live, unscripted “improvgrams” 5-8 minutes long. You can send one to anyone you choose, as long as the person is in St. Paul. (You can also send one to a place or a thing. More about that shortly.) Think of someone worthy. Buy your improvgram online for $15. Provide some prompts for the improv scene. Then show up, if you want, to observe and take pictures or video.

It’s something no one (as far as Boat and Danger know) has done before. We had some questions for the two of them and spoke by phone late last week.

MinnPost: Why are you doing this?

Brandon Boat: Number one, because it sounds like fun, and that’s a good reason for doing almost anything. This is something I would want to be part of if somebody else was doing it.

Tane Danger: We love improv. It’s one of the most amazing and beautiful art forms out there, and it’s something a lot of people have one or two experiences with. So we’re always thinking about how we can bring improv to new communities. This is one of the most radical and exciting ways we’ve ever thought of. Instead of getting people to come see a show, we’re flipping the script and bringing theater to them.

BB: We’ve been doing shows professionally for the last five years, and not all have been on a stage or in front of a big audience. We’ve performed outside, in a gazebo, or on a windowsill in front of a coffee shop. We want people to start thinking more about what can be a performance space. Where should art be allowed? Should it only be in designated areas, or is it OK to color outside the lines?

TD: We’re asking people to reimagine the role of art in their daily lives. Is it something you have to set aside time for and make it a special occasion? Or is it something that can just be part of every day?

MP: What has been the most complicated part of this plan so far?

TD: Both Brandon and I are improvisers, so I say this with a lot of love, but artists and improvisers can be a little hard to pin down logistically and on details. Trying to wrangle 50-plus performers and scheduling them to have rehearsals and know exactly what they’re going to be doing for a day of a dozen performances each – that was tricky. We’re not done yet, so it’s still tricky.

BB: When we got the [Knight] grant, I was like, “This is going to be amazing!” But part of my mind was thinking, “Oh, no, now you’ve got to figure out how to do this.” I want to make sure it goes off without a hitch. We’re hoping to figure out all the wrinkles so we can do this again someday. We definitely hope this isn’t the last of us turning an entire city into a stage.

[Note: By “entire city,” they mean all 53.6 square miles of St. Paul. Their improvisers will go anywhere.]

MP: Is St. Paul helping in any specific way?

BB: They’ve tweeted about it. They haven’t tried to stop us. We’re hoping that as we get a little closer and some of the excitement ramps up, we can get them to be a bit more involved. I would love it if some City Council members used an improvgram to send a message to the park in their district.

MP: Do you have a limit on how many improvgrams can be sent to certain people? Will Mayor Coleman and Gov. Dayton be swamped?

TD: We don’t have a limit. If for some reason 50 are going to Mayor Coleman, and he’s been standing there for an hour and says, “I can’t do this anymore” and walks away, we’re not going to chase him and hold him down for the rest of the afternoon. We’ll probably keep performing on the steps of City Hall and hope he comes back. 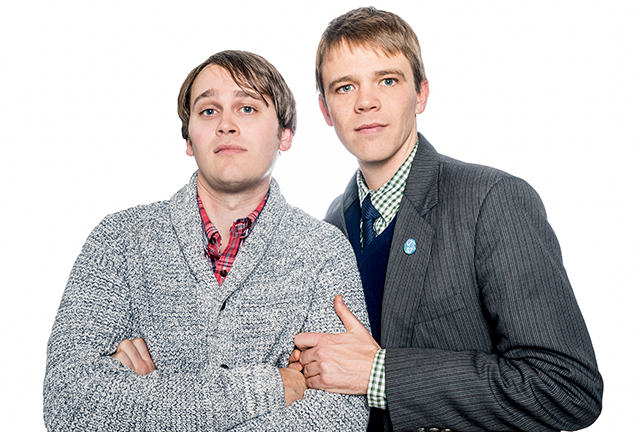 MP: Have you gotten any really unusual requests?

BB: The range of requests is very interesting. Some are heartfelt, some are out-there strange, and some are more traditional – “I want you to go to my office because my team has been doing well. Do a fun show to get them riled up for the rest of the month.”

MP: Are there any you’re dying to do even if no one asks?

BB: I’m interested in the more conceptual ones, sent to different places or locations. Do we perform at bus shelters? If someone wants to send one to Minneapolis on the fringe of St. Paul, do we go stand on the Marshall Bridge?

TD: I’m hoping people get creative. The most obvious ones, sent to a person or group of people, are the vast majority of what we’ve gotten so far. But you can send one to a structure or a place, or really anything you can think of. For example, send one to the Landmark Center at lunchtime and bring the history of the Landmark Center to light for everyone who’s eating lunch in the café.

MP: Or the F. Scott Fitzgerald statue in Rice Park . . . Will you be out delivering improvgrams yourself or running everything behind the scenes?

TD: Our hope and our goal is to get out and deliver a few of them, particularly ones that really pique our interest. We’re improvisers, so we’re going to play it by ear as to how the day is going and whether we can sneak away from HQ long enough to do that.

BB: We want to support the rest of our performers as much as possible, so being there if and when they need us is the most important thing. But if it gets to be later in the day and things are running smoothly, then yes, we definitely will.

MP: Do you have any tips on how to order an improvgram that’s likely to work out well?

BB: Think about what you love about a place or a person. Provide a suggestion that has some passion in it.

TD: Think about a place or neighborhood you know and you wish more people knew. Maybe there’s a story about Mears Park you know that nobody else does. For $15, you literally have an entire theater troupe at your fingertips that will show up and broadcast your story to everybody in the park.

MP: You’re probably glad Donald Trump is coming to Minneapolis and not St. Paul on that day.

TD: No! The opposite! It would be good for orders! In more seriousness, and I’ve put this on Twitter and Facebook, you can have a team go to the edge of St. Paul and do a scene directed towards wherever Donald Trump is on that day, inspired by him. That could be fun.

Improvgrams will be delivered/performed on Friday, Aug. 19, from 8 a.m. until approximately 5 p.m., rain or shine. Deadline for ordering: Monday, Aug. 15. That can flex a bit, but Boat and Danger hope everyone won’t wait until the evening of Aug. 18. Improvgrams are available in English, Spanish, Hmong or Somali. All of the performers will be paid; that’s where most of the budget will go. Nonprofits serving low-income communities in the St. Paul area, go here to apply for Golden Tickets  – free for those to whom the $15 cost is a barrier to participating. FMI.