Artists in the Twin Cities metro with vibrant, under-the-radar, self-organized projects have a new source of potential funding. More than $50,000 will be available to artists through a new grant program called the Visual Arts Fund (VAF). Established by Midway Contemporary Art with support from the Andy Warhol Foundation, the VAF will support experimental, innovative and diverse projects that might not happen otherwise.

Five $5,000 grants and three $10,000 grants will be awarded annually to artists whose projects are accessible to the public and take place outside of established arts programming. Projects could include exhibitions or installations held in temporary spaces, new publications, a series of events or performances, digital initiatives, public art projects, and other activities related to the visual arts. VAF is not for individual artists presenting their own work, projects that are part of a nonprofit’s programming, projects at commercial galleries or those that are not publicly accessible. Collaborations and groups are welcome to apply.

The online application will open Sept. 1. Grant submissions are due Oct. 16. Grantees will be announced in Dec. 2016, with projects beginning in 2017. A series of informational sessions is now underway, with the next one taking place Saturday (Aug. 27) at 2 p.m at the Rondo Community Outreach Library. The other information sessions are listed here.

Last week we learned the guest authors for grown-ups who will appear at this year’s Twin Cities Book Festival in October. Now we know who’s coming for the kids, tweens and teens.

Preschoolers and up will love meeting Stephen Shaskan and Trisha Speed Shaskan, creators of the rockin’ “Punk Skunks.” KARE 11’s Belinda Jensen will share and sign her “thunderously popular” (not our words, wish they were) Bel the Weather Girl books. (Now every little girl will want to grow up to be a meteorologist.) Caldecott winners Philip Stead (“Samson in the Snow”) and Erin Stead will be there, and author Michelle Cuevas (“The Uncorker of Ocean Bottles,” illustrated by Erin Stead).

The middle grade line-up includes Stuart Gibbs, author of the Spy School adventures; M.A. Larson, writer of the rebooted “My Little Pony” TV series; and Sarah Mlynowski of the Whatever After series. Plus local faves Brian Ferry (“The Secrets of Dreadwillow Carst”), Kelly Barnhill (“The Girl Who Drank the Moon”) and Abby Cooper (“Sticks & Stones”).

Improvgrams are a hit in St. Paul

Last Friday, Aug. 19, teams of improvisers spread out through St. Paul to deliver something called “improvgrams.” Think singing telegrams, except these were live, unscripted sketches performed by actors: one-time-only, in-the-moment scenes taking place in office buildings and parks, on sidewalks and the light rail. An idea dreamed up by Brandon Boat and Tane Danger, co-founders of The Theater of Public Policy (T2P2), it won a Knight Arts Challenge Grant, and Friday was the day.

After previewing the event, called “All St. Paul’s a Stage,” we wanted to know — how did it go? 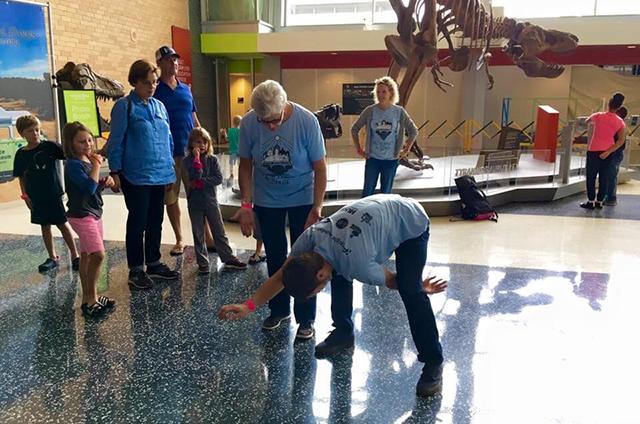 “It was wonderful, more joyous and delightful than I think any of us could have imagined,” Danger said. With 50 improvisers, they had the capacity to deliver (perform) up to 300 improvgrams. The total number ordered was 120 (at $15 each) — not as many as they hoped, but still pretty good, given this was the first time anyone had ever tried this anywhere.

With the Knight grant money and the match Boat and Danger raised, they were able to pay the artists $20,000. “When we handed one performer her check,” Danger said, “she told us, ‘I’m 70 years old, and this is my first paycheck as an artist.’ ”

Improvgrams were delivered to the James J. Hill Center, Crossfit St. Paul, Raspberry Island, Mears Park, the Minnesota Department of Administration and the Science Museum, to name a few. One went to KSTP, where it was performed for the 15-person news team. Three were ordered for Springboard for the Arts.

“One was delivered to an office,” Danger said, “and the team was led into a meeting room, where it became apparent they were intruding on a tense meeting. They pushed through that and did their scene to lots of laughter. As they were leaving, one of the staff pulled a performer aside and said, ‘Thank you. We really needed that today.’ ”

Audiences ranged from five people to 125 Macalester College students having lunch in a cafeteria. “They politely stopped eating to watch the show,” Boat said. An improvgram sent to the front yard of a private home turned into a performance for the neighborhood. “They knew it was coming,” Danger said, “so they invited friends and neighbors and set up a little stage.”

Before last Friday, Boat said, people were presenting them with worst-case scenarios – things that could and might go wrong. “But we only had four improvgrams that couldn’t be delivered because people asked us to leave or not perform in that space.”

“One was at a chain coffee shop,” Danger said. “The manager said, ‘I don’t think we’re allowed to have something like this in here.’ So the improvisers did the scene outside. People on the street stopped and watched.

“Someone delivered one to the Capitol Press Corps office. That was the same day Trump was in town. A lot of the press corps was gone. The two reporters there said, ‘We’re on deadline!’ ”

Would they do it again? Definitely. “We’ve figured out a lot of the process,” Boat said. “How we need to organize ourselves, what makes the likelihood for successful delivery. It will go more easily next time.”

Danger added, “If the mayor of Honolulu wants us to come and do ‘All Honolulu Is a Stage’ for the day, we’d love to. Especially in February.”

Every day of the Fair: Minnesota State Fair History Walking Tour. Did you know the Skyride has been around since 1964? Walk off some of those corn dogs and fries on a self-guided walking tour from the Minnesota Historical Society. Download or pick up a tour brochure, use the smartphone version (with audio and visuals), or call and listen to the cell phone tour at 877-411-4123. And stop by the MNHS booth in the Education Building. (If you visit eight or more walking tour stops, you’ll get a prize.) 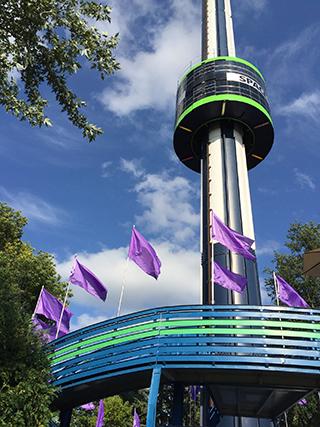 Tonight (Friday, Aug. 26) at the Fair: Unite in Purple. There’s a lot going on every minute of the Fair, but tonight is the night to go if you’re a Prince fan. Musicians at stages throughout the grounds will play Prince music, tributes and covers. Fair buildings and rides will be washed in lavender lighting. A Prince Party in the Park (Carousel Park) from 8-11:30 p.m. will feature music and dancing led by Prince’s personal tour DJ, Dudley D. The closing fireworks will be set entirely to Prince music. Here’s a list of everything to look for. 5 p.m. to close. Expect bag checks and extra security at the gates (not just tonight, but all the Fair long).

Tonight through Sunday at Bedlam Lowertown: The 4th Annual Big Lowdown. Imagine you’re a newly arriving immigrant in the fictional land of Upportornia. Then follow a team of immigrant performers through the alleys and storefronts of Lowertown. A collaboration between Bedlam, Live Action Set and Dangerous Productions, this interactive performance is based on the real-life stories of recent immigrants. Each evening ends with dancing and music. For all ages and speakers of all languages. Friday through Sunday at 7:30 p.m., Saturday and Sunday afternoons at 3 p.m. FMI and tickets ($20). (Click “More” to see the tickets link.)

Tonight through Sunday at the Bryant Lake Bowl Theater: Sundance Film Festival 2015 Short Film Tour. Eight short films from this year’s Sundance include fiction, documentary and animation from around the world. Presented by IFP Minnesota. Friday and Saturday at 7 p.m. (doors at 6), Sunday at 5 (doors at 4:30). FMI and tickets ($8/$6 IFP members).

Sunday at the Jungle Theater: Jazz at the Jungle: The Best of the Best: The Ella Fitzgerald Songbooks. Tanner Taylor is back in town, playing piano as Connie Evingson sings favorites by Irving Berlin, Cole Porter, Duke Ellington and more made famous by the First Lady of Song. With Gordon Johnson on bass and Dave Karr on saxophone. 4 and 7 p.m. FMI and tickets ($30).