Of all the summer art fairs in the cities – and there are plenty, starting with Edina on the first weekend of June – the Powderhorn Art Fair is the most laid-back. Circling the lake in Powderhorn Park, 66 acres in the heart of the city (big enough that it used to have its own Fourth of July fireworks), it’s a market, for sure, but it’s also a walk in the park, for real.

Multicultural and family-friendly, Powderhorn is an art fair where grown-ups stop to chat, kids run around, and you feel like you’re in a neighborhood. You’re less likely to be flattened by a triple-wide stroller or crushed by crowds. There are fewer high-end, big-ticket items, more small things, some being made before your eyes. Proceeds fund park programs, including theater arts, a computer lab, a teen center, a pottery studio and team sports.

Marking its 25th year this weekend, Powderhorn will host 184 local and national artists, working in everything from clay to wood. Entertainment will include live performances, kids’ activities and acoustic music from around the world: Irish Uilleann pipes, French hurdy-gurdy, Iranian and Kurdish music. Open Eye Figure Theatre will put on puppet shows; Powderhorn Empty Bowls, which works to help end hunger, will hold pottery demonstrations; StevenBe will give spinning and weaving demonstrations.

Powderhorn is an art fair where it’s easy to take a break – to veer off the path, find a bench or a patch of grass and enjoy the view. Hours are Saturday, 10 a.m.-6 p.m., Sunday 10-5. Download a Metro Transit ArtPass for free rides to and from Powderhorn and between Powderhorn and Uptown, where the bigger, glammer Uptown Art Fair is also happening this weekend.

You know, of course, that we’ll never be over Prince, that we’ll always have Prince concerts, celebrations, and tributes, that Paisley Park may one day be our Graceland. The Twin Cities Film Fest is inviting everyone who has a unique Prince story and/or had a Prince encounter to make a short video (2-3 minutes) to screen as part of a Prince tribute at the festival in October. Do your thing, then upload it here.

Bring your words to St. Paul’s rails and bus lines. With support from the Knight Foundation, the Saint Paul Almanac and Metro Transit are holding an Impressions Poetry Contest. Poems will be combined with art by local artists and made into 24 posters for St. Paul transit. Almanac Executive Director Kimberly Nightingale put a poetic twist on the project: “Impressions will weave through the streets as a kind of moving book, linking us to each other.”

The rules: 12 lines, 50 characters per line. (This can’t be “Leaves of Grass.” It has to fit on a poster, with room for art.) Your poem should reflect the lives of Twin Cities’ residents. Deadline: midnight Aug. 16. Create an account on the Almanac’s website and go.

Friday at Jazz Central Studios: Eric Kamau Gravatt and Source Code. Drummer Gravatt is an alumnus of Weather Report, arguably the all-time greatest jazz fusion band. For many years, he played with McCoy Tyner, who was the pianist in John Coltrane’s famous Quartet of the early 1960s. He’ll be at the cozy basement club in Northeast Minneapolis with Solomon Parham on trumpet, Lucia Sarmiento on saxophone, Dean Magraw on guitar and Ron Evaniuk on bass. 8 p.m. $10 at the door, $5 with valid student ID. 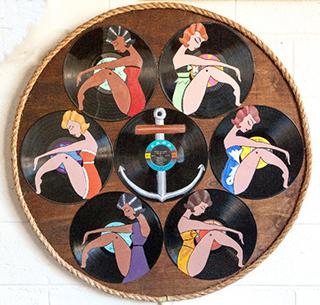 Opens Saturday at Studio Payne: “Records Reclaimed.” We’ve seen old LPS and 45s used as clocks, coasters, cake plates and picture frames. Seeing them used to make new art is kind of refreshing. A group exhibition at Studio Payne features work by nearly two dozen artists who are using vinyl as canvas, molding and sculpture with various mediums, including oil and spray paint. The show takes itself a bit too seriously –most of us know by now that reusing, recycling, and reclaiming are good, overflowing landfills are bad – but it should be fun to see the results. Created and run by artists, located at 1129 Payne Ave. in St. Paul, Studio Payne is a combination gallery and oddities shop. Opening reception 6 p.m.-midnight. FMI. Closes Aug. 31. 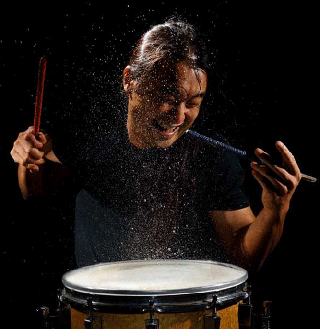 Courtesy of the artist
Tasuye Nakatani

Sunday at Studio Z: Tatsuya Nakatani. We first saw Nakatani at the Clown Lounge eight years ago. Originally from Osaka, Japan, he’s a creative artist/percussionist whose instruments include drums, gongs, cymbals, singing bowls, metal objects, bells, sticks, bows and others of his own invention. His music is less about melody (a lot less), more about an utterly unique, hypnotic and surprising sound environment, largely improvised and experimental. Touring constantly, he’s made more than 60 recordings and collaborated with hundreds of artists, including area bassists Adam Linz and Chris Bates, who will join him for a program of solo and trio sets. 7 p.m. FMI. $10-20 sliding scale at the door.

Monday at Du Nord Craft Spirits: Trylon Movie Trivia Night. Got movie smarts? Or do you just like hanging out with other people who love movies? Trying something new, Trylon is launching a second-Monday-of-the-month Movie Trivia Night, with prizes. Show up and check it out; it’s free. 8 p.m. in the Cocktail Room.

Monday, on Dominick Argento Day, at the Ted Mann: OpenSource: A Dominick Argento Celebration. The opening event of the Source Song Festival features Argento’s “Letters from Composers,” “Three Meditations” and “A Few Words About Chekhov,” framed by interviews hosted by MPR’s Brian Newhouse with Argento and the artists who originally premiered these works including Håkan Hagegård, Martin Katz, and Maria Jette. 8 p.m. FMI and tickets ($25/$20 seniors/$15 students). So you know, the Fringe is going on at the same time at the nearby Barber Center for Dance and Rarig Center.