In May, the St. Paul Chamber Orchestra announced that kids ages 6-17 can attend concerts for free starting in the 2016-17 season. Anyone under 17 must be accompanied by an adult, but still, it’s a good deal, and two good things should come of it: encouraging parents to bring their kids (up to four get in free with each paying adult) and nurturing future SPCO and classical music audience members.

Today the orchestra opened the doors even wider to young people. Also effective with the coming season, students with valid ID may attend unlimited SPCO concerts for free. The target audience is college students, but if you’re 75 and getting your degree, go for it.

Sweetening the pot, the orchestra has added a new concert series at Icehouse, a second Happy Hour Concert at the Ordway, Young Audience Guest Passes for subscribers, and more post-concert after parties for 20- and 30-somethings who belong to the SPCO’s club2030. Plus students can order their tickets starting today (Tuesday, Aug. 9), a week before they go on sale to the general public.

All of the above are part of what the SPCO is calling its New Generation Initiative. Unveiled earlier today, adding to an already lengthy list of unconventional strategies aimed at growing audiences (which includes offering $5 monthly memberships and performing in neighborhood venues around the Twin Cities), they make attending concerts so easy it’s silly not to go, whatever your age.

The New Generation Initiative is being funded by major gifts from a small group of individual donors. As the SPCO has lowered ticket prices and increased its geographic accessibility, audiences have grown by 44 percent and donors have stepped up. The SPCO’s ticket prices are now the most affordable of any major orchestra; more than 50 percent of seats in the 2015-16 season went for $12 or less. While the $42-million Ordway Concert Hall is the orchestra’s official St. Paul home, over half of its concerts take place in churches and temples, school and college concert halls, theaters (and now bars) in Twin Cities neighborhoods and suburbs.

“We at the SPCO feel so passionately that ours is a living, breathing art form that can have a real emotional impact on anyone and everyone who experiences it,” SPCO Artistic Director and principal violin Kyu-Young Kim said in a statement. “We want to dispel the stereotype that classical music is elitist and stuffy.” For their concerts at Icehouse, the musicians will probably show up in jeans, as they did in March when a quintet played Schubert there. It’s definitely more relaxed and casual than a concert at the Ordway, also shorter. Of course, there’s the hope that once young people hear a concert at Icehouse, they might be more willing to try one at another venue or the Ordway Concert Hall.

This season’s Icehouse shows include performances of Wynton Marsalis’ “At the Octoroon Balls” on Nov. 9; Mendelssohn’s String Quintet No. 1 and Nielsen’s Wind Quintet on Feb. 23, 2017; and Dvorák’s “American” Quartet on April 26.

Like the first Happy Hour concert, which took place April 1 this year, the next one, set for May 11, 2017, will feature violinist and SPCO artistic partner Pekka Kuusisto and a preconcert social hour with drink specials and food trucks. The concert itself will last about an hour.

For the even younger set, the popular Target Free Family Music Series continues. Tickets to those concerts are free for both adults and children.

It’s official: Hennepin Theatre Trust will buy the former Solera building in downtown Minneapolis. Located at the corner of 9th and Hennepin, right next door to the Trust’s Orpheum Theatre, it will house the Trust’s employees and, per the press release, “help the Trust advance its mission to create positive change through the arts in WeDo – the West Downtown MPLS Cultural District.” Which could mean many things.

The Trust also operates the State, the Pantages, and the New Century Theatre in City Center. 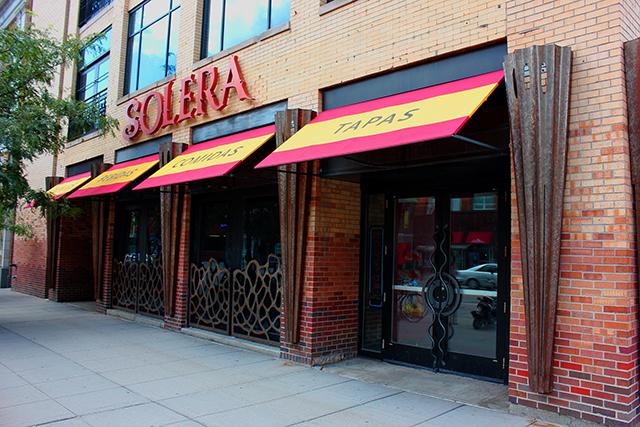 The Solera is a big building, three stories high, 28,000 square feet, with three kitchens and a restaurant patio. For 11 years, it was home to the Solera tapas restaurant. It also hosted special events. During the total renovation of the Northrop, the U of M’s dance series moved to the Orpheum and preshow discussions were held upstairs in the Solera building. Solera closed suddenly in January 2015 and the building has been vacant ever since.

Last Friday, the Minneapolis City Council voted unanimously to approve the interim financing for the project, with a total budget of $3.3 million. The terms include a $2.8-million, eight-year loan. The remaining $0.5 million will be split between a $250,000 grant to help finance the acquisition and renovation and a $250,000 cash payment from the Trust, which will fundraise to repay the City’s loan.

Fundraising, design and planning will begin in September, with a hoped-for move-in set for mid-2017.

“One of the many strengths of our organization is our ability to recognize opportunities when they arise,” Hennepin Theatre Trust CEO and president Tom Hoch said in a statement. “When the Solera building became available, we acted quickly to acquire it.”

Since the building had been a restaurant for so long, most people expected another restaurant to move in. The Minneapolis/St. Paul Business Journal reported in August 2015 that Solera building was under contract to a group of restaurateurs and the sale was likely to close in November.

Solera’s owner is Lee Lynch, a retired advertising executive who was also one of the initial funders of MinnPost and is chair emeritus of the MinnPost board.

Wear purple to the Fair on August 26

For many people, Friday, Aug. 26, just became THE day to go to the Minnesota State Fair.

From 5 p.m. to close, it will be all about Prince. “Unite in Purple: Honoring Prince at The Great Minnesota Get-Together” will feature Prince music, tributes, and cover songs at stages throughout the grounds; a Prince Party at Carousel Park led by DJ Dudley D, Prince’s personal DJ; lavender lighting on fair buildings and carnival rides; a one-night-only laser show with a Prince finale; and tribute fireworks set entirely to Prince music, sponsored by Mazda. (We’ve heard that purple fireworks are among the priciest.)

Imagine thousands of people in purple lining up to get in, coming through the gates, and spreading throughout the ground. Great idea, State Fair. Can’t wait to see those attendance figures.

Daily through Aug. 14: Minnesota Fringe Festival. Audience members are posting tons of reviews. Reviewers are fanning out from the Star Tribune, the Pioneer Press, City Pages, Minnesota Playlist, Twin Cities Arts Reader, Cherry and Spoon and more. We would if we could. Meanwhile, you can read everyone else. 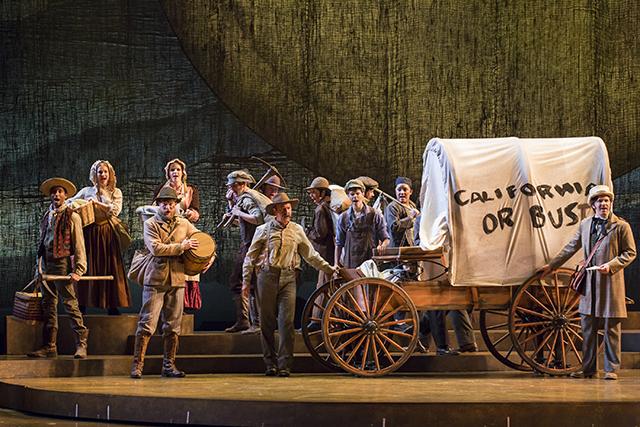 Photo by Tracy Martin
The Company of Lerner & Loewe’s Paint Your Wagon at The 5th Avenue Theatre in Seattle.

Opens tonight (Tuesday, Aug. 9) at the Ordway: “Paint Your Wagon.” Lerner & Loewe wrote some great songs for this classic American musical set during the California Gold Rush, including “They Call the Wind Maria” and “I Was Born Under a Wand’rin Star.” The Ordway’s “revisal,” which premiered at Seattle’s 5th Avenue Theatre, uses an all-new book by Pulitzer Prize finalist Jon Marans with narratives from the era that were left out of the original, making the story more diverse and inclusive. For the two Wednesday performances (Aug. 10 and 17), theater artist Sha Cage and author Kao Kalia Vang will take part in a preshow discussion facilitated by Gordon Nakagawa, the Ordway’s communication and diversity consultant. David Armstrong directs a cast that includes Tony nominee Robert Cuccioli, Ann Michels and Dieter Bierbrauer. FMI and tickets ($37-$111). Closes Aug. 21.

Wednesday at Crooners: Three Jazzy Women Singers/Songwriters. Lucia Newell, Judi Vinar and Vicky Mountain team up for an evening of all original songs, with Phil Aaron on piano and Graydon Peterson on bass. Lucia promises “a rare evening of lots of original variety in voices and interpretation as well as fun new songs to perk up your ears and spirits.” In the club’s Dunsmore Room, made and meant for listening. FMI and tickets ($12, $40 dinner show).

Thursday at Magers & Quinn: A reading with Charles Baxter, Karen Babine and Rachel Coyne. Three 2016 Minnesota Book Award finalists and winners read from their latest, “There’s Something I Want You to Do” (Baxter), “Water and What We Know” (Babine), and “The Patron Saint of Lost Comfort Lake” (Coyne). 7 p.m. FMI. Free.

Thursday at the Bakken: “Birds & Bees.” A 21+ museum party with a little something for everyone: a look at the Bakken’s on-site beehives with The Beez Kneez, a chance to get close to raptors and a bald eagle (but not too close) with the U’s Raptor Center, lessons in keeping our water clean from the Minnehaha Creek Watershed District, live music by Jesse Simon and the MN HardBOP Collective, and a glimpse into the Bakken’s own technologies of sexuality collection. (We’re curious about that one, too.) Plus Native American food from the Tatanka Truck and French macarons from Cherry on Top Confections. $10 at the door. The Bakken’s rooftop and gardens are lovely places to spend a summer evening. 5:30-9 p.m. $10 at the door, free if you’re a member.