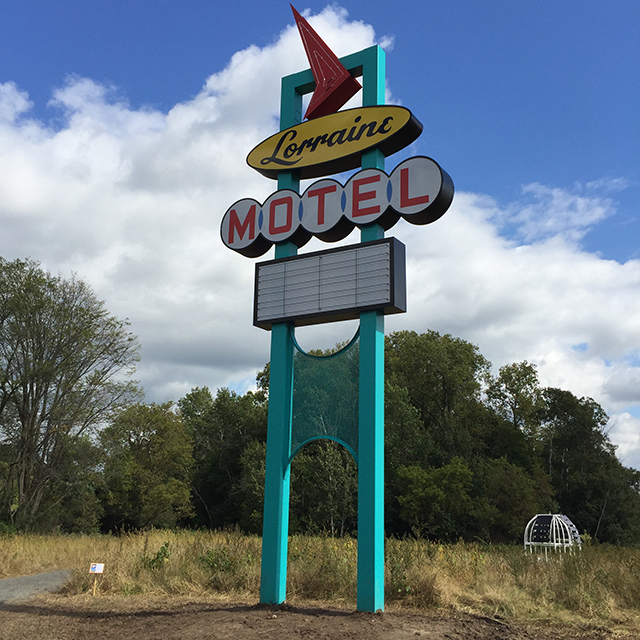 Franconia Sculpture Park in Shafer, Minnesota, is full of oversized surprises, the latest being the life-sized replica of the Lorraine Motel sign that rose last weekend in a far corner of the sprawling 25-acre site in the St. Croix River Valley. It’s easily visible from Highway 8. If you drive by, you’ll see it.

The Lorraine Motel in Memphis is where the Rev. Martin Luther King Jr. was assassinated on April 4, 1968, when he stepped onto the balcony of room 306. Today it’s the home of the National Civil Rights Museum.

“Lorraine Motel Sign Resited 2016” is the work of Minnesota-based artist Chris Larson, whose multimedia practice is rooted in large-scale sculpture. Larson made “Unnamed Structure,” the raw-edged, elevated covered bridge that stood in the Walker’s Cargill Lounge in 2011. And “Celebration/Love/Loss,” the replica Marcel Breuer house he set on fire in downtown St. Paul during Northern Spark 2013. (There’s another replica Breuer house being built in Kenya, to be used as a clinic. Larson is friends with a tribal elder; they met when both were attending Bethel College.)

Larson made “Deep North,” a shotgun shack covered in ice, inside and out, captured on film and video. And the skewed, disorienting sets for “Wise Blood,” the opera based on the Flannery O’Connor novel and presented at the Soap Factory in 2015. Larson’s “Land Speed Record,” a sculpture and film installation inspired by the history and architecture of the 7th St. Entry club and the Hüsker Dü album by the same name, is currently on view at the Walker.

Even if you know his work, you might not look at “Lorraine Motel Sign Resited 2016” and think, “That’s a Chris Larson.” It’s so shiny, new and perfect. It hasn’t been smashed, frozen, shot at or burned. And it raises a thousand questions. What is it doing in a field in Minnesota? Where’s the motel? Wait – the Lorraine Motel? In Memphis? The scene of a senseless, cataclysmic act of violence that changed America? It’s a sign; it’s a sculpture; it’s a statement and a lightning bolt.

We spoke with Larson by phone earlier this week.

MinnPost: What is the story behind this project?

Chris Larson: For the past couple years, I’ve been relocating and resiting different architectural sculptures. One was the Marcel Breuer home, which I rebuilt, then relocated to downtown St. Paul and then burned it down. Another is the Katonah Relocation Project at the Katonah Museum of Art in New York. [Note: This is a full-scale replica of the home of architect Edward Larrabee Barnes, who designed the Walker Art Center.]

I have had a long fascination with the South. I’ve been interested in the exchange of North and South for quite some time. [See the “Deep North” project and the “Wise Blood” sets.] About two years ago, I went down to Memphis and Graceland. Elvis has been a fascination of mine, and Sun Records. I love a lot of the artists that came out of Sun Records. I visited the Civil Rights Museum and have been thinking about that sign for these last couple years. When [Franconia director] John Hock asked artists who have shown at the park for the past 20 years to send in proposals, I immediately thought about relocating and resiting the Lorraine Motel sign.

It seemed perfect on the side of the highway, where motels are. It has a retro feel to it, and I guess the hope was that when people drive by, if they don’t know the area, they might think either a motel is moving in or has closed down. Maybe they’ll do a Google search for “Lorraine Motel” and “civil rights” or the “Civil Rights Museum” might pop up. I think the sign transports that place to the North.

MP: How did you make it?

CL: I worked with a guy named Ben Janssens who runs a sign company called SignMinds out of Minneapolis. Ben is an artist and understands how artists think and work. This is the first project I’ve ever done where I didn’t touch one thing. I love building, I love moving that way and working my studio that way, but I knew I didn’t have the skills to do that kind of work, and it was important that it was a replica.

Ben did a lot of research. I think [the sign] is pretty close to the original size and the colors. Definitely the fonts. 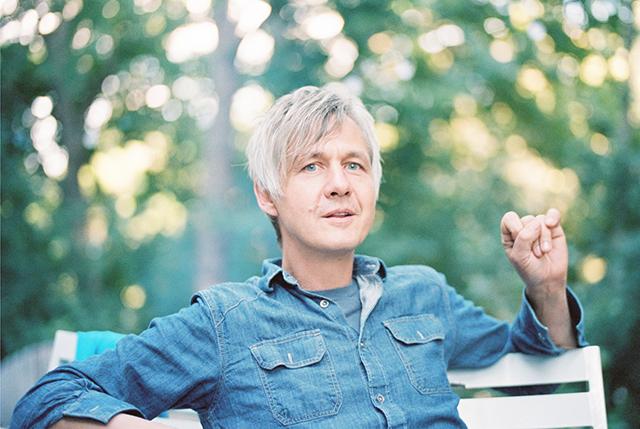 Courtesy of the artist
Chris Larson

MP: I never would have recognized this as your work, based on what I’ve seen before.

CL: That’s great. I know I grew through this. You’re always looking for that door that goes left, and I think I found that with this project.

MP: I had the feeling that some people who walked past the sign at Franconia last weekend didn’t know what it was. There’s not much information on the label. The dimensions and materials, a small photo of an aerial view of the Memphis location, and this artist’s statement: “I am interested in the things that are inherent in all life. Good and evil, sin and redemption, love and hate. As well as the reality of dashed hopes, thwarted dreams, and unfulfilled expectations.”

CL: That statement was a quick decision. It probably comes from 2000 or 2002. I’m writing a [new] statement about the sign, because I think it’s important for people to know what it is specifically referencing. So that will be changed out. I’m finding that this is a complex piece and it’s raising some issues already.

CL: What would you think? I’m just curious.

MP: One of the things I wondered was, how is a white artist taking on a project with so much meaning to the civil rights movement? Do you have any concerns that this is not your sign to re-create or your story to tell?

I was reading in the paper this morning about the man in Lonsdale with the “Muslims Get Out” sign in front of his restaurant. Those kinds of signs end conversations. I’m hoping that this one starts conversations, or continues a conversation that’s deeply ingrained in our country.

MP: Is that one of the issues you’ll address in your new statement for the Lorraine Motel sign?

CL: It is. I don’t want to come across as defensive. I’m not. But I think it is important for artists to be asking these kinds of questions.

MP: What kinds of responses are you expecting from the sign? Do you think they’ll be supportive or not supportive? Or does it not matter?

CL: It didn’t give me pause for the project. I’m not naïve. I’m not going into this blindly. I understand what art does, and that’s why I do art. I understand what happens when you put things in the world. That’s part of the reason I got involved – to create conversation, not end it.

MP: Does this signal a new direction for you, or point to other projects?

CL: I think it just opens a new door, a new language to speak in.

Franconia Sculpture Park is free and open to the public, dawn to dusk, 365 days a year. Chris Larson’s “Lorraine Motel Sign Resited 2016” is located in the northwest corner. Sculptures at Franconia come and go, but Larson’s piece is “permanent as far as I know.” His “Land Speed Record” is on view at the Walker through Jan. 8, 2017. If you go, look for the replica of the 7th St. Entry drink rail that faces the video, another example of Larson’s continuing interest in “replicating, relocating, resiting.” On Thursday, Sept. 29, at 7 p.m., there’s a free event associated with the exhibition that includes a live performance by Yousif Del Valle and an LP release.