Since 2011, Bell has been music director of the Academy of St. Martin in the Fields, succeeding its founder, Sir Neville Marriner. He recently joined Turnaround Arts, which gives kids in struggling schools access to arts education. He’s made a couple of cameos on Amazon’s classical music-themed streaming series “Mozart in the Jungle.”

Bell’s latest album of many, “For the Love of Brahms,” recorded with the Academy, cellist Steven Isserlis and pianist Jeremy Denk, is due out Sept. 30. He has three children. Even his violin – the nearly-$4 million Gibson ex-Huberman Stradivarius – has its own biography.

On Sept. 22 and 23, Bell will join Osmo Vänskä and the Minnesota Orchestra, fresh from their own triumphant European tour, for two season-opener concerts. In August, he gave a telephone press conference for several reporters in cities early on his tour itinerary. That way, he wouldn’t have to answer the same questions a zillion times and we could all share the highlights.

Press: You’ll play the Tchaikovsky Violin Concerto in Minneapolis. You’ve written that you have performed this piece maybe 1,000 times in concert.

Joshua Bell: That may be an exaggeration, but it’s got to be getting close.

P: What makes it personally satisfying after all this time? What makes you want to play it again and again?

JB: Until I get it right, I guess I’ll just keep playing it. You would think that once you’ve done it that many times it would get a little bit boring, but in a way it’s very freeing, because when you know a piece really well, that’s when you can let it go – let everything that you know go.

In a performance, the Tchaikovsky has very much room for spontaneity and improvisation. Not improvising notes, but the way you take time and the way you express. There are so many options of how to do that. Since I know it so well, I can immerse myself in the moment on stage and just feel free because I know I know the piece. I don’t have to think about what notes are coming next. It’s sort of like an actor who’s done eight shows a week and done the play hundreds of times.

There are still moments in the practice room where I think, “Oh my God, that’s a better way of doing this.” There are still those moments of excitement, like, “I’ve just improved the way I’ve been doing this piece for years.” Those things still happen.

P: How will you know when you’ve gotten it right?

JB: I was joking, because of course you never get it right. When I talk to kids. I’ll say, “What are you working on? Have you done the Mendelssohn concerto yet?” They go, “Oh, yeah, I finished that.” And I always laugh and joke about that. You never finish a piece. It’s an ongoing process that is never done. You can always find more inside these pieces.

The great geniuses in our business are those few per century, like Mendelssohn and Tchaikovsky and Mozart and Beethoven. These are the stars of the show, and when you’re working with these pieces you’re in the presence of great minds that come along a few times in a century. It’s very exciting to be around – even though they’re dead, you’re kind of in their presence. So it’s an ongoing process.

After saying that, there are times when you feel like you need to take a break from a piece, and even with the Tchaikovsky I’ve taken a year or two and not scheduled it, and then I’ll come back to it. And then when you come back to it it’s like falling in love again.

P: How has your interpretation changed over the years?

JB: I think as I get older and do more conducting, as I’ve become more experienced, I look at the overall piece and its architecture in different ways. It’s like you’re telling a 40-minute story, and how do you tell that story that makes sense from beginning to end? Everything is connected when you tell a story. How you tell the beginning affects the end. There should not be a note in a piece of music that doesn’t have a purpose, a direction, and a place in the story. It has to be coming from somewhere or going somewhere. 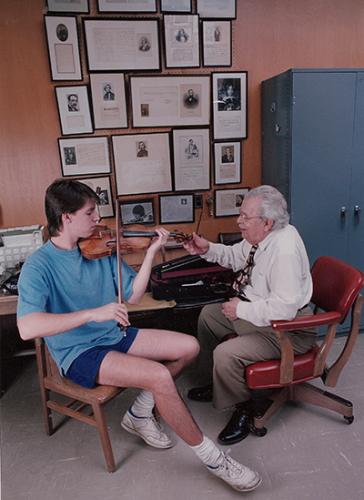 Courtesy of the artist
Bell with his teacher, Josef Gingold

P: You were a student of Josef Gingold when you first learned the Tchaikovsky at age 13. What is something in particular he taught you about it that has stayed with you?

I do remember him playing the second theme of the first movement. I can still remember his way of playing it so expressively. When he would slide, it would be almost like crying on the violin. That music is so heart-on-sleeve, but it’s got to be sincere. I have great memories of hearing him be completely committed to that theme, and it was never about showing off or trying to be over the top. There was something always kind of inward but very emotional in the way he would play, so hopefully that rubbed off a little bit on me.

P: You mentioned having a hard time with some new music. Are there any contemporary composers you feel are good at telling a story? People whose music you like playing?

JB: There are many. There are some composers that I’ve developed a relationship with that I like to foster. Two in particular are John Corigliano and Edgar Meyer.

Corigliano wrote the Red Violin concerto and the music for [the film] “The Red Violin.” I gravitated towards him because even though his music is new and innovative, he still has that old-fashioned sense of telling a story, of structure. If I feel that a composer is sort of throwing paint at a canvas, and whatever comes out … that sort of approach to music is thankfully not so popular anymore. I really feel composers going back to melody and telling a story is very important. I love Corigliano.

I’m now commissioning another piece from Edgar Meyer for me and the Academy. I think he’s one of the few composers who have a completely unique voice. It comes from the roots of classical and bluegrass, but it’s completely honest and unique. I think many composers struggle with trying to find a unique voice, and sometimes they use artificial techniques to be new and innovative. It’s the same in the visual art world – trying to find a gimmick. It’s nice to find a composer like Edgar who’s honest but unlike anybody else. That’s what I look for.

P: Can you address your work/life balance, and how you achieve that?

JB: There are so many parts to my life, and I have three kids. I feel like I am sometimes one of those circus people spinning plates – many at the same time, trying to keep them all going. I seem to like being like that. It’s very satisfying when you can keep all those plates going, and I feel very alive doing that, and when I do have time off I tend to want to move on and start doing something.

I don’t know if it’s in my character or what, but finding the right balance is difficult. I’m trying my best and still refining the way my life works. The kids are very important, so I’m trying to find more ways to spend time with them, bring them with me. All that stuff is a challenge because I love my family and I love my kids, but I also don’t want to give up my work. I love what I do, so trying to make all that work together is not easy.

P: What’s one thing you would like to do that’s outside performing, conducting and teaching?

JB: I have a lot of projects I’m just waiting for time to come around to doing. I have a restaurant idea. I’m into food a lot. I love food and I’ve got this interesting concept – I’m not going to reveal it yet, but I have a concept for a restaurant that involves music and food that I would like to find the right chef and right place to do it, maybe in New York City. But that would be a lot of energy. I haven’t had the time to follow through with this idea, but that’s something I’d like to do.

In music, I want to do more composing. That’s something I haven’t done enough of, but I write all my own cadenzas and do a lot of arrangements. It’s given me the bug to do more composing, but that takes time, and right now I’m doing about 150 concerts a year and just barely keeping up with what I’m doing. Time is the one thing there’s never enough of.

P: What about your Washington, D.C., subway station performance?

JB: I thought we were going to go a whole day without talking about that.

P: Why did that capture the imagination of the public?

JB: I don’t have a good answer. I really don’t know why it went on to become so viral. … People are always trying to find what is the magic. Why do we go to concerts? What does music even do? It’s a strange code of sounds. It’s supposed to move you, and it does move you under certain conditions. People are always trying to figure that out, even myself. I don’t understand fully how that works.

But certainly this points to the fact that you need certain things to be in place, and one of them is a captive audience atmosphere. The cynical people would say it’s because there was no hype. I don’t buy that. I think it has to do with the atmosphere of a performance and the shared experience that goes along with it, and I think the article referred to that.

[Bell is referring to the Washington Post article by Gene Weingarten that won the Pulitzer Prize.]

P: Do you have any plans for an encore performance in a subway station?

JB: No. I did one more time when I was releasing the Bach album. We decided to do a little performance in the Metro at the main train station in Washington, but this time with a twist. We kind of leaked it out that we were going to have this little concert, and something like 3,000 people showed up. It was a great experience. It still was a public space, but people were there to listen, and it was a completely different experience, and it was quite a lot of fun. But that closed the book on it for me.

This interview has been edited for brevity and clarity.