Some of the staff at the Minnesota Opera refer to Ryan Taylor as their “new quarterback.” Taylor, who became the opera company’s president and general director in May, has no problem talking about opera and sports – and movies – in the same breath.

“People think opera is one thing. But we have period dramas, we have classics, we have premieres, we have modern pieces, and we now have thrillers. There’s all kinds of things that we present in a season, and to say that you don’t like opera is sort of like saying you don’t like sports or you don’t like movies. You just have to find what you like, because there’s something that speaks to everybody.”

Taylor comes to Minnesota from the Arizona Opera, where he’s credited with beginning a dramatic turnaround of the organization’s finances, record-breaking success with fundraising (Taylor and members of the community and board once raised over $1 million in six weeks), improving the quality of the artistic product while reaching new audiences, and launching a new initiative that, among other things, commissioned American Indian composers to create micro-operas.

10 years performing as a baritone

Before then, he worked for an artist management company in New York, for Wolf Trap Opera Company, for the Berkshire Opera Company and Singers Beyond Borders. And before then, he spent 10 years as an operatic baritone, performing more than 30 roles. During the 2000-01 season, Taylor was a member of Minnesota Opera’s Resident Artist Program. He returned in 2004 to sing Sharpless in “Madama Butterfly.” 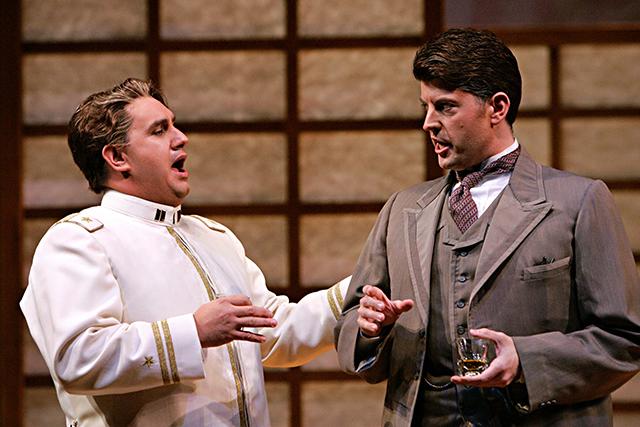 “That’s actually the best review I ever got in my [singing] career,” Taylor said. “I love that show. Colin Graham was directing. It was an extraordinary experience.” Born and raised in the South, Taylor developed a real affection for the opera company in the North. “For the next 10-12 years, I came back every year or two to see a specific performance, because they do things here you can’t see anywhere else. The Jonathan Dove ‘Pinocchio’ [2004] was one of my favorite nights in any theater anywhere in the world. I saw a lot of the premieres – ‘Silent Night,’ ‘Manchurian Candidate,’ ‘Doubt,’ most recently ‘The Shining.’ ”

Taylor got to know Kevin Smith, who was Minnesota Opera’s president and CEO from 1986 to 2010. (Smith now heads the Minnesota Orchestra.) “I met him when I was here on the resident program, but subsequently he became a friend and a mentor,” Taylor said. When he accepted the position as general director of the Arizona Opera, he brought Smith in as a consultant for a year. Through in-person visits and phone conversations, “he taught me how to be a general director. I had a skill set that lent itself to being able to do the job, but he helped me put all the pieces together.” Smith was one of Taylor’s references for the position in Minnesota. Taylor calls Smith “my Obi-Wan.”

Stability needed after churn at the top

A thumbs-up from Smith, long familiarity with the company, and several years’ experience on both sides of opera – as administrator and artist – make Taylor look like a good pick for a position that could use some stability. Smith was succeeded by Allan Naplan, who lasted a year in the job, then Kevin Ramach, who resigned after 2½ years. In November 2014, Nina Archabal, a former director of the Minnesota Historical Society, was brought in as interim director. By then, the company had posted its second straight deficit after nine years in the black. The internal staff had also experienced churn.

We asked Taylor how he plans to restore confidence in an organization that has seemed shaky from the outside.

“I don’t think a lot about restoring confidence,” he said. “I think a lot about the art, and I think a lot about the structure that provides the support for the art. I think you earn confidence. There are people who have been skeptical, and they have every right to be skeptical. If you have a company that’s running a deficit for a couple of years in a row, you might consider whether they’re on the right track, and how engaged you want to be as a patron and a supporter. Some people may choose in those situations to continue to attend, but maybe their support is held a little tighter. I think you earn that back.

“I don’t think there’s anything I could say today to convince someone who’s been skeptical that now’s the right time to jump back in and be involved with the opera. But I do think that if they continue to follow the progress of the organization, they’ll see some stability and they’ll see some artistic growth and some potentially exciting projects on the horizon, and they’ll continue to see – God willing – a healthy bottom line at the end of the year.”

Art needs reliable base of support

Taylor has, in his words, “a slightly different approach to budgeting than some of the folks before have had.” He explained, “You can quickly make a mistake to think that if you build the most inspiring, beautiful artistic project, someone will be inspired to fund it. That’s slightly flawed logic. You do have to produce incredible art, but you also have to have a basis of support that you know you can rely on. And you have to match the two and balance them.

“Sometimes the budget approach here was, ‘We’re going to do tremendous things and the community will support us, we hope.’ We’ve started working with staff and board to look at a couple different scenarios. If we were to produce the most dynamic, beautiful artistic season, what would that cost? And if we were to look at exactly what we know we can rely on for support, what’s that number? And where do we meet in the middle? Because we do need to stretch, but we don’t need to overspend. Anytime you work at a nonprofit there’s risk involved. We want to minimize the risk and maximize the effect of the art at the same time that we’re working on building loyalty again.”

The Minnesota Opera’s 2016-17 season, which starts this weekend with Gounod’s “Romeo & Juliet,” was already in place long before Taylor arrived. How will he put his mark on it?

“For me, the work we’re doing this season, in executing something that was planned before I arrived, is about environment,” he said. “I want our audience members to feel more appreciated. I want our artists to feel like they matter more and to feel like they’re in a creative, safe environment where they can do their best work. Because if they feel good about themselves and what they’re doing, they’re going to give a great show.

“I want to make sure that when we move through the season our staff is proud of our work, our board is happy with what we’re doing, the artists are in an environment where they are appreciated and creative, and our audiences can feel it. That’s really what I want, and I am very excited about the shows. We have a terrific season coming up – an inventive new presentation of ‘Romeo,’ and a world premiere of ‘Dinner at Eight,’ and the one I think is the sleeper I’m really interested in, [Vicente Martin y Soler’s] ‘Diana’s Garden.’ ”

What Taylor calls “contextual events” will enhance the season and generate buzz.

“We’re going to play the film ‘Dinner at Eight’ at a local movie theater so people can see the 1939 film before they see the opera. While they are very similar in some ways, they are also very different. We’re also looking at some events around ‘Das Rheingold,’ the opening of [Wagner’s] Ring cycle. Some events with the Wagner Society, and some events of our own that will give people an idea that they might be able to jump in even if they find Wagner intimidating.” The company might send its artists out into the public more, if time allows.

“Even through all the turmoil,” Taylor said, “I don’t think the artistic product has suffered here. One of the things we can be proud of is that no matter what was happening behind the scenes or with the bank account, the art on the stage remained at a certain quality.” For that, he credits Dale Johnson, the opera’s artistic director since 1984.

For now, Taylor has a five-year contract, and he’s already hoping that will be extended. “I never felt like I was interviewing for this job,” he said. “After living in nine cities around the U.S., there were three markets about which I thought, ‘If I get the chance to go back there, I will,’ and the Twin Cities was at the top of that list. So when I got the call, I knew this was something I wanted to investigate. Within 30 minutes of that first interview, I really wanted the job. I felt like we were each other’s people.”

“Romeo & Juliet” will open Saturday night, Sept. 24, at the Ordway and continues through Sunday, Oct. 2, with five performances in all. Tenor Joshua Dennis makes his Minnesota Opera debut as Romeo. Soprano Angela Mortellaro, a former resident artist whose previous appearances with the Minnesota Opera include “Silent Night,” “Cosi fan tutte,” “The Dream of Valentino,” “Hansel and Gretel,” and “The Manchurian Candidate,” returns as Juliet. Michael Christie conducts. FMI and tickets ($25-200).