A crowd turned up Tuesday night for the grand opening of Milkweed Books, the newest and perhaps indiest of the Twin Cities’ indie bookstores. So many people came (nonprofit publisher Milkweed Editions, whose place it is, estimates 400) that they couldn’t all fit into the actual bookstore, a 750-square-foot space on the ground floor of Open Book on S. Washington Ave. in Minneapolis.

Authors Judy Borger, Marlon James, and Cathy Madison were there, and Deni Ellis Béchard, whose fifth book with Milkweed Editions came out this month. So were Lisa von Drasek from the University of Minnesota’s esteemed Kerlan Collection, the children’s literature archives, and architect Christopher Dean, who designed the space. Books filled the shelves – most from other independent nonprofit publishers, some from the trades, like Colson Whitehead’s “The Underground Railroad” and Louise Erdrich’s “LaRose.”

It’s such a small space that you’d expect it to be crammed with shelves and racks and carts, and maybe a maze of aisles, but it’s not. The front wall is all windows. (A couple of display cases haven’t yet arrived.) Shelves line the side walls. The back wall is a gallery interrupted by a reading nook. It’s attractive, light and airy and adjacent to Open Book’s roomy café.

In his welcoming remarks, Milkweed Publisher and CEO Daniel Slager announced “the opening of a new chapter for us at Milkweed” (OK, groan) and caught us up on some history. In the late 1990s, Milkweed, the Loft Literary Center and the Minnesota Center for Book Arts joined forces to create Open Book. They raised $7 million to buy and renovate three stand-alone buildings in what was then not much of a neighborhood – a lot of parking lots, a liquor store, empty sidewalks. Open Book opened in 2000 and instantly became the nation’s largest literary and book arts center. Today, “aided undoubtedly in some level by Open Book’s presence,” downtown east is Minneapolis’ fastest-growing neighborhood. And Open Book is a destination. “Last year, 175,000 people walked through the doors,” Slager said.

He explained that “because we’re an independent bookseller opening a community-focused bookstore, we are doing some things a little differently than your average independent bookstore.” Examples? “Our answer to Amazon’s drones is bicycle delivery service in the neighborhood.” Also: a subscription service, with books chosen by store manager Hans Weyandt, the former co-owner of Micawber’s Books in St. Paul. Memberships with benefits. A book club/event series, scheduled for launch in the first quarter of 2017. 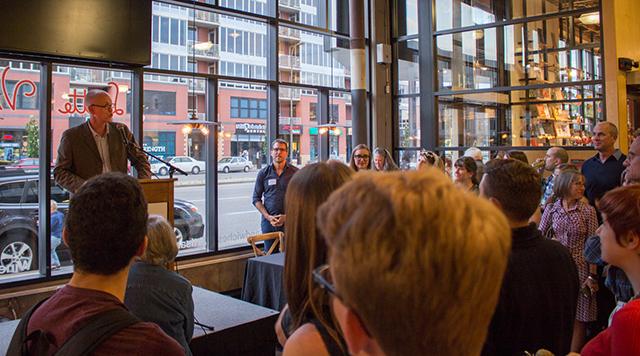 MinnPost photo by John Whiting
In his welcoming remarks, Milkweed Publisher and CEO Daniel Slager announced “the opening of a new chapter for us at Milkweed.”

This isn’t the first bookstore at Open Book. David Unowsky’s Ruminator Books was there in the very early days, but because the area wasn’t yet developed, there wasn’t enough foot traffic or local support. If this bookstore fails – in this neighborhood, in this location, at this time, with this focus and these people in charge – it’s the end of civilization as we know it.

Milkweed Books is now open for business, seven days a week. 10 a.m. – 7 p.m. Monday-Saturday, 11 a.m. to 3 p.m. Sunday. It doesn’t have its own website but will have its own tab on the new Milkweed Editions website, launching soon.

It looks like a giant cartoon talk bubble. Since 2011, starting in Galway, Ireland, the Truth Booth has traveled to Afghanistan, South African, and now the U.S., where it’s currently on a multi-city national tour, stopping in Minneapolis on Sunday and Monday. Created by The Cause Collective, a team of artists, designers and ethnographers (Ryan Alexiev, Jim Ricks, Will Sylvester and Hank Willis), it’s inspiring people to say amazingly candid, profoundly touching and thought-provoking things.

Step inside and complete the sentence “The truth is … .” You’ll be videotaped, but you won’t be asked to state your name or where you’re from. The videos will eventually be uploaded to a dedicated digital platform. You can view a selection on YouTube now. Starting in November, Cranbrook Art Museum in Michigan will host an exhibition of Truth Booth videos recorded during its two-week tour of Detroit, Flint and surrounding areas. 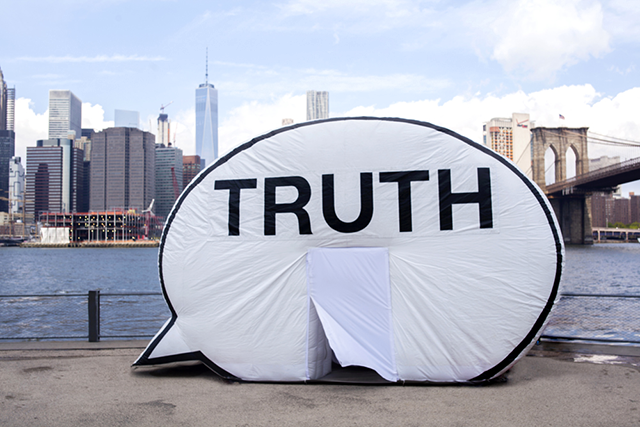 Photo by Ben Pettey
Step inside and complete the sentence “The truth is … .”

The idea behind the Truth Booth is to “empower hundreds of Americans to speak freely without fear of judgment or persecution.” Artist Will Sylvester said, “What people choose to speak about are issues dealing with their own lives: finance, love, family. While responses change from city to city, right now, people are very much about protection and wanting to keep their loved ones and families safe.”

On Sunday, the Truth Booth will be at Mill Ruins Park, and on Monday at Juxtaposition Arts. Hours both days: 11 a.m. – 5 p.m. FMI. Free.

Friday at Jazz Central Studios: Pete Whitman. An exceptional saxophonist, Whitman played jazz in Kansas City and Dallas before hitting the road with the Glenn Miller Orchestra and finally settling in St. Paul. He has performed here with nearly everyone from the Hornheads to the Minnesota Orchestra and visiting artists including Michael Feinstein, Rosemary Clooney and the Woody Herman Orchestra. Catch him in the intimate basement club in Northeast. 8 p.m. $10 at the door, $5 with student ID.

Friday and Saturday at the Walker: Alessandro Sciarroni: “UNTITLED_I will be there when you die.” The Walker’s Performing Arts season gets off to a high-flying start with Italian dance/performing artist Sciarroni and a group of master jugglers. This Midwest debut is not a circus but a meditation on the passing of time and a metaphor for the human condition, and how fragile we are. 8 p.m. in the McGuire Theater. FMI and tickets ($25). 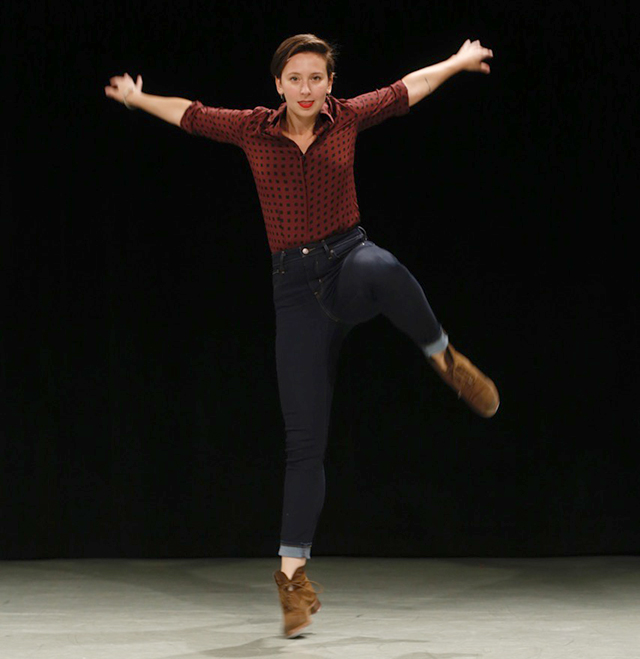 Courtesy of the Cowles Center
The Cowles opens its 2016-17 season with six McKnight fellows performing the world premieres of dances created especially for them.

Friday and Saturday at the Cowles: McKnight Dance Fellows Solo. The Cowles opens its 2016-17 season with six McKnight fellows performing the world premieres of dances created especially for them by choreographers of their choice. Dance doesn’t get more personal than this, or more couture. The dancers/choreographers are Kenna-Camara Cottman/Deja Stowers, Brian J. Evans/Tamara Ober, Kaleena Miller/Derick Grant, Alanna Morris-Van Tassel/Idan Sharabi, Sally Rousse/Arthur Pita, and Max Wirsing/Lauren Simpson. Pre-show discussion on Friday at 7 p.m., post-show discussion on Saturday. Performances at 8. FMI and tickets ($25).