Sad but not totally unexpected news: Bedlam Lowertown will close on Nov. 2. That’s a little over a week from today. Between now and then, the place will party like it’s 1999, with events that include a blues jam tonight, funk tomorrow, an album release, Salsabrosa’s Halloween costume party, four Taiko Lab shows and its own Halloween Party & Costume Contest. On its last night, Nov. 1, Bedlam will host a community Dia de los Muertos party with art, live music, poetry, dancing and food. The U of M’s College of Biological Sciences second Petri Dish event, originally scheduled for Nov. 2, will move to the series’ new home at Camp Bar.

Bedlam opened in May 2014 in booming Lowertown and has struggled with finances ever since. The opening was delayed a year because of construction and code issues, and the project overran its anticipated cost by $600,000. It nearly closed on its first anniversary. Artistic Director Maren Ward and Board President Dan Spock said in a statement, “Though serious efforts were in the works, the clock has run out on some significant debts and we must close. … We don’t see this as a failure though we recognize the impact such a venture has had – the ups and the downs and the unpaid bills. The Bedlam Board will continue to trouble shoot the debt.”

Bedlam’s first home was on Minneapolis’ West Bank, where it spent several years. In 2010, it was asked to vacate its building to make room for a mosque. Courted by St. Paul, aided with significant grant money, it moved to Lowertown, where, according to the statement, it served “over 50k audience members and presented nearly 1,000 unique music, theater and community events.”

The 2016 SAGE Awards for Dance, announced last Tuesday night at the Cowles, will be the last. After 12 years, the SAGE Awards “will gracefully exit, effective immediately,” according to a statement issued Thursday afternoon. According to coordinators Dana Kassel and Stuart Pimsler, “Our funders from the very beginning were quite clear that award programs were not part of their missions. Our primary funder, the McKnight Foundation, has been incredibly supportive from its inception and decided that they would not continue to financially support the SAGE Awards. … Our decision to exit is intentional and not the result of any financial deficits.”

Kassel and Pimsler met in advance with funders and the family of Sage Cowles, for whom the awards were named. “The program name and logo will be respectfully retired with our thanks,” Pimsler said.

Penumbra’s superb production of August Wilson’s “Jitney” was set to end Sunday, Nov. 6. Due to high demand, the run has been extended through Sunday, Nov. 13, with seven more performances added. The show on Nov. 10 will be followed by a post-play discussion. 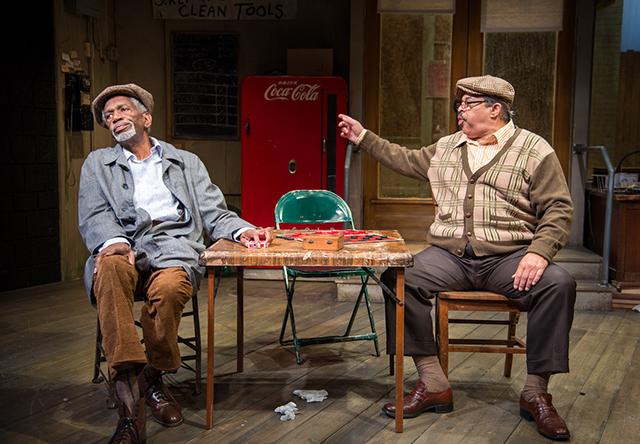 We hate to repeat ourselves, but here’s part of what we said about “Jitney” earlier: “It’s so good – and it feels so right – to see an August Wilson play at the Penumbra, a theater Wilson called home for more than a decade. … From the cast to the costumes, lighting and set, sound design, rhythm and flow, this is a pitch-perfect production, and a must-see.” Penumbra knows August Wilson. The cast knows August Wilson. There’s no better place on the planet to see this. FMI, performance times and tickets ($15-40).

Skylark Opera Theatre will return in February 2017 with an imaginative new season in surprising venues. Earlier this year, in March, Skylark abruptly canceled its 2016 season, which was scheduled for June. In April, it appointed Robert Neu its interim artistic director. Neu, who had directed eight Skylark productions, replaced Steven Stucki, who served as Skylark’s AD for 27 years before retiring. Neu’s position is no longer interim; he’s now officially AD.

In February, Skylark will present “The Tragedy of Carmen” at the Midpointe Event Center in St. Paul. This reimagined adaptation by Peter Brook of Bizet’s “Carmen” uses just six singer/actors to tell the story of the cigarette girl and her lovers. It’s a show for both theatergoers and opera lovers.

June brings Mozart’s “Don Giovanni” to the Woman’s Club of Minneapolis for a site-specific, immersive rendering set during Prohibition in 1932. This will be a collaboration with Neu’s Angels & Demons Entertainment company, which produced Mozart’s “The Marriage of Figaro” at the James J. Hill House in July. Like “Figaro,” “Giovanni” will move from room to room. We saw the final dress rehearsal of “Figaro” and were totally enchanted. So we’re primed for more.

Tonight (Tuesday, Oct. 25) at the Minneapolis Photo Center: Brian Peterson Artist Talk: Covering the Olympics. The longtime Star Tribune photographer and nine-time Minnesota Press Photographer of the Year talks about his experiences shooting the Olympic Games in Rio. $10 at the door or register here.

Now at the History Theatre: “Teen Idol: The Bobby Vee Story.” We were writing this column when we learned that pop music legend Bobby Vee died early Monday morning in Rogers, Minnesota. Vee was 73 and in hospice care with Alzheimer’s disease. Tyler Michaels, currently starring as Vee in the History Theatre’s popular and well-reviewed show, wrote on Facebook: “While I never met him, I am happy to say that I know him … Through his music, his wonderful family, his kindness, his generosity, and through the hundreds of stories I have heard from those who have shared in his life and have been changed by his creativity and spirit. … To portray him in this show has been the gift of a lifetime.” Unless something changes, this is the final week of performances. FMI and tickets ($15-$52). Ends Oct. 30. Michaels posted a link to Vee’s song “Beautiful People.” The song we thought of first: “Take Good Care of My Baby.”

Now at the Mall of America: “Prince: The Artist, The Icon, The Legend.” A free exhibit of artifacts and wardrobe from the Paisley Park collection includes the custom outfit Prince wore at the 2004 Rock & Roll Hall of Fame ceremony and the blue suit he wore in the “Raspberry Beret” video. We haven’t yet seen it, but the Current has, and here’s their report. On Level Three East. Ends Nov. 14.

Now at the St. Anthony Main Theatre: “A Stray.” There are many reasons to see writer/director Musa Syeed’s film. First, for non-Somalis living in the Twin Cities, it’s an education, or the start of one, about people trying to make it in a new and not very welcoming environment far from home. If you mainly see Somalis as men who drive taxis and women who wear head scarves, this film is like a light turning on in a room. Second, it’s beautiful to watch. Third, it stars Minneapolis Somali actor Barkhad Abdirahman, whose first movie role was as a pirate in “Captain Phillips” with Tom Hanks. Fourth, there’s a fantastic little dog. In brief: Adan (Abdirahman) is a young man who can’t catch a break. Trying to find his way, he does dumb but not malicious things. Kicked out of his mom’s apartment, and then by friends, he’s essentially homeless, working for a restaurant and delivering food, when he dings a scruffy stray dog with his car. The dog is OK but, like Adan, has nowhere to go, and the two strike up an unlikely friendship, made even more challenging by the fact that many Muslims believe dogs are unclean. Earlier this year, “A Stray” was named Best MN-Made Feature at MSPIFF. It’s a sweet story told with warmth and compassion. FMI including showtimes and tickets. Ends Nov. 3.

Now at the Dakota: The O’Connor Band Featuring Mark O’Connor. A Grammy-winning virtuoso violinist and a national champion on the fiddle, guitar and mandolin, Mark O’Connor has played with many of the greats – Johnny Cash, Wynton Marsalis, Yo-Yo Ma – and recorded on some 500 albums. But this is where his heart is: a bluegrass family band with his wife, Maggie, on violin and vocals; his son, Forrest, on mandolin; and Forrest’s fiancée, Kate Lee, on violin and vocals. Plus guitarist Joe Smart and bassist Geoff Saunders. Love bluegrass? Don’t miss this. Not sure? Here’s a sampler. 7 p.m. tonight (Tuesday, Oct. 25) and tomorrow. FMI and tickets ($35-45).