A festival begun in 2013 to raise awareness of community gardening and blue corn has grown into a multimedia Latinx music and arts showcase centered on Day of the Dead. (Latinx is the gender-neutral alternative to Latino/Latina.) 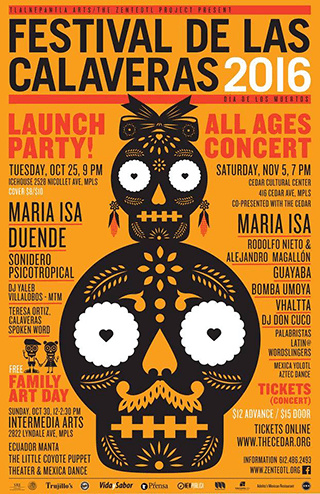 The festival moves to Intermedia Arts on Sunday, Oct. 30, for a free Family Art Day/Día de Arte Familiar, with music, a performance by a local dance group, and Day of the Dead-inspired art-making activities led by local artists. Noon – 2:30 p.m., all ages.

Mall of America to hold its first Culinary Fest

We don’t usually think of the Mall of America as a dining destination. Maybe it’s time to take another look. Restaurants are plentiful, parking is free, the weather is perfect and the taxes you pay on your bill are lower than in the cities.

Starting Sunday, Oct. 23, and ending Friday, Nov. 11, MOA will shine a spotlight on its “more than 50 dining options under one roof” (make that one huge roof) with its first Culinary Fest. Some events are free, some aren’t, and one helps a good cause. A few highlights:

Wine & Canvas. Musicians often tell their audience, “The more you drink, the better we sound.” Is it also true that cocktails enhance, perhaps even awaken your own artistic abilities? Find out at a Wine & Canvas event, where your ticket buys you paint, canvas and guidance from an artist in creating a themed masterpiece to bring home and hang proudly over your sofa. At FireLake Grill, Cadillac Ranch, Tucci Bennuch or the Hard Rock Café. Nov. 1-4. FMI and tickets ($35).

Restaurant Week. From Oct. 31-Nov. 5, a select number of MOA restaurants will offer exclusive deals. Which ones, and what deals? Details are to come, but check back here toward the end of the month.

Chef Challenge. In honor of Veterans’ Day (Nov. 11), military personnel will be paired with MOA chefs in a cooking competition with ingredients that include MREs (Meals Ready-to-Eat). In the Rotunda. Details to come; check back here in November.

Because the Mall of America is basically a small town, restaurants come and go. We have fond memories of the California Café, which closed in January 2009. It was a destination restaurant for a time – you’d go there even when you didn’t need to shop – but that was before the explosion of really good restaurants outside the megamall. We’re happy to hear that Rustica Bakery will open a new shop there this winter. Watch your back, Cinnabon.

Now at the Orpheum: “Cabaret.” It’s fun to know that this touring Roundabout Theatre Company show is a revival by B.T. McNicholl of a Tony-winning revival by Sam Mendes and Rob Marshall of a musical by Kander and Ebb based on a play inspired by a Christopher Isherwood book first published in 1939 (deep breath). The point is, good stories never die, and this is still a doozy, with great songs. We haven’t seen a Broadway tour of “Cabaret” in the Twin Cities for 17 years, so even if you saw Theater Latté Da’s splendid version in 2014, you might want to catch this while you can. Randy Harrison (“Queer as Folk”) has the plum role of the Emcee, with Andrea Goss as Sally Bowles. And we hear that young trumpeter Preston Haining, son of area jazz stars Doug Haining and Maryann Sullivan (he’s a saxophonist and leader of the Twin Cities Seven, she’s a jazz singer), is part of Roundabout’s touring band, which is cool. What a way to start the 2016-17 Broadway on Hennepin season. Six performances remain, including tonight’s (Thursday, Oct. 20). Ends Sunday, Oct. 23. FMI and tickets ($39-139).

Sunday at Kieran’s Pub: The Cutting Board. If you miss the Twin Cities Tap Festival or don’t get enough tapping at the Cowles, stop by this downtown Minneapolis pub for a live music and tap jam. $10 suggested donation at the door. (And if you haven’t been to Kieran’s in a long while, it’s now in the building once called Block E, across from the Target Center.)

Friday, Oct. 21 through Saturday, Oct. 29: St. Paul Chamber Orchestra Homecoming Performances. The SPCO tours so they can play better for us, their home audience. They should sound better than ever now that they’re back from New York City, where Times music critic Corinna da Fonseca-Wollheim called their performance at the 92nd Street Y “thrilling” and added, “The beauty, joy and freshness of the Saint Paul players’ music-making on Saturday didn’t just breathe life into well-worn standards of the repertory. To me, it was also a reassurance that, in certain quarters, participatory democracy is alive and well.” (Read the whole review here.) They’ll play Schubert’s Fifth and give composer George Tsontakis’s “O Mikros, O Megas (The small world, The huge world)” its Midwest premiere in neighborhood venues and the Ordway Concert Hall. FMI including places, times and tickets ($10-50, kids and students free).

Saturday, Oct. 22 at the Parkway: Second Annual Bow Wow Film Festival. A showing of short films not about cats benefits Wags and Whiskers, Twin Cities Pet Rescue and Safe Hands Animal Rescue, all worthy organizations. Our local celebrity Tula the PhoDOGrapher, a rescue and therapy dog who wears a GoPro and has 15,000 Instagram followers, is featured in a short and will be at the second screening. 4 p.m. (doors at 3) and 8 p.m. (doors at 7). Tickets online ($12 adults/$7 for 12 and under) or at the door ($15/$7); VIP available. Here’s the trailer.

Jerry Seinfeld will bring his signature stand-up routine to the Orpheum for three shows over two nights in January: Thursday the 19th at 7 p.m. and Friday the 20th at 7 and 9:30 p.m. Tickets ($50-150) go on sale to the general public at 10 a.m. this Friday (Oct. 21) at the State Theatre box office (no fees) and online. Yadda yadda.