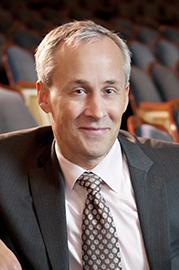 After two decades as its founding leader, Hennepin Theatre Trust President and CEO Tom Hoch will step down in mid-2017, once his successor has been appointed. On the night of whatever day that is, the State, the Orpheum, the Pantages, their glittering marquees, and all the lighted windows of the current incarnation of “Made Here” should go dark for a moment or two, as a reminder of how Hennepin Avenue looked before Hoch made his considerable mark on what is now known as the West Downtown Minneapolis Cultural District, or WeDo.

A lifelong Minneapolis resident, an attorney, and a former teacher with the Minneapolis Public Schools, Hoch worked at the Minneapolis Community Development Agency in the mid-1980s, where he coordinated the restoration of the State Theatre and the acquisition and initial operation of the Orpheum. After serving as deputy executive director of the Minneapolis Public Housing Authority, he returned to the theatres in 1996 and began a six-year effort to prevent the demolition of the Pantages and launch its restoration. The three theaters have since hosted an endless parade of Broadway tours and international, national and local acts, selling millions of tickets and bringing crowds downtown.

In 2000, Hoch formed the nonprofit Hennepin Theatre Trust to ensure that the theaters would be preserved and operated in perpetuity. In 2011, he opened the New Century Theatre inside City Center as a venue for smaller, local productions. He gathered the support of local property owners for streetscape improvements along Hennepin. He helped drive a community planning process that invited Minnesotans to reimagine Hennepin Avenue as an arts and cultural destination. Today WeDo is led by a Cultural District Alliance that includes the Trust, the Walker Art Center, Artspace (developer of the Cowles) and the City of Minneapolis.

The ginormous Bob Dylan mural at the corner of Fifth and Hennepin was a project of Hennepin Theatre Trust under Hoch’s leadership – and a nod to a former owner of the Orpheum. Most recently, the Trust bought the Solera Building adjacent to the Orpheum and almost immediately slapped a colorful mosaic mural down its front.

Hoch currently serves as board chair of the Minneapolis Downtown Council/Downtown Improvement District and the Animal Humane Society and participates in several other nonprofit initiatives. He promises he’s not going away. “I continue to be passionate about our city’s future and look forward to contributing to its future successes,” he said in a statement. Meanwhile, the Trust’s board will look for his successor. It won’t be easy to find someone to fill Hoch’s running shoes.

Larson has been with the Fringe for 17 years, coming on board five years after it was founded, moving up the ladder from technician to technical director, director of production and sponsorship and associate director before taking over as ED, a position he held for three years. He followed Robin Gillette, who led the organization from 2006 to 2013, the longest (so far) of anyone. City Pages reported that “Larson plans to initially work with his former coworker Gillette in her burgeoning arts consulting business, then start a business of his own.”

During his time at the top, Larson led the nonprofit in increasing ticket sales, then did away with tickets altogether in 2016, replacing them with day-pass wristbands, the first Fringe to try this approach. The 2016 festival saw attendance of 47,882 at 869 performances of 168 shows – down a couple thousand from 2015, but a record for a year when the festival was also up against the Olympics. “With day passes we saw audiences taking more chances and being more adventurous,” Larson said at the time. That’s the main thing he wanted, along with simplified operations in the theater lobbies.

The Fringe board will begin a local and national search to fill the position. Meanwhile, board president David Frank will serve as the principal point of contact. Larson will consult with the organization as it transitions to new leadership. The 2017 Fringe is scheduled for Aug. 3-13.

We hope Larson’s successor is as witty as he is. We have fond memories of the first Fringe preview night in July, when Larson warmed the crowd by confessing he’d made “the rookie mistake of dressing like the stage.” He was, in fact, wearing wood-plank-colored pants and a backdrop-curtain-colored shirt. If you squinted, all you saw were his head and his hands. 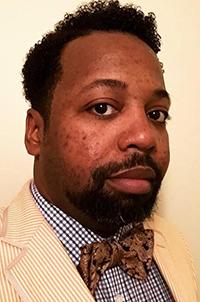 Aaaand the same day we learned that Tom Hoch and Jeff Larson would be turning in their CEO and ED hats, Northeast Minneapolis Arts Association (NEMAA) let us know that Dameun Strange will be its new executive director, taking over for interim ED Brenda Kayzar.

The nonprofit that runs Art-A-Whirl, the Fall Fine Arts show and the biennial juried art exhibition Wintertide, NEMAA fosters a sustainable community where artists can work and showcase their art. In 2015, USA Today named Northeast Minneapolis the No. 1 arts district in the U.S. NEMAA currently has more than 900 members.

An artist, activist and organizer, Strange is an award-winning composer and a Ron McKinley Philanthropy Fellow. Strange’s 2014 fellowship, awarded by the Minnesota Council on Foundations, placed him at the Bush Foundation, where he served on the Community Innovation team and received significant professional development and networking opportunities.

Before his fellowship, Strange was cofounder and artistic director of Hopewell Music Cooperative North, a community classical music education program. A Washington, D.C., native who relocated to Minneapolis to attend Macalester College, where he earned a degree in Music and English, he has worked for Macalester, ACORN, MN United for All Families, Grassroots Solutions, and Neighborhood Organizations. He has served on the boards of MRAC, Compas, Headwater Foundation for Justice and Alternative Motion Project.

Strange starts at NEMAA on Oct. 18.

Tonight (Tuesday, Oct. 11) at Nautilus Music-Theater: Rinde Eckert: “My Fools: A Life in Song.” Traveling the country on money he received as one of the first Doris Duke Performing Artist Award winners, theater artist Eckert has been on the road for two months, performing solo for audiences as small as one and as large as 300. He’s carrying a lot of gear: a small red chair, two accordions, two guitars, a euphonium, a banjo, a steel ukulele, recorders, a tambourine and a shruti box (an Indian drone box bellows). Barefoot and wearing a loose-fitting, somewhat bedraggled suit, changing instruments, characters, accents, languages (real and invented) and voices (from basso to falsetto), drawing on his vast body of work including “The Gardening of Thomas D.,” “The Idiot Variations,” “Highway Ulysses,” “Five Beasts” and “Shoot the Moving Things,” he takes his audience on a fearless, fiercely human journey of songs, anecdotes and stories. We saw this Monday night and were transported. See it tonight if you can, before Eckert packs up and hits the road. “My Fools” opens Nautilus’ 23rd season of “Rough Cuts,” an informal series of works-in-progress. On the first floor of the Northern Warehouse, 308 Prince Street in Lowertown, across from the Saints stadium. Seating is limited. Free milk and cookies. 7:30 p.m. $5 or pay-as-able. Call 651-298-9913 or email staff@nautilusmusictheater.org for reservations. (P.S. If the name Rinde Eckert rings a bell, perhaps it’s because he premiered his “Aging Magician” here during the Walker’s 2015-16 Performing Arts season.) 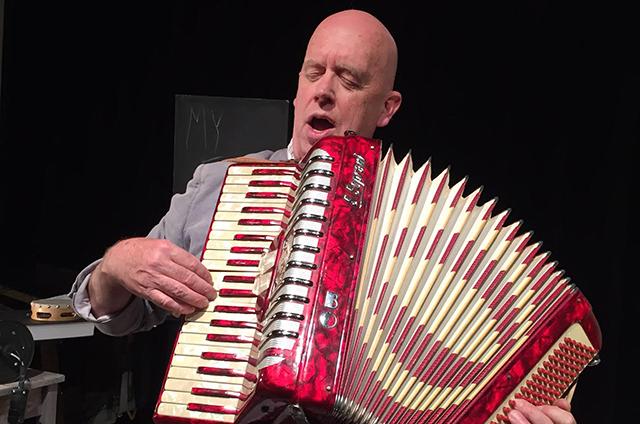 Tonight at the Walker: “Moonlight” advance screening. From AP film writer Jake Coyle: “The shimmering glow of Barry Jenkins’ ‘Moonlight,’ a poetic coming-of-age tale told across three chapters about a young gay black kid growing up in a poor, drug-ridden neighborhood of Miami, has lit up this year’s fall film festival circuit like no other film.” Stick around after for a conversation between spoken word artist/actor/filmmaker/producer E.G. Bailey, director and playwright Marion McClinton, and Dr. Terrion Williams, assistant professor of African American and African Studies at the U. Free tickets at the Hennepin lobby desk from 6:30 p.m., screening in the Cinema at 7:30.

Wednesday at Lake Monster Brewing: ReUSE Minnesota’s More Than Once Party. To launch their new, revamped website and spread the word about reuse, rental and repair businesses in Minnesota, ReUSE is throwing a party (and why not?). Mingle with reuse experts, shop for vintage records and learn more about reducing waste, supporting sustainable living and being eco-friendly. Maybe find someone to fix your caput KitchenAid or someplace to take your perfectly good winter coats that no longer fit you. The K-Town Street Foods truck will be parked outside. 5-7 p.m. Free (they’ll even buy your first drink), but register here.

Thursday and Friday at Hopkins Center for the Arts: Pen Pals presents poet Billy Collins. He didn’t become “America’s favorite poet” (according to the New York Times) by being inaccessible, or the U.S. Poet Laureate (2001-2003) by writing bad poems. Come hear Collins talk about whatever he pleases; Pen Pals events are lectures, not readings. Your ticket includes a copy of his latest book, “The Rain in Portugal.” (Not, pointedly, “The Rain in Spain.” The title poem is a humorous argument against the restrictiveness of rhyming.) Thursday evening is sold out; tickets ($40/$50) are still available for Friday morning at 11 a.m.

The St. Paul Chamber Orchestra has a beautiful new home, the Ordway Concert Hall, so why won’t it just stay put? Because it’s committed to broad community accessibility, which means taking the music to the people. Along with the Concert Hall, the SPCO has 13 regular performance venues throughout the Twin Cities and nearby, from Trinity Lutheran Church in Stillwater to Wayzata Community Church in Wayzata. The 2016-17 season also includes a three-concert series at Icehouse in Minneapolis. And now this: a night at the Turf Club in St. Paul. Eight SPCO musicians including its newest member, violinist Eunice Kim, will perform Mendelssohn’s Octet for Strings on Thursday, Nov. 3. Doors at 7, music at 8. Your ticket includes a drink. Seated show. FMI and tickets ($20).

Hoch to step down from Hennepin Theatre Trust; Larson resigns from the Fringe