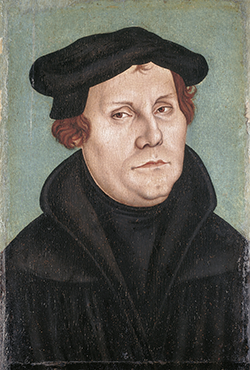 When is the best time of year to launch a big, blowout exhibition on the Protestant Reformation? Just before All Saints Day, when Martin Luther posted his “Ninety-Five Theses” on a church door in Wittenberg, Germany, and sparked a revolution. (Next year marks the 500th anniversary of that event.) And where’s the best place in the States to hold such an exhibition? Arguably the Minneapolis Institute of Art in Minnesota, Land of the Lutherans.

Opening Sunday, Oct. 30, “Martin Luther: Art and the Reformation” is history, archaeology, politics, religion, art, branding and bling. Archaeology because many items were literally found in a refuse pit in Mansfield, one of Luther’s boyhood homes. Branding because artist Lucas Cranach the Elder’s many portraits of Luther all look much the same. Cranach created a consistent, instantly recognizable image: Luther as his own logo. Bling in the form of gilded silver and bejeweled reliquaries and elaborate vestments, objects of the Catholic church Luther challenged.

There’s the pulpit where Luther preached his final sermon, the helmet worn by Holy Roman Emperor Charles V, and a magnificent 157-panel altar piece that tells the story of the New Testament, using Luther’s words, and before which one of the German scholars at the press preview Thursday literally dropped to his knees. Handwritten notes for Luther’s translation of the Bible. Several Bibles. Furniture from Luther’s studio, and personal possessions including his folding travel spoon. Scads of paintings, prints, books, sculptures and manuscripts. Ornately decorated daggers. An actual indulgence, one of the get-out-of-purgatory-faster-for-a-fee documents that inspired the Theses, complete with its wax seal. Most of the objects are traveling outside Germany for the very first time.

Even if you’re Lutheran — maybe especially if you’re Lutheran — the show is a lot to take in and dense with information. But we’ll never again have such an opportunity to roll up our sleeves and learn more about the Reformation and a man who changed the world. Take a tour with a docent, or rent an audio guide. FMI and tickets ($20/$16/free). Closes Jan. 15, 2017.

You have two more weekends to see Ten Thousand Things’ production of Shakespeare’s “Pericles,” and here are a few reasons why you should, if you can.

Along with changing the original ending (she couldn’t tolerate the misogyny), director (and TTT’s founding artistic director) Michelle Hensley has done something truly remarkable with this sometimes clumsy, challenging play. She has made it easy to follow and fun to watch.

One problem with “Pericles” is that the title character, played by Ansa Akyea, is always on the move. He caroms between Antioch, Tyre, Tarsus, Pentapolis, and Ephesus. He’s on ships, on shore and even in the sea, swimming for his life. It’s easy to lose track and give up. Hensley’s solution is very Minnesotan: “Pericles” on-a-stick. She identifies each new scene with a signpost – the city’s name on a stick. Akyea lets us know when he’s at sea by carrying a stick-mounted drawing of a ship. Another character’s tombstone is trotted out on a stick, as is Diana’s temple. It’s clear, efficient, and freeing.

As always in a TTT play, most members of the cast play multiple roles. Special shouts to Karen Wiese-Thompson, who goes from chatty narrator Gower to radiant, no-nonsense Goddess Diana, with moments in between as a loving nurse and a wise healer. And to Pearce Bunting, who chills us to the bone one moment and makes us laugh out loud the next. Only Akyea has just one role, and he performs it with such sincerity and gravitas that we almost forgive him for being a clueless doof when it comes to women.

Trevor Bowen’s costumes are brilliant and amazing. No wonder he won the Emerging Artist award at the Iveys in September. As ever, one-man-band Peter Vitale’s original music and sound artistry add depth, color and shimmer to what’s happening before our eyes.

You can find “Pericles” this weekend at the Guthrie’s Dowling Studio, after which it returns to Open Book for the final four performances. FMI and tickets ($30; under 30, pay-what-you-can). 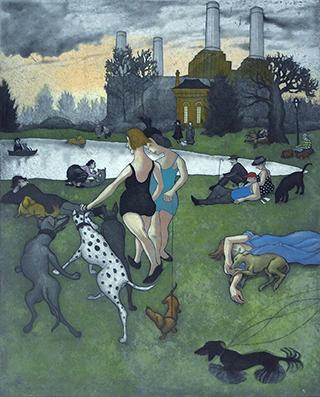 Friday (Oct. 28) at Highpoint Center for Printmaking: Opening reception for “Art of the Print: Recent Work from the Royal Society of Painter-Printmakers.” Established in London in 1880 in response to the Royal Academy of Arts’ snub of prints, the Society is a premier printmaking organization, with more than 90 members from across the globe. Eighteen are featured in this show, where landscape is a recurring theme. 6:30-9 p.m. Free. Through Nov. 23.

Saturday at Open Book: Peter Himmelman discusses his new book, “Let Me Out.” Most of us know Himmelman as a Grammy- and Emmy-nominated singer-songwriter, former member of the Minneapolis band Sussman Lawrence and solo artist with several albums to his credit. Today Himmelman has his own company, Big Muse, a new gig teaching leadership lessons to execs at McDonalds, Pandora, United Health Group and Gap, among others, and a new self-help book, “Let Me Out: Unlock Your Creative Mind and Bring Your Ideas to Life.” He’s been profiled by the Kellogg School of Management and written up in Forbes. Self-help books can be simplistic, quick-fixy and glib. But Himmelman has interesting stories to tell from his life on the road, and his strategies for getting past fears, getting things done, being more creative and making something of yourself are direct and appealing. He’ll probably have audience members try a few on Saturday. 8:30 p.m. Free.

Saturday and Sunday at the U of M’s Coffman Memorial Union: Twin Cities Veg Fest 2016. Two days of cooking demos, speakers, exhibitors, food vendors and samples promote a more healthy and compassionate plant-based diet. But anyone who eats can show up; they won’t kick you out for being an omnivore, and you might leave thinking that vegetables aren’t so bad. 11 a.m. – 4 p.m. both days. Free.

Sunday in the Ordway Concert Hall: Sphinx Virtuosi with Catalyst Quartet. The all-black and Latino classical chamber ensemble sold out Carnegie Hall earlier this month. The Schubert Club, the Ordway and the SPCO have joined forces to bring them here for an afternoon performance. Led by the Catalyst Quartet, they’ll play music by composers of Latin heritage including Piazzolla, Villa-Lobos and Ginastera. 3 p.m. FMI and tickets ($19-$39). Pssst: Until 12 a.m. Oct. 30, use SPHINX50 at checkout and save 50%.

Starts Monday on your audio streaming device: Minnesota Opera’s “The Shining.” Based on the novel by Stephen King, with music by Paul Moravec and libretto by Mark Campbell, this Minnesota Opera commission premiered in May at the Ordway to sold-out crowds. Recorded live in performance, the audio will be available from Classical MPR for on-demand streaming for just one month. Because it contains strong language, it won’t be broadcast live. Classical MPR will also post a scene-by-scene guide with production photos, so you’ll get to see Erhard Rom’s terrific sets. Streaming begins at 1 p.m.

Monday at Icehouse: NOH Band Featuring Tim Berne, David Torn and David King. New York-based jazz saxophonist-composer Berne is a powerful player with complex ideas that lure you in. We’re still smiling about his last appearance at Icehouse in May 2015 with his band Snakeoil. He returns with guitarist Torn and drummer King, a brand-new trio that will give its first performance in Milwaukee on Friday before coming here. FMI and tickets ($18 advance, $20 door).

‘Martin Luther’ opens at Mia; why you should see ‘Pericles’