More than 50 films screening at the Twin Cities Film Fest in St. Louis Park have Minnesota connections. Either they were made by Minnesota filmmakers, and/or made here in Minnesota, and/or the producer, director or a major actor is a native Minnesotan. That’s even more than last year’s tally, and something that should please Snowbate boosters. The number includes both features and shorts.

Wednesday’s opening night film, the locally made drama “Blood Stripe,” directed by Twin Cities-based Remy Auberjonois, sold out. You have another chance to see it at 3 p.m. Friday, Oct. 28. FMI.

Between tonight and when the festival closes on Saturday, Oct. 29, you can catch several films with home state ties. (To see the full list, go here, look under Film Categories, then check the MN Connected box.) Some recommendations:

“Free CeCe!” Incarcerated in men’s prisons after defending her life outside a Minneapolis bar in 2011, African-American transgender woman CeCe McDonald has since emerged as an activist. This locally filmed documentary was executive produced by “Orange Is the New Black” star Laverne Cox, who’ll be present for the screenings on Saturday, Oct. 29, along with McDonald and director Jacqueline Gares. McDonald will take part in a Q&A after both screenings. FMI and tickets.

“Tarkovsky: Time Within Time.” A poetic documentary into the life and work of Russian film director Andrei Tarkovsky, the most famous Soviet filmmaker since Eisenstein. His films include the science fiction masterpiece “Solaris” (the 1972 version). Director P.J. Letofsky is from Minnesota and will attend. Screens Saturday, Oct. 22 at 1:10 p.m. and Thursday, Oct. 27 at 11:45 a.m. FMI.

“Iron Will.” Narrated by Billy Bob Thornton, this powerful documentary looks at post-traumatic stress disorder (PTSD) from the perspective of veterans. Featuring vets from the Iraq, Afghanistan, Korea, Kuwait and Vietnam wars – director Sergio Valenzuela is an Iraq veteran – it reveals the everyday struggles of sufferers and considers promising new therapies. Producer Tim Vandesteeg is originally from Minnesota. Screens Saturday, Oct. 22 at 7:15 and 7:30 p.m., Tuesday, Oct. 25 at noon. Valenzuela will attend. FMI.

A few more films with Minnesota links: “I Do?” A quirky documentary about marriage. Director Joe Brandmeier, who previously worked with Bill Pohlad at River Road Entertainment, will attend. “First Girl I Loved,” a Sundance audience award winner that Indiewire called a “woozy and wonderful queer teen romance.” Executive producers Stacey and Peter Parshell Jensen are from Minneapolis and will attend. “Miles Between Us,” a made-in-Minnesota father/daughter road trip film. Director Andrew Hunt and several cast members are from here and will attend. And the darkly funny “Funeral Day.” Director Jon Weinberg, who grew up in St. Louis Park, will attend.

An abundance of readings and author events

Saturday at Grace Trinity Church: “Twin Peaks” co-creator Mark Frost presents “The Secret History of Twin Peaks.” We want to know – why pie? Doors at 6 p.m., event at 7. Free and open to the public, but please RSVP. Book signing after; books available there. 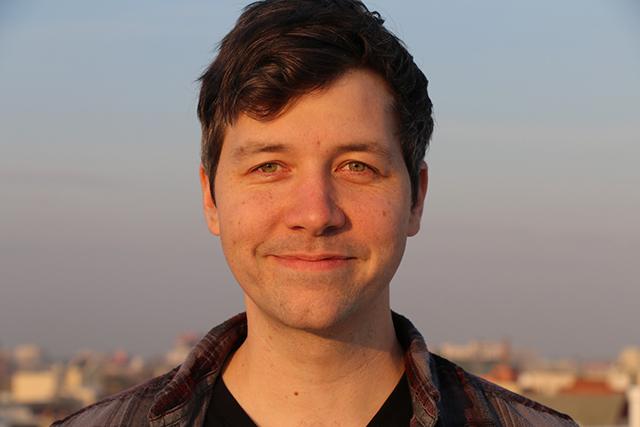 Saturday at House of Balls: Dylan Thuras: “Atlas Obscura: An Explorer’s Guide to the World’s Hidden Wonders.” Other travel writers urge us to visit places like the Grand Canyon, Big Ben and the Taj Mahal. Minneapolis native Thuras’ tastes – and those of his coauthors, Joshua Foer and Ella Morton – tend toward the weird, the unexpected, the marvelous and the bizarre. Like, for example, the Singing Sand Dunes of Qatar; glowworm caves in New Zealand; a baby-jumping festival in Spain; a baobab tree in South Africa so large it has a pub inside; the Escher-like stepwells of India; museums of asparagus, bad art and murderers; and the Questionable Medical Device Collection at our own Science Museum. The Atlas has won raves from people like Neil Gaiman, Lena Dunham, Guillermo del Toro and high-wire artist Philippe Petit. This will be an afternoon of entertainment and discovery, with live music, food and drink, and hands-on art workshops with House of Balls founder Allen Christian. 3-7 p.m. FMI and tickets ($25 and up; kids 12 and under free).

Monday at Open Book: Book launch celebration for “This Is Where I Am: A Memoir” by Zeke Caligiuri. Currently incarcerated at the Faribault Correctional Facility, Caligiuri, who grew up in South Minneapolis in the 1990s, when we were known as “Murderapolis,” gives a clear-eyed, no-excuses account of how he got there. He can’t attend; family members, friends and writing mentors will read selections from his book and his poetry. Doors at 6 p.m., event at 7. Free and open to the public, but please RSVP. Books available for purchase.

Monday at Magers & Quinn: Heidi Andermack and Amy Lynn Brown present “Chowgirls Killer Party Food: Righteous Bites & Cocktails for Every Season.” Because you so want to be the host(ess) with the most(est) during the coming holidays. The meet-and-greet includes a brief welcome and talk at 7:30 and duh, killer refreshments. 7-8:30 p.m. Free.

Monday at Plymouth Church: Laure-Anne Bosselaar. Literary Witnesses starts its 19th season with the Belgian-American poet whose honors include the Isabella Gardner Prize for Poetry and the Pushcart Prize. Poet Jim Lenfestey, the series’ longtime curator, fell in love with Bosselaar’s poems and her voice, which he calls “a gravelly mix of Europe and America and angels.” Bosselaar grew up in Belgium in the aftermath of Nazi occupation; her collection “The Hour Between Dog and Wolf” chronicles that experience. Her language is luscious, her images as clear and dimensional as a panoramic view out a window. 7 p.m. Free. Reception after.

And now, the bad news: Lily King has canceled her Tuesday (Oct. 25) Club Book date at Stillwater Public Library due to illness. A new date has not yet been confirmed, but everyone hopes to reschedule for early 2017.

Tonight (Friday, Oct. 21) at Landmark Center: Heather Masse. She’s best known as a member of the folk trio The Wailin’ Jennys and a regular on Garrison Keillor’s “A Prairie Home Companion.” She’s also a New England Conservatory-trained jazz singer whose beautiful voice, lilting vibrato, impeccable phrasing and natural swing are a perfect fit with standards like “Mood Indigo,” “Con Alma” and “Love Is Here to Stay,” all songs she recorded with trombonist Roswell Rudd on a recently released Red House album. Rudd won’t be at Landmark Center, but we’re promised a mix of jazz, folk, and whatever else Masse wants to sing with pianist Jed Wilson. In the Weyerhaeuser Auditorium. Cocktail hour (with hors d’oeuvres) at 7 p.m., concert at 8. FMI and tickets ($20 advance, $25 door). 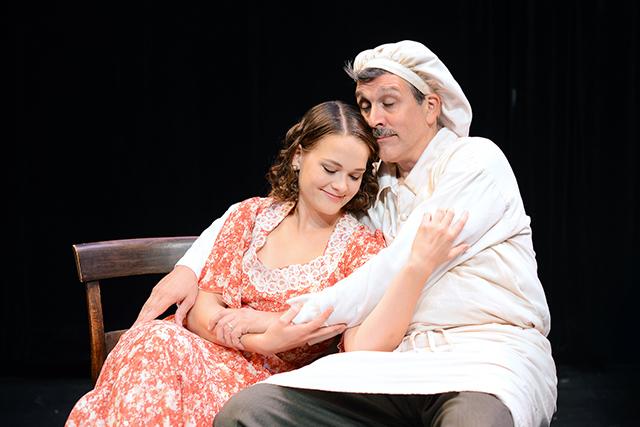 Opens Saturday at Artistry: “The Baker’s Wife.” Benjamin McGovern directs, Bradley Greenwald and Jill Iverson star in the much-loved but rarely seen musical by Stephen Schwartz (“Pippin,” “Godspell,” “Wicked”). When the wife of the baker in a small French town runs off with a hunky chauffeur, the baker stops baking and the villagers meddle. Famous songs: “Meadowlark,” “Gifts of Love.” 7:30 p.m. FMI and tickets ($41/$36 seniors/$29 under 18). Ends Nov. 12.

Saturday at the O’Shaughnessy: “Test Pilot: A Dance Opera.” Telling the tale of the birth of flight as seen by the Wright Brothers’ sister, Katharine, choreographer Penelope Freeh and composer Jocelyn Hagen weave in their own family stories. This dance/music hybrid premiered at the O’Shaughnessy in 2014 and won a Sage Award. With six singers, a string quartet, four dancers and video artistry by Justin Schell. 7:30 p.m. FMI and tickets ($19-27). 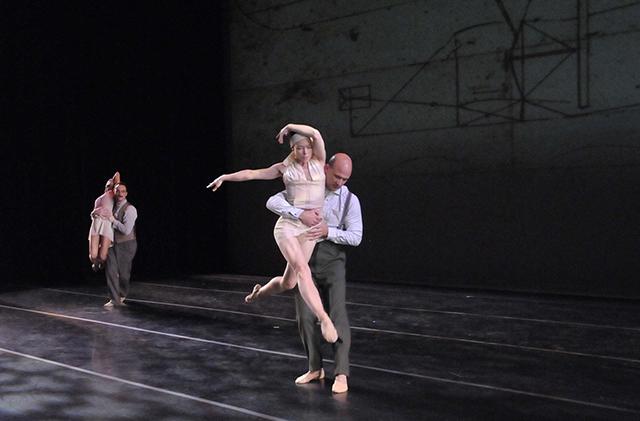 Courtesy of the O’Shaughnessy
The ‘Test Pilot’ dancers

Saturday and Sunday at MacPhail: Minnesota Bach Ensemble: “Storms, Comfort, and Light.” The excellent ensemble led by Andrew Altenbach opens its 5th season with music by Haydn (Symphony No. 8, “Le soir”), Telemann (Suite in E minor) and, but of course, Bach. Two sunny cantatas are on the program: “Siehe, ich will viel Fischer aussenden” (Behold, I will send out many fishers) and “Ich bin vergnügt mit meinem Glücke” (I am content in my good fortune). With Linh Kauffman, soprano; Tascha Anderson, mezzo-soprano; David Walton, tenor; and Thom Dreeze, baritone. In MacPhail’s light, bright and airy Antonello Hall. Saturday at 7:30 p.m., Sunday at 3 p.m. Tickets ($25; $10 students with ID).