Kate Hamill is in a good place. Her adaptation of Jane Austen’s “Sense and Sensibility” launched the Guthrie’s 2016-17 season and runs through Oct. 29. It opened the Folger’s season in Washington, D.C., and has been extended through Nov. 13. It premiered off-Broadway in 2014 in a Bedlam production and won a slew of critics’ picks and raves, then re-opened in 2016 and is still going strong after several extensions.

Hamill is also an actor who plays Marianne Dashwood, the “sensibility” sister, in the New York production. So her play is in three places at the same time, plus she’s in one of the casts.

Hamill has written six plays of her own and acted in many more, but she’s been bitten by the adapter bug. She has two more adaptations ready to go, “Pride and Prejudice,” another Jane Austen, and “Vanity Fair,” based on the novel by William Thackeray. She’s reworking her “Little Women,” based on Louisa May Alcott’s book. She recently talked with a theater about adapting “Middlemarch” by George Eliot. “I don’t think they’re going to go for it,” she said last week by phone from New York, “but I love ‘Middlemarch.’ ”

Has PBS come calling yet? “No, but I wish they would. I love PBS. I’d be thrilled.” Someone please tell Rebecca Eaton.

MinnPost: You call Jane Austen “my girl.” Why is she so special to you?

Kate Hamill: I started really getting into Jane Austen in high school. I’m not the sort of Austenite that dresses up in bonnets and dresses and goes to high tea, but I respect those people. I grew up in a very small town [in upstate New York] and there wasn’t a lot to do, so I did a lot of reading, and I was taken by her.

She’s so witty. The romance is the thing people tend to focus on, because [her stories] are really romantic. How often do you read an entire book where you’re desperate for the two main love interests to touch each other’s hands or kiss? The tension is so great. But she’s so witty, so funny and so incisive – so observant. And her characters are universal. They’re people we still see today.

When you’re an actor in New York, the opportunities are limited. They’re limited for all actors, but men’s roles outnumber women’s disproportionately. I love the classics, but they tend to have more men in them. I was getting very frustrated with seeing female artists dropping out because there aren’t the opportunities. I thought I wanted to make new classical work for women – new work for women in general, but especially new classical work – and Jane Austen seemed like such a good place to start, because I love her so much and also because it’s rare for her to be adapted by a young woman. Most adapters are men. I felt I [share] a point of view with Austen in some ways because I’m also a young woman. I also wanted to play up the humor, because she gets dismissed as chick lit a lot, and I think she’s hysterically funny. So I wanted to play up that, as well as the social commentary.

MP: What is your process of adapting a novel for the stage? Where do you start?

KH: First of all, there’s no point in doing a new play or almost any piece of art without a point of view. This is especially true for an adaptation. “Sense and Sensibility” is so beloved, including by me. Why would I transmute it into another form when it’s so good on its own, unless I have something very specific to say?

I started out with, “What does ‘Sense and Sensibility’ mean to me?” Not to scholars or in the popular view, but to me, personally? And what does that activate in me? For me, the sisters [Elinor Dashwood and Marianne Dashwood] are a reaction to social pressures, and the whole story is about our reaction to social pressures. Do we follow the rules, or do we break the rules and follow the dictates of our own conscience? I think there are real consequences for both of those things, especially for women, and especially for disadvantaged people in that kind of community. So I started from that point of view and built off that.

At first I was very faithful to the novel, but it quickly came to me that I had to do more playwriting than that, because Jane Austen’s sentences are so beautiful and complex, and often they’re a whole page long. A sentence can only be so long before we start losing the meaning. So I started playwriting, and that became more and more a thing.

I would say at this point that this play is about 60 percent me and about 40 percent Austen. It’s paying homage to the novel without completely recreating it. It’s using the skeleton of the novel and turning that into its own mutant, if that makes any sense. 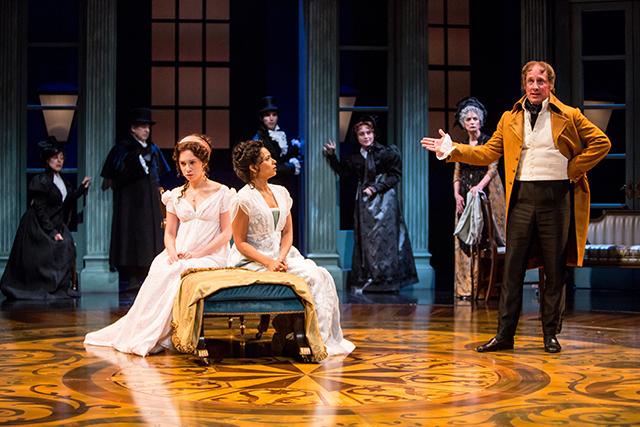 MP: It’s such a sacred novel. Did you have to talk yourself into messing with Jane Austen?

KH: I did! I had some trepidation about how I felt about it, and how other people felt about it. I expected people to come after me with pitchforks. I’m sure some people are not happy with it. But most of Shakespeare’s plays are adaptations. And if you’re going to make something your own and have a point of view, you have to summon up your courage and be brave.

I also told myself a lot, “It’s not like I’m destroying the novel. It’s not like all copies of this novel will be burned.” I do love Jane, and this is not competition for the novel. This is a point of view on the novel. What I hope is that people watch the play, then go back and read the novel, because they’re two different and legitimate pieces of art.

MP: Do you think she’d be happy with your play?

KH: I hope so. Part of what I did in preparation was to read a lot of her letters. I really tried to get to know her, because I wanted that spirit to creep in. There are monologues the characters say as dinner conversation [in the play], and I whorled bits of her letters into some of those. She was such an irreverent, funny person, and she loved the theater so much, I feel like she would approve of an effort to not only give her her due, but also bring an additional point of view. I hope I don’t have to answer to her in the afterlife.

When I came up with the idea to do this adaptation, I was in the car with Bedlam’s cofounder, Andrus Nichols. We were talking about stuff we could do together, and I said, “I think I’m going to write an adaptation of ‘Sense and Sensibility,’ and we’ll play the sisters.” At that moment, we passed a diner called “Marianne’s,” so I felt like that was a sign from Jane Austen. And I’m heartened by the fact that the response from Jane Austen fans has by and large been so positive.

MP: You’re an adapter and an actor. Which is your favorite, and why?

KH: I’m truly 50/50. The balance is what keeps me happy and sane. I think they engage different parts of my brain. These days, I do the [Bedlam] show eight times a week, and I have sort of a normal actor life. I audition and the whole bit. But I also write during the day, and that’s what keeps me happiest.

It’s sort of like cross-training. If you’re a runner, it’s important to take yoga or whatever because otherwise all your muscles get tight and it’s not good for you. I also feel like keeping my oar in both waters keeps me loose and playful.

In Shakespeare’s day and for a long time in history, theater was not so specialized. People did all sorts of things. Shakespeare was a producer and an actor and a playwright, and I think that is what helped him to develop so much as a person and what makes his plays so interesting.

MP: In the New York production, you’ve been Marianne for a long time What is it like seeing someone else play a role you wrote and originated? Are you tempted to jump in and say something?

KH: Oh my god, not at all. It’s actually really gratifying to see other people’s Marianne. It shows that although I wrote this character with myself in mind, other people can bring themselves to it completely, and it’s completely legitimate, and it’s every bit as alive. All sorts of women can play Marianne. That’s very humbling for me, and it makes me happy that I made work for all these women. I don’t feel ownership of it in that way. I feel celebratory.

MP: Where do you write? Do you write in a particular place?

KH: I know some writers who have a home office, their Zen fountain and stuff, and I wish I was like that. I’m way more of a vagrant. I write at home; I write on the subway. When we’re doing eight shows a week in New York, I write in the back of the stage. I write in random coffee shops. My preference is to write at home on our couch in Queens, but I pretty much write anywhere. I’m not a desk person. I’m almost allergic to desks, so even if I’m in a room with a desk I tend to sit on the floor. I am truly the camper of writers.

“Sense and Sensibility” continues at the Guthrie through Oct. 29, with Sarah Rasmussen directing. FMI and tickets ($26-77). Hamill also told MinnPost that she’s working on developing another work for Rasmussen – a new adaptation. So we can look forward to that.