On now at the Children’s Theatre, “Cinderella” is a big, bright, silly, noisy, eye-popping hoot. Adapted by John B. Davidson, directed by Peter Brosius, the holiday show has been given the main stage, with a large cast, lavish costumes, fabulous sets, a seven-piece orchestra (led, natch, by Victor Zupanc) and an updated script full of contemporary topical references, pop songs and jokes. The pace is nonstop as scenes from the fairytale are interspersed with scenes from a Victorian Christmas party, with singing, games, festivities and hijinks that mask the set changes happening behind the curtain.

And it’s wildly interactive. We’re asked to stand up and scream whenever we hear a certain word. Candy, T-shirts, and pieces of cake are lobbed into the crowd. A camera is trained on a good-natured front-row audience member, whose surprised face occasionally appears on video screens. Birthdays are announced. A Princess for the Day is named. For a minute, it feels like the Chanhassen.

This year’s “Cinderella” features most of the cast from the 2013 production, when the luminous Traci Allen Shannon (then Traci Allen and the newest member of CTC’s resident acting company) played the title role for the first time. Acting company members Gerald Drake, Autumn Ness, Dean Holt and Reed Sigmund reprise their roles as, respectively, the Lord High Chamberlain, the wicked stepmother, and the outrageously over-the-top stepsisters Pearl and Dorcas. Ness, Holt and Sigmund are all terrific, often engaging in amazing feats of physical comedy, considering none is under 30. And the tiny puppet mice and birds are back, cavorting on stage, hovering and peeping outside a window.

New this year: China Brickey as the Fairy Godmother and David Murray as Prince Eric. We last saw Murray at the Ritz in Theatre Latté Da’s “Ragtime,” where he played Coalhouse Porter (opposite Shannon as his love, Sarah). Murray was wonderful as Porter and he’s wonderful here, imbuing what could be a cardboard character with nobility, warmth and grace. There are no overt Christmas lessons or messages in the “Cinderella” parts of this production, but watch for small signs that Prince Eric is learning about love and compassion from the former “guttersnipe” who wins his heart. We can’t wait for Murray in his next role, whatever that may be.

There’s so much to see and hear that “Cinderella” approaches sensory overload. Aimed at all ages, it will leave kids wired and grown-ups depleted. As we left the Sunday afternoon performance, children were jumping up and down, running in circles and squealing in the lobby while parents and grandparents dragged along behind. You won’t need a nap before you see it, but you’ll probably need one after.

“Cinderella” continues at the Children’s Theatre through Jan. 8. FMI and tickets ($15-81).

The Minnesota Opera’s first-ever production of Richard Wagner’s “Das Rheingold” – the start of the mighty four-opera Ring Cycle, a pinnacle of the genre – opened Saturday at the Ordway. Just four more performances remain before it closes next Sunday afternoon. We saw the final dress rehearsal last Thursday. Though that wasn’t an official public performance and can’t be reviewed (for reviews, see Michael Anthony in the Star Tribune and Rob Hubbard in the Pioneer Press), it was more than enough to earn a strong don’t-miss-this. 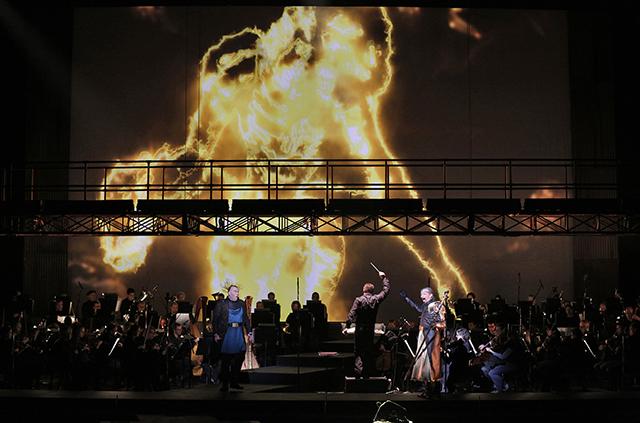 1. Honestly, it’s not too long. You might hear (or read in the Pioneer Press) that “Das Rheingold” is “extra long.” It’s about 2½ hours. There’s no intermission. But it doesn’t seem that long. All three “Lord of the Rings” movies are longer – in the original, not the extended versions. And if you know “Lord of the Rings,” you’ll see that Tolkien stole many ideas, including the main one about the ring itself, its powers and perils, from Wagner.

2. The staging. Minnesota Opera had a problem: The 80-piece orchestra required for “Das Rheingold” wouldn’t fit in the Ordway’s pit. So they had to put the musicians and conductor Michael Christie on the stage. But where would the cast perform? Stage director Brian Staufenbiel came up with unorthodox solutions that work brilliantly. Build a stage-spanning bridge above the orchestra for Wotan, Fricka and the other gods. Use the pit for the Rhine River and Nibelheim, the underground world of the Nibelung dwarves. Use projections (designed by David Murakami) to illustrate the rippling, shimmering Rhine; Valhalla, home of the gods; the craggy underground; the giants. (We weren’t entirely convinced by the projections of the giants, but the rest were impressive.)

3. The costumes. Mathew LeFebvre’s combination of Arthurian opulence and futuristic cyberpunk was spot on. Mezzo soprano Denyce Graves’ Erda dress and headpiece were magnificent. Singing the lengthy role of Loge wearing his heavy, complicated headpiece must have been a challenge for tenor Richard Cox, but he didn’t let it show. The giants Fafner and Fasolt (Julian Close and Jeremy Galyon) were reminiscent of Mr. Book and Mr. Hand in the movie “Dark City.” Dennis Petersen as Mime could have been a Borg. And all the little Nibelungens – actually child actors – wore rags and misshapen backpacks. On the whole, the costumes were as intriguing and visually rewarding as the projections.

4. The singing. Greer Grimsley, THE American Wotan, in his bass-baritone awesomeness. Right here in Minnesota. And superstar Graves, who appears only briefly as the goddess of the Earth, warning Wotan not to be stupid about the ring, yet manages to raise every hair on the back of your neck. And bass-baritone Nathan Berg as Alberich, whose resonant voice descends into depths beyond Nibelheim. And everyone else in the stellar cast.

5. The potential. It’s hard to believe that Minnesota Opera has never before done anything from The Ring. (In the opera’s entire 53-year history, it has produced only one other Wagner, “The Flying Dutchman,” in 1992 and 2002.) “Das Rheingold” was programmed before the arrival of Ryan Taylor, the new artistic director, so he didn’t pick it personally. But when we spoke in September, he was cautiously optimistic about maybe continuing with the cycle. “We want to see what the response is like from the public and from our donors,” Taylor said at the time. “If it looks like the kind of thing that people are excited about and want to help us get there, it would be a tremendous thing for our organization to be able to say that we’ve produced a Ring Cycle at some point.” Filling the house and cheering loudly can’t hurt.

Tonight (Tuesday, Nov. 15) at a movie bigaplex near you: National Theatre Live: “Hamlet.” An encore performance of the original 2015 broadcast starring Benedict Cumberbatch as the tormented Dane. It’s not the first time we’ve mentioned it here, but it is the first since “Dr. Strange” opened. 7 p.m. Go here, click Buy Tickets, and enter your ZIP code to find the theater nearest you.

Tonight at Kieran’s Irish Pub: The Not-So-Silent Planet: A Speculative Open Mic. Now in its second season, this monthly series is the nation’s only open mic dedicated to speculative fiction, which includes fantasy, science fiction and speculative horror. Tonight’s featured performer is Javier Morillo, president of Service Employees International Union (SEIU) and a leader in the immigrant rights movement. Some of us saw him at the Bryant-Lake Bowl last week on election night, where he appeared on a panel for The Theater of Public Policy. Phillip Andrew Bennett Low hosts. Doors and sign-up at 8 p.m., show at 8:30 p.m. Tickets $5-$10 sliding scale, $3 with a Fringe button. 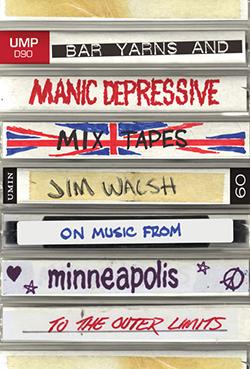 Wednesday at Magers & Quinn: Jim Walsh “Bar Yarns and Manic Depressive Mix Tapes” book launch, reading and signing. Jim Walsh, who sometimes writes for MinnPost and regularly for the Southwest Journal and has also written for Rolling Stone, the Village Voice, the Pioneer Press and City Pages, has long been one of our favorite writers. So we’re happy to see this new collection of his writings on music – and life, his family, his hometown of Minneapolis, Paul and Sheila Wellstone, and the time his young daughter stuck an eraser up her nose, to give a few examples of what else he has covered in the past 30 years. If you want, you can zero in on his writings about Prince or the phone conversation (his idea) between Yoko Ono and Curtiss A. Or you can start reading anywhere. Walsh’s writing is musical, rhythmic and tuned, with a throughline of humanity. After the 7 p.m. event at Magers & Quinn, there will be a 9 p.m. party at Morrissey’s Irish Pub with music. Can’t make it Wednesday? On Thursday at 7 p.m., Walsh will be at the Driftwood Char Bar for a signing.

Thursday through Sunday at the Park Square Theatre: “A Raisin in the Sun.” Directed by Warren Bowles, Park Square’s staging of Lorraine Hansberry’s play about a black family on Chicago’s South Side in the 1950s has won raves from critics and audience members. We haven’t yet seen it, but we’re going to try, and we wanted you to know that regular performances end Sunday, Nov. 20. Tickets are also available for daytime student matinees that end Tuesday, Nov. 22. Aimee K. Bryant, Darius Dotch and Greta Oglesby are among the cast. On the Andy Boss Stage. FMI and tickets ($25-60).

Thursday through Saturday at MCAD: MCAD Art Sale. This is the big one – the nation’s largest college art sale, held every year the weekend before Thanksgiving, filled to the rafters with nearly 7,000 original works of art by 400 students and alumni, with an average price of less than $100 (and nothing over $1,500). Serious collectors show up in droves for Thursday’s first-access opening night (tickets $150) but there’s always lots left on Friday ($30/$25) and even Saturday, when getting in is free. Thursday 6-9 p.m., Friday 6-9 p.m., Saturday 9 a.m. – 5 p.m. Buy tickets here.