Leading up to and especially since the election – just three short weeks ago – many live performances have felt more pointed and pertinent to issues we face as a nation. That seems true even for the Guthrie’s “Lion in Winter,” now running opposite “The Christmas Carol” on the proscenium stage.

James Goldman’s 50-year-old historical comedy-drama, set during Christmas 1183, is a sharply written, brutally funny battle between King Henry II, Queen Eleanor of Aquitaine and their three sons over who will succeed Henry on the throne. Barbed words fly thick and fast; moments of tenderness are rare and suspect. Announced back in March as the Guthrie’s “alternative holiday delight,” the play now reads more like a long Thanksgiving weekend with a family whose members voted on opposite sides.

Directed by Kevin Moriarty, making his Guthrie debut, “Lion” is still very funny, with many laugh-out-loud lines. (Including this, from Eleanor to Henry, that brought a smattering of applause: “What kind of spindly, ricket-ridden, milky, wizened, dim-eyed, gammy-handed, limpy line of things will you beget?”) But it’s also profoundly sad, because this is a horribly dysfunctional family.

Henry and Eleanor’s eldest son and heir, Henry, has died. Their three remaining sons, Richard, Geoffrey and John, like the daughters of Lear, are tussling for power. Eleanor is present only because Henry has let her out of prison for the holidays, and the two need to reach some sort of agreement, in part because Philip II of France is insisting they do or he’ll take back part of France that Henry currently rules. Also in the mix: a young woman named Alais Capet, Philip’s sister and Henry’s mistress, who was raised like a daughter by Eleanor and is officially betrothed to Richard, though Henry is saying he’ll marry her to John. Or perhaps he’ll have his marriage to Eleanor annulled (the Pope owes him a favor) and marry Alais himself. Meanwhile, middle son Geoffrey tries to get noticed.

As a ruthless, conniving Eleanor, Laila Robins owns the spotlight. She’s portraying one of the wealthiest, most powerful women in history – Eleanor of Aquitaine owned heaps of land, led armies, wed two kings, and had 11 children – and seems perfectly at home in the role. It’s her voice that rings most clarion through the theater, her presence that draws the eye. As Henry, Kevyn Morrow holds his own but seems more capricious in his machinations, like he’s playing a game to amuse himself. As for the sons, Torsten Johnson as Richard Lionheart seems most likely to be king someday, Michael Hanna as Geoffrey doesn’t have a lot to do and Riley O’Toole as John is mostly annoying. Thallis Santesteban does her best with Alais, but it’s not a strong role; it’s hard to imagine why Henry would find her that interesting.

The entire cast must compete with the jaw-dropping set designed by Beowulf Boritt and Christopher Ash. It’s a tower on a turntable, a massive, revolving timbered cage of levels, stairs and rooms, topped by rows of flickering candles and framed on either side by slowly falling snow. Like some great museums  –  for example, the Guggenheim Bilbao – it’s so splendid that it almost overshadows the art within.

MECA and JFund winners are announced

Three creative Minnesota musicians – Jay Afrisando of Falcon Heights, Zacc Harris of Minneapolis and Lynn O’Brien of Minneapolis – have won this year’s Minnesota Emerging Composer Awards (MECA) from the American Composers Forum. Each will receive $3,000 to pursue a new project that will boost their career and artistry.

Indonesian composer and improviser Afrisando will create a project of contemporary music for a mixed ensemble of nine musicians on various kinds of instruments: Gamelan, western, electronics and built. Zacc Harris, the jazz guitarist you’re most likely to see around the Twin Cities – he’s a member of the Atlantis Quartet, leads his own group and trio, and plays with at least eight other bands – will compose a set of new modern jazz works and make an album with the Zacc Harris Group. Composer, vocalist, multi-instrumentalist and performing artist O’Brien will compose and release a “live album” of her new music, integrating folk, soul, R&B and jazz.

The Composers Forum also announced the 10 winners of this year’s Jerome Fund for New Music (JFund) awards, which range from $6,500 to $8,500. The JFund program supports the production of new works by emerging composers and emphasizes collaboration; composers apply with a partner. Three of the 10 winners are Minnesotans. Eagan’s Aleksandr Brusentsev will write a Concerto for Flugelhorn for soloist Imogen Hancock and London’s Ensemble Eroica. Asuka Kakitani of Northfield will compose a Solo Suite for Percussion featuring Minnesota-based percussionist Dave Hagedorn. JP Merz of Minneapolis will create an evening-length song cycle, “Distances,” for singer/songwriter Paul Smiri and a small chamber group.

Both MECA and JFund are supported with funds from the Jerome Foundation.

Tonight (Tuesday, Nov. 29) through Friday, different places: Mike Doolin and David Martin “Dark Star” CD release. Have guitars, will travel. Portland, Oregon-based Doolin and Minneapolis-based Martin are zooming around the Twin Cities this week, playing tunes from their latest work of original modern jazz fusion. Tasty stuff. Tonight at the Black Dog (7:30 p.m., donation), Wednesday at Vieux Carré (8 p.m., $8 at the door), Thursday at the Driftwood (7 p.m., donation) and Friday at Jazz Central (8 p.m., $10 at the door/$5 student with ID). With Jim Chenoweth on bass, Pete Hennig on drums. 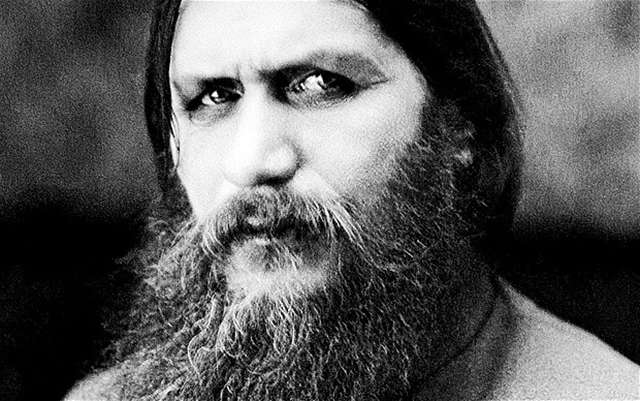 Courtesy of The Museum of Russian Art
Grigori Yefimovich Rasputin

Saturday at The Museum of Russian Art: “Rasputin: Revisited.” A UFO filmed hovering over St. Petersburg, Russia, in 2014 (and in the news again, for some reason) was labeled “the mad monk Rasputin” because 1) it looked like a monk and 2) 100 years after his death, we’re still fascinated by Rasputin, the Russian peasant who became the powerful mystical advisor to family of Czar Nicholas II. Award-winning historian Douglas Smith has written the definitive biography; Thursday’s Wall Street Journal review called it “scrupulous, insightful and thorough.” Smith will be at TMORA on Saturday, talking about his book with author Robert Alexander (“Rasputin’s Daughter”) in a discussion moderated by the Loft’s former director,  Jocey Hale. 6:30 p.m. FMI and tickets ($12-15).

At the Heights Theater: “White Christmas.” The classic Bing Crosby film, in Technicolor, on the big screen, preceded by a 20-minute performance by vocalist Connie Evingson with Rick Carlson on piano and a bouncing-ball sing-along, plus Harvey Gustafson at the keyboard of the Mighty Wurlitzer. Well, geez, no wonder this sells out every year. It did this year, too, but an extra performance was added – at 7 p.m. Thursday, Dec. 1 – and tickets might still be available to that. Find out here. $12.

At St. Olaf College in Northfield, and (new this year) streaming live: St. Olaf Christmas Festival: Light Dawns, Hope Blooms. One of the most eagerly anticipated, widely praised and hard to get into Christmas events of the year is held in Northfield, Minnesota, town of cows, colleges, and contentment. It’s a mighty sound, and thrilling: more than 500 student musicians, members of five choirs and the St. Olaf Orchestra, with audience sing-alongs. Tickets are still available for 7:30 p.m. Thursday night (Dec. 1), but Friday-Sunday are sold out. In Skoglund Center Auditorium. FMI and tickets ($25.50-$30). For the first time in the event’s 104-year history, you can order a live HD video stream of the afternoon concert on Sunday, Dec. 4 at 3 p.m. FMI and access ($14.99). You can also listen live for free on MPR at the same time. 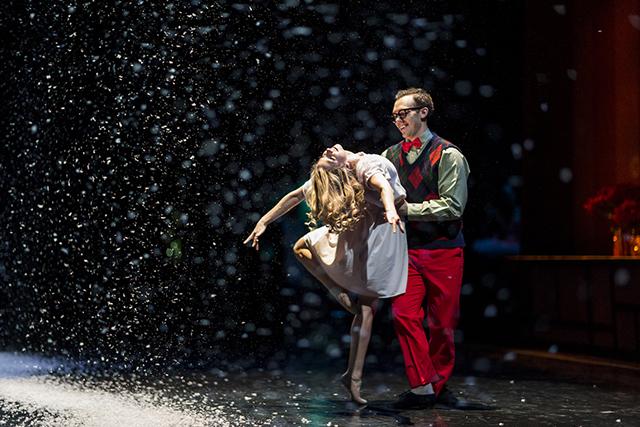 Courtesy of James Sewell Ballet
“Nutcracker (not so) Suite”

At the Cowles: Nutcracker (not so) Suite. A longtime Ballet of the Dolls holiday tradition has been rescued by James Sewell Ballet, freshened up by Dolls founder and artistic director Johnson (who was Sewell’s first dance teacher) and given a home at the Cowles. Set in 1960s New York, with new costumes, new choreography and an over-the-top, Broadway-style opening number, it has a beatnik vibe, life-size Barbie and Ken dolls and a soundtrack of Christmas carols, contemporary songs, hip-hop and R&B. Johnson and Sewell both perform in the show. Dec. 2-18, Thursdays-Saturdays at 7:30 p.m., Sundays at 2 p.m. FMI and tickets ($25-50). Naughty Nutcracker performances on Dec. 9, 10, 15 and 17; parental discretion.

At Lakes & Legends Brewing Company: Procraftinate: A Handmade Holiday Market for Last-Minute Shoppers. Not quite last minute, but close enough. Minneapolis Craft Market hosts a bunch of local makers in a 3,500-square-foot tap room where you can enjoy a Belgian-style beer while listening to music and buying cool things. It’s hardly even shopping, except for the paying part. And there’s a gift-wrapping station. Saturdays, Dec. 3, 10 and 17, noon-5 p.m.