Who doesn’t love looking at interior architecture and décor? There’s a reason why there are several home tours in the Twin Cities each year, from the Parade of Homes to the Bungalow Tour. We see an Open House sign and can’t resist stopping. We page through Architectural Digest and Dwell.

Leave it to the Walker to play on our predilections and throw in some twists. Opening to the Avant Garden crowd on Saturday and the public on Sunday, “Question the Wall Itself” features work by 23 artists from around the world who see interior spaces as opportunities to comment, critique, reference, replicate and repurpose. Taking over the Target, Friedman and Burnet galleries, it’s provocative, sometimes puzzling, frankly political, social and cultural. It plays on our dreams and fantasies by giving us spaces to walk into, around and through, peer inside and explore. Some of the installations are actual rooms, some allude to rooms and some redefine rooms.

It makes sense that this show is opening when the walls of the Walker itself are morphing. The bright, light-filled new HGA-designed entry/lobby facing the Minneapolis Sculpture Garden is nearly finished. What was formerly an uninviting passage from the parking ramp to the Bazinet Lobby is now a spacious promenade with large glass doors that slide open as you approach. From the doors, you can see the lobby; from the lobby, you can see the doors. The transformation is immense. Mark your calendar for the Open House Weekend on Dec. 1-4 and see for yourself.

In a media walk-through on Thursday, exhibition curator (and the Walker’s artistic director) Fionn Meade encouraged us to approach “Question the Wall Itself” as if we were stepping into a story, or a scene in a film or play.

One of the first pieces you see is American artist Tom Burr’s monumental “Zog (a series of setbacks).” If it looks familiar, it should; it’s Burr’s version of architect Philip Johnson’s zig-zagging “corner offices” in the IDS Center. The outside is a series of 12 glass-fronted “zogs” in which we see ourselves reflected. The inside features stainless-steel panels printed with photographic fragments showing the exterior of the Glass House, Johnson’s former private residence in Connecticut. Burr’s work is homage and critique tinged with voyeurism.

Central to “Question the Wall Itself” is Belgian artist and poet Marcel Broodthaers’ idea of “esprit décor,” the idea that interiors can be politically charged, constructed scenes that speak culturally and globally. His “Dites partout que je l’ai dit (Say Everywhere I Said So)” is an arrangement of a taxidermied parrot under a bell jar on a pedestal, a framed print of a parrot, a framed poem and an audio recording of Broodthaers reading the poem. Nearby, in German artist Rosemarie Trockel’s “As far as possible,” a bell jar covers a bell inside a cage of mechanical birds. Trockel’s installation is an actual room, low-ceilinged, its walls covered in pristine white ceramic tile. An examination room? A kitchen? A bathroom? A palm tree hangs upside-down from the ceiling. It’s not a comfortable space.

Three works by Chicago artist Theaster Gates meet in a single installation. “A Maimed King” is a makeshift memorial to Dr. Martin Luther King Jr.: an orange office chair facing a crumpled image of King inside a glass-front aluminum bulletin board, all salvaged from a condemned school on Chicago’s south side. Two slate panels labeled “House Nation Wall” and “Founders Plaque” allude to buildings and institutions yet to be built, and invite us to imagine a list of names that might appear on each. 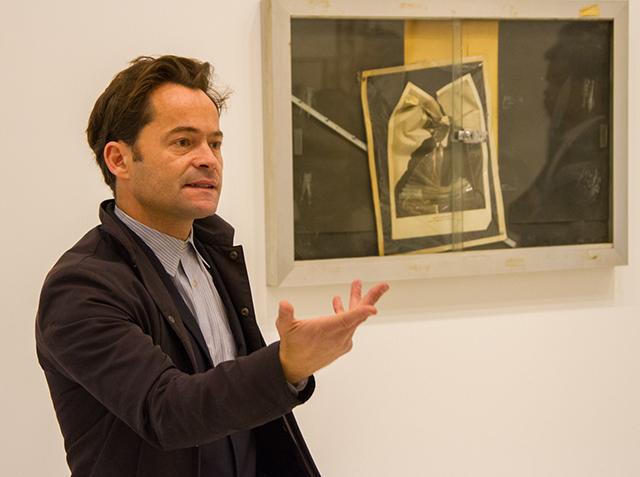 MinnPost photo by John Whiting
Walker curator Fionn Meade with Theaster Gates’ ‘A Maimed King’ at the Walker’s ‘Question the Wall Itself’ exhibition.

Especially fascinating are Lebanese artist Walid Raad’s “Letters to the Reader,” a series of 11 large-scale, painted and laser-cut wood panels representing fragments of walls in future art museums in the Middle East. (A Frank Gehry-designed Guggenheim Abu Dhabi is currently under development, and a Louvre Abu Dhabi is opening in 2017.) The bottom of each panel is trompe l’oeil wood or marquetry suggesting a floor. Above is a perforated outline of an ornate frame. From the text Raad wrote to accompany the installation: “While visiting the recently opened Museum of Modern Arab Art in Beirut, I noticed with great surprise that most paintings on display had no shadows.”

“Question the Wall Itself” includes many site-specific installations and new commissions. In her opening remarks on Thursday, the Walker’s executive director Olga Viso characterized it as the sort of show the Walker does every 3–5 years, one that takes the pulse of art in a contemporary moment from a global perspective. It’s Fionn Meade’s biggest show at the Walker since coming here in early 2014. Ends May 21, 2017.

Tonight (Friday, Nov. 18) at St. Thomas More Catholic Church: The Oratorio Society: “Greater Love: In Search of the Hidden Road.” The Oratorio Society starts its 37th season with Benjamin Britten’s “Cantata misericordium” based on the parable of the Good Samaritan; his operatic “Saint Nicolas,” cantata, about the fourth-century saint; and selections from Howard Goodall’s “The Beatitudes” including “Pro Eis Solitariis” (For Those That Are Lonely) and “Pro Eis Sine Domo” (For the Stateless). Matthew Mehaffey conducts. FMI and tickets ($35/$25/$15).

Sunday at Northern Clay Center: Opening reception for “John Reeve: Some Hidden Magic.” Like Stillwater’s Warren MacKenzie, Canadian potter John Reeve (1929-2012) studied with Bernard Leach in England, where (according to an exhibition catalog) “apprentices learned to eliminate all unnecessary gestures by throwing one hundred pots a day.” Reeve visited MacKenzie often, making pots, selling pots and teaching at the University of Minnesota. For this show, curator Nora Vaillant has gathered highlights from Reeve’s work in stoneware, porcelain and earthenware spanning his 50-year career. Many pots are borrowed from local collections and the Weisman Museum. 12 noon – 4 p.m. Curator-led slide talk and gallery conversation at 1 p.m. The show stays up through Dec. 29. Simultaneous with the Reeve reception, NCC will host a holiday open house, exhibition and sale with work by more than 80 NCC artists and guest artists. So you could do some holiday shopping, too.

Courtesy of the artist
Jonatha Brooke

Monday at the Dakota: Jonatha Brooke. In the early 2010s, folk/pop singer/songwriter Jonatha Brooke took a break from touring and recording (she’d made 10 albums by then, along with writing for three Disney films and several TV shows) to care for her mother, who was suffering from Alzheimer’s disease. She wrote a play with music based on that experience, performed it to sold-out houses at the Playwrights’ Center, took it to the Guthrie’s Dowling Studio and then to New York, where it was a New York Times Critics’ Pick. She recently released a new album of original songs, “Midnight Hallelujah,” and she’ll bring her literate, emotional, courageous storytelling self to the Dakota on Monday. 7 p.m. FMI and tickets ($30-35).

Saturday at The Museum of Russian Art: Opening Reception for “Winter Holidays in Russia.” Over 200 holiday ornaments, greeting cards, posters, paintings, gift boxes, and Grandfather Frost figurines tell the story of Russia’s holiday traditions from the late Imperial period to the present day. Russian tea, cider, and cookies will be served. 5:30-7 p.m. Free, but register here. The show stays up through Sunday, Jan. 22.

A fourth Jerry Seinfeld show at the Orpheum has been added, since the first three sold like sugary breakfast cereals used to. A 9:30 p.m. show on Jan. 19 goes on sale today at 10 a.m. FMI and tickets ($50-150). Buy in person at the State Theatre box office, save on fees.

‘Question the Wall Itself’ to open at the Walker; Jonatha Brooke at the Dakota