Next Tuesday, when people in the city of Minneapolis go to vote, they’ll be guided by signage created by student designers at MCAD DesignWorks, the in-house design studio at the Minneapolis College of Art and Design.

Some voters have already seen it in the primaries and during early voting. Clean, clear, modular and flexible, the signage system has been translated into Hmong, Somali and Spanish.

The new system got its start in 2012, when MCAD first served as a polling place for the Whittier neighborhood, one of the city’s most diverse. Kate Mohn, who worked for the Minnesota secretary of state’s office before moving to MCAD in 2010, noticed that the directional and informational signage needed improvement. She asked DesignWorks to create signage for use at MCAD during the 2014 election.

Liking what they saw, the City of Minneapolis Elections and Voter Services Division hired DesignWorks to create better signage for all 125 polling places in the city. This required working with the secretary of state’s office and the Minneapolis Elections and Voter Services office, following local, state and federal guidelines and complying with various rules, statutes and laws.

The system includes “Vote Here” signs and instructional signage on topics including how to mark a ballot, how to use the ballot counter, and what not to do in the polling place. The modified stars-and-bars graphics and color palate – red, white, blue and orange – is attention-getting but not shouty, and the font is clean and readable. In creating the new system, the student designers followed best practices developed by the American Institute of Graphic Arts (AIGA) through its Design for Democracy project.

“We’re really excited to be launching this,” City of Minneapolis election administrator Tim Schwarz told MinnPost. “The new design replaces what was sort of a hodgepodge – an array of signs in different fonts and colors. This brings it all together into a uniform look and hopefully makes it a more usable resource for voters and judges. We’re still doing some tweaking, based on comments from election judges and the public. The hope down the road is to offer [the signage] to other jurisdictions under a creative commons license.” Maybe someday we’ll see the signage all across Minnesota.

MCAD DesignWorks gives students client-based experiences in a professional creative environment. “As an educational institution, we’re very excited to have an impact on the improved voter signage system,” MCAD president Jay Coogan said in a statement. For MCAD students, this was “a very timely and meaningful project.”

Thursday at the U’s Continuing Education and Conference Center: Headliners: “Beyond Cecil: Lions, Conservation, and Controversy.” As the human population keeps growing, humans and lions are crowded closer together, which isn’t good for them or us. Craig Packer, director of the U’s Lion Center and the world’s leading expert on the endangered African lion (yes, right here in Minnesota), presents findings from his decades of research and radical new approaches for conserving the Cecils of the world and the last great wildlife refuges in Africa. On the St. Paul campus. 7 p.m. FMI and registration ($20).

Thursday at the Guthrie: Book Launch: TULA by Chris Santiago. A Bloomington native and the son of Filipino immigrants, Santiago is the winner of the 2016 Lindquist & Vennum Prize for Poetry. Now in its fifth year, the prize carries a $10,000 award and a publishing contract from Milkweed Editions. Santiago’s debut collection, TULA features poems about language, family and the immigrant experience. A reception will be followed by a reading and a conversation between Santiago and contest judge A. Van Jordan. In the Level 9 lobby. 6 p.m. reception, 6:30 program. Free, but please register. 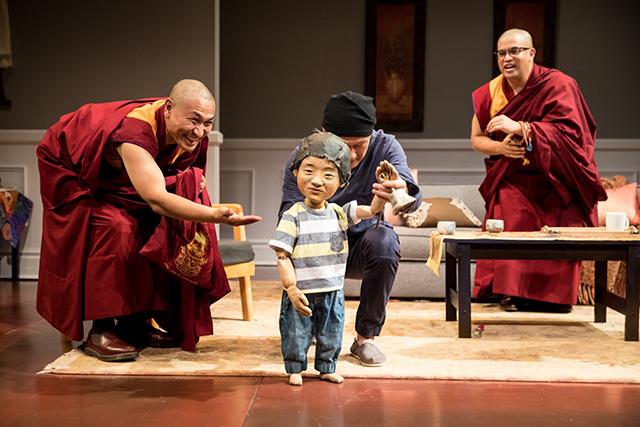 Opens Friday at the Jungle: “The Oldest Boy.” Sarah Rasmussen directs the Midwest premiere of Sarah Ruhl’s play that, on the surface, sounds a lot like Bernado Bertolucci’s film “Little Buddha.” When a young American boy is identified as the reincarnation of a high Buddhist lama, a Tibetan monk and lama show up at the family’s door and ask to take the child away to India for training. This time the story is told by MacArthur fellow, Tony nominee and two-time Pulitzer finalist Ruhl – the same Ruhl who wrote “In the Next Room (or The Vibrator Play),” also directed here by Rasmussen – and the child is played by a puppet. The cast includes two Tibetans, Tsering Dorjee Bawa, who has been involved with “The Oldest Boy” since its original production at Lincoln Center, and Yeshi Samdup, who dances and performs live music. Christina Baldwin is the mother, Randy Reyes the father, Bawa the monk, Eric “Pogi” Sumangil the lama, and Masanari Kawahara the puppet designer, creator and puppeteer. This is a far cry from “The Vibrator Play” but we’re intrigued by the play Rasmussen has chosen to end her first season as the Jungle’s artistic director. FMI and tickets ($30-$48). Run time about 2 hrs., including a 15-min. intermission. Ends Dec. 18.

Saturday at the Calhoun Arts Building in Minneapolis: 2nd Annual “An Ode to Navarathri.” An annual Indian festival comes to Minnesota, home to many Indian immigrants – and the internationally known Ragamala Dance, which hosted the inaugural event last year at St. Paul’s Landmark Center. Navarathri is a time when families welcome neighbors into their homes for a celebration rooted in the sharing of art. We went last year, saw some wonderful performances and just hung out. Ragamala’s studios are in the Calhoun Arts Building, where other artists and businesses will also take part. As you wander from place to place, you might catch a few moments of a rehearsal for Ragamala’s new “Written in Water,” which comes to the Cowles in January. Includes demonstrations and food tastings. 711 W. Lake St., Minneapolis. Noon-6 p.m. Free.

Voter signage comes from MCAD student designers; ‘Beyond Cecil’ talk at the U