Some arts trends we noticed while looking back at 2016, and some things we can probably expect in 2017 and beyond:

The St. Paul Chamber Orchestra’s ticket prices were already low when it decided, what the heck, let’s just give tickets away. Since September, kids 6-17 and students with valid ID get in free. At the Guthrie, tickets to events in the Dowling Studio on the ninth floor fell to $9, and two shows were offered free of charge. The Minnesota Orchestra continued its “$20under40” initiative, which offers anyone 40 and under two $20 tickets to select concerts. And let’s not forget that Mixed Blood Theatre has given away tickets for years under its Radical Hospitality program.

2. A lobby you want to spend time in

It’s premature to call this a trend, because it has only happened in one place so far, but when the Walker Art Center opened its new $23 million main entrance earlier this month, it included a lobby where people can actually hang out and get comfortable, with long, low sofas and several boulder-shaped poufs for sitting. Come summer, it will be a room with a view of the new Minneapolis Sculpture Garden. Now, can we maybe goose the Guthrie’s first-floor lobby, and the lobby of the Cowles Center?

3. Classical music on the move

Classical musicians kept showing up in non-concert-hall rooms like Icehouse, Aria, TPT’s Street Space, the Turnblad Mansion and even the Turf Club. The SPCO scheduled a mini-series of three Icehouse concerts for 2016-17 and Accordo will return there in March. The Minnesota Orchestra’s “Symphony and Suds” series has a new name, “Pint of Music,” and starting in January its musicians will perform a series of free micro-concerts at brewpubs around the cities. Guitarist Eva Beneke’s Lowertown Classics series continues its concerts in the lofts of Lowertown, and Punk-Ass Classical performs in people’s basements, attics and living rooms. P-AC recently completed a successful crowdfunding campaign that will guarantee its musicians a $65 base rate plus donations from the door.

Composers, musicians, dancers, filmmakers, theater artists and visual artists are coming together in collectives, collaborations, series and other arrangements, some formal, some loose. What they have in common is organizing around wanting to do their own thing, in their own time and way, in places of their choosing.

Several have education and outreach as elements of their mission, when they articulate a mission. Examples are the 113 Composers Collective, a collection of composers and performers of new music; Spitting Image Collective, a trio of composers; and Six Families, a “fluid sound-making collective” that includes composers, musicians, vocalists, improvisers, sound artists and performers. Six Families recently signed up to curate at Khyber Pass Café, where some of the most adventurous improvised live music anywhere happens every Thursday at 9 p.m. We spoke with composer and sound artist Patrick Marschke, who’s part of Six Families, who said, “We’re a group of artists trying to create space for ourselves, rather than depending on previous models – not because we don’t appreciate or respect the old models, but because it’s fun to start from scratch and build it yourself.” He threw out a few more names to stay alert for: the dance groups DaNCEBUMS and Hiponymous, the Minneapolis-based gallery Yeah Maybe, and Ars Electroacoustica, a series that combines electro-acoustic music with avant-improv.

Most people know not to talk during concerts at places like Orchestra Hall and the Ordway. But what about clubs with live music? That’s not so clear. People who pay for a ticket expecting to listen get mad when others talk. Those who pay for a night out expecting to socialize get mad when others tell them to shut up. Lately some clubs are stepping up and saying, “This is how we would like you to behave in this place at this time.” 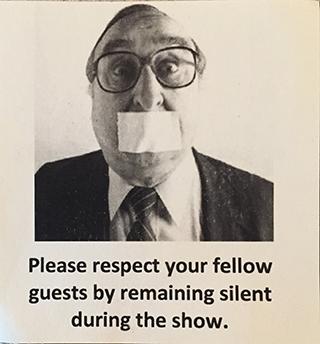 Crooners in Fridley has made its Steinway-equipped Dunsmore Room a listening room. Most events are introduced by owner Mary Tjosvold, who spells that out with a welcoming smile. After an incident at Icehouse in late October, when an audience member heckled drummer Dave King during a show, a small sign started appearing at the entrance for some events, along with cards on the tables. A humorous B&W photo shows a surprised-looking older guy with oversized glasses and a big piece of tape over his mouth. Printed below are these words: “Please respect your fellow guests by remaining silent during the show.” At a sold-out, mostly standing Happy Apple show in late November, we could hear every note Mike Lewis played on his saxophones, even the ones where he barely breathed.

Under new artistic director Sarah Rasmussen, the Jungle Theater staged its first-ever play written by a black man (Idris Goodwin), with a black director (Marion McClinton) and two black leads (Ansa Akyea and Darius Dotch). “Bars and Measures” wasn’t a great play, but it was an important step in a new direction. The Guthrie and its programming became more diverse the moment Palestinian-American Artistic Director Joe Haj walked through the door. And the SPCO’s new strategic imperatives include developing a more racially and ethnically diverse audience and “SPCO family.”

If you’re not on Facebook, there are many events you won’t hear about until it’s too late, or ever, unless friends clue you in. Which is fine if you’re on Facebook 24/7 but not so great if, for example, you’re an arts writer who wants to know about your event but can’t check Facebook every few seconds. Just saying that for some of us, email is still the best way to let us know what you’re up to.

Expect a whole lot of uncertainty, and probably some of the best art we’ll ever experience. Back in August, which seems like forever ago, the Washington Post asked, “Would Donald Trump make art great again?” We all know that’s about as likely as another moon landing anytime soon. No matter who is appointed head of the National Endowment for the Arts, the NEA plug could well be pulled. That will hurt arts organizations everywhere, including many in Minnesota, which just last week received $1.3 million in NEA funding. Budgets will be cut, jobs lost and programming affected.

Closer to home, changes in the Minnesota Legislature might well affect the flow of Legacy dollars to the arts. Meanwhile – and here’s a bright spot – our local artists will have plenty to say, starting with the poets. Poetry will become more powerful, visual arts more pointed and live performances more outspoken, like the recent Choreographers’ Evening at the Walker, curated by Rosy Simas.

Art matters; it has always mattered, and it’s going to matter even more. We’re lucky to live in such a strong and vibrant arts community. Let’s make sure to support it in whatever ways we can.