When Joseph Haj became the Guthrie’s eighth artistic director in July 2015, the Rodgers & Hammerstein musical “South Pacific” was already in the theater’s 2015-16 season. His predecessor, Joe Dowling, had picked it. Not only did Haj leave it in, he made himself the director. The summer hit became the highest-grossing production in the theater’s 53-year history. It was Dowling’s baton, but Haj carried it over the finish line.

The “South Pacific” success was one of many upbeat items at the Guthrie’s annual meeting Monday, held against the backdrop of the towering set for “The Lion in Winter.” Haj couldn’t be there – he was called to Miami for a family emergency – so newly re-elected Board Chair Marc Belton, Managing Director Jennifer Bielstein and Associate Artistic Director Jeffrey Meanza took turns walking us through the year.

Total attendance – including single and season tickets, discounted student and educator tickets, free and subsidized tickets, and other programing – was 380,108. Of all tickets sold or distributed, 24 percent were provided to students, teachers and other community members free of charge or at an average price of less than $10 per ticket. The number of subscribers dipped slightly to 19,200 from last year’s 19,277. The number of donors rose from 4,154 to 4,793.

There was money to spend on nearly $1 million in improvements and fixes to the Guthrie’s physical plant and equipment, including the replacement of some things brought over from the former Guthrie on Vineland Place. (Believe it or don’t, the “new” Guthrie is 10 years old.) Thanks to an unnamed donor, the debt on Big Blue fell from $14.6 million to $6.55 million.

Numbers aside, we’ve heard a lot of talk – maybe you have, too – about how the Guthrie is changing under its new leadership. Even in a transition year (or “hybrid year,” in Meanza’s words), things felt different. While “South Pacific” sang and danced on the thrust stage, Haj put Pulitzer Prize winner “Disgraced” on the proscenium, a play about Islamophobia, identity, prejudice and terrorism. For “Trouble in Mind,” a 60-year-old play by a black woman about a racially mixed theater troupe, he tapped Valerie Curtis-Newton to direct, the first black woman to lead a play on a Guthrie main stage. “Trouble” won an Ivey Award.

Most plays at the Guthrie have a planning cycle of 12-18 months; Haj experimented with “happenings” in the Dowling on the Guthrie’s ninth floor, events meant as responses to what’s going on here and in the world. Presentations of Carlyle Brown’s “Acting Black” and Mike Daisey’s “The Trump Card” (in Sept. 2016) were pulled together in a matter of weeks, and both were offered free of charge.

The ninth floor – the Guthrie is calling it Level Nine – is seeing more focused, pertinent and thought-provoking activity, thanks to a three-year, $1 million Mellon Foundation grant announced in April. Ticket prices to all performances are now $9. A director of community engagement has been hired; Carra Martinez’s job is to connect with Twin Cities residents who are not currently being served. A slate of timely plays is under way, with audience engagement events. More and more, the Guthrie wants audiences to hang around and talk. Some 40 percent of people who saw “Disgraced” stayed for the post-show conversations.

Reached earlier Monday by phone, Bielstein reflected on 2016 (she arrived here in January) and contemplated the challenges ahead. “The Guthrie is a strong organization,” she said. “It has been very smart and strategic and disciplined for decades, to great results: great audience numbers, impact numbers, and financial results. We’re in a strategic planning process now to identify a bold vision going forward.” She referenced the four core values Haj identified three months into his new job: artistic excellence; community; equity, diversity and inclusion (“EDI”); fiscal responsibility. “We really want to engage the community in the work that we do, be responsive to community needs and broaden our audiences,” she said. “I think our biggest challenges are in that arena: to meaningfully broaden and diversify our audiences over time.”

Coming in 2017: a revamped website (at last!) and a refresh of the Guthrie brand. (Minneapolis-based Little & Company is working on that now.) Meanwhile, the theater is adjusting to the presence of a hulking new neighbor. The U.S. Bank Stadium is mere blocks away, and the Guthrie is tweaking its schedule around some key Vikings games. 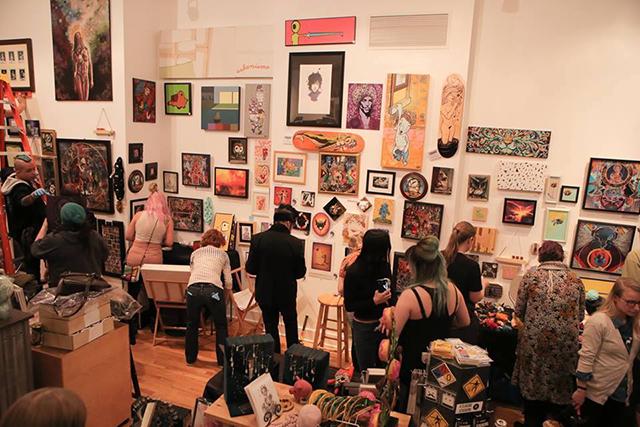 Courtesy of Gamut Gallery
A past Raging Art On

Thursday at a movie bigaplex near you: “Spirited Away.” Hayao Miyazaki’s wildly imaginative, gorgeous, richly detailed Oscar-winning animated masterpiece is Japan’s highest-grossing movie ever. He made it for 10-year-old girls, which doesn’t mean it’s childish or silly. This is the film’s 15th anniversary. Dubbed in English. 7 p.m. FMI and theater finder (click “Buy Tickets,” then enter your ZIP). Ticket prices vary. On a Miyazaki tear? “Princess Mononoke” is coming Jan. 5 and 9.

Thursday through Saturday: The St. Paul Chamber Orchestra: Bach’s “Brandenburg” Concertos. The SPCO has made a lovely tradition of presenting these diverse, buoyant, and utterly non-holiday-specific concertos as holiday fare. Bach wrote them during one of the happiest, most productive times of his life, and it shows. Thursday: 7:30 p.m. at Temple Israel. Friday and Saturday: 8 p.m. at the Ordway Concert Hall. FMI and tickets ($13-53). 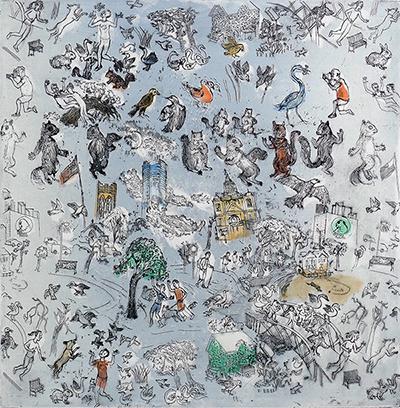 Courtesy of Highpoint Center for Printmaking
James Boyd Brent, ‘Animals in the City,’ intaglio and monoprint, 2016

Friday at Highpoint Center for Printmaking: “Prints on Ice: The 30th Cooperative Exhibition.” The annual winter show of prints by members of Highpoint’s studio cooperative features work by 35 local printmakers. It’s always an excellent overview of work being done around us, and the opening reception is also a 20 percent off sale, so there’s that. 6:30-9 p.m. FMI. Ends Jan. 21.

Friday at the Bell Museum: Bell Social with Har Mar Superstar. For its final (sniff, sniff) Bell Social at the Minneapolis location, the Bell Museum is going all out with a museum-wide show of works by former resident artists including Sonja Peterson, Sreekishen Nair and Carl Flink of Black Label Movement dance theater; a mini-Café Scientifique with U of M plant biologist and Bell curator Dr. George Weiblen (topic: “The Ethnopharmacology of Energy Drinks”), free planetarium shows, DIY art-making, and live music from Har Mar Superstar. 7-11 p.m. FMI and tickets ($10/$15). The Bell closes on the Minneapolis campus on Dec. 31; the new Bell Museum + Planetarium opens on the St. Paul campus in 2018.

Friday and Saturday at the Basilica: National Lutheran Choir Christmas Festival: “Angels Hovering Round.” This year’s message: “Have no fear.” Kevin Siegfried’s “Angels Hovering Round” is the centerpiece of the concert, a story told in poetry, choral music, and carols sung by all. Friday 4:30 and 8 p.m., Saturday 8 p.m. FMI and tickets ($28/$25/$10).