Within the past 30 days, the Metropolitan Regional Arts Council (MRAC) has awarded nearly $800,000 in grants to Minnesota organizations and projects in two grant programs.

Announced Dec. 13, $324,927 in Community Arts Grants went to 69 organizations and projects demonstrating “both strong artistic quality and a connection to the community. The Community Arts program uses a block grant system so funds are distributed broadly in the seven counties of MRAC’s service area. Grants ranged from $1,820 to $5,000, with all but a few grantees awarded the maximum.

In Anoka County, grants will be used to support Project Power, which provides music and drama experiences for adults with special needs; a performance of “Carmina Burana” by Chorus Polaris; the 10th annual Blaine World Fest; and a free concert by the Mississippi Valley Orchestra. Washington County’s grants will fund an original new community theater musical production at the Arts Garden in Hugo, a five-month curated film series, five concerts at the Washington County Historic Courthouse, the 2017 Square Lake Film & Music Festival and a program called StoryArk, where students in grades 6-12 produce an original radio drama for a podcast series. This is the first round of MRAC’s FY 2017 Community Arts grant program.

In FY 2016, MRAC awarded 467 grants totaling $3,146,433 to organizations. Grants were funded by an appropriation from the Minnesota State Legislature with money from the state’s general fund, and by Legacy Fund dollars. An additional $174,666 in grants to individual artists was funded by a grant from the McKnight Foundation.

Previous Backyard Bashes have funneled more than $50,000 in donations to the MMC. Founded in 2011, the organization has served over 12,000 Minnesota artists. In 2016, it paid almost $60,000 to musicians through grants and performance fees. Throughout the year, musicians look to MMC for workshops, mentoring, free legal help, industry networking and performance opportunities.

Tonight (Tuesday, Dec. 20) at the University Club of St. Paul: Carol Connolly’s Reading by Writers. Wrap up the new year with readings by four writers with new books, all available for last-minute holiday shopping. Margaret Hasse will read from “Between Us,” her fifth collection of poems; Tim Nolan will read from “The Field,” his third; Juliet Patterson from her latest, “Threnody.” And novelist Peter Geye will dip into “Wintering,” his third novel. The readings will be followed by a salon discussion and Q&A. Bring cash or checks if you want to buy books directly from the artists. 7:30 p.m. Free and open to the public, with a hat passed to benefit the Saint Paul Almanac.

Wednesday at the American Swedish Institute: Winter Solstice Celebration. We all know what the Winter Solstice means: The days will start getting longer again. Especially after the weekend’s arctic blast, we are soooo grateful for that. It’s a good excuse to visit ASI, where the winter courtyard will be lit with bonfires, the castle’s holiday rooms will be open and sparkly, and FIKA will be serving glögg. Entertainment includes performances by the Swedish group Nyckleharpalag and the theater group Impossible Salt. 5-8 p.m. Admission at the door ($10 adults, $7 seniors, $5 ages 6-18 and students with ID; free for under 6 and ASI members).

Thursday and Friday, Sunday and Monday at the Dakota: The Bad Plus. Each year for several years, bassist Reid Anderson, pianist Ethan Iverson and drummer Dave King have known where they’ll spend the holidays. The leaderless jazz trio will start with a Christmas residency at the Dakota, then head to New York City for a New Year’s residency at the Village Vanguard. Their latest album, “It’s Hard,” is a collection of other people’s songs – other people including Prince, Johnny Cash, Barry Manilow, Cyndi Lauper, Peter Gabriel and Ornette Coleman – turned inside-out and upside-down, retooled, refueled and pushed back into the world. It would be kind of them to play the Prince cover, “The Beautiful Ones,” since this is Minnesota, but it’s not a given. Sets at 7 and 9 p.m. all four nights. FMI and tickets ($40/45).

Photo by Josh Goleman
The Bad Plus

Thursday (Dec. 22) through Jan. 1 at the Lab Theater: “Visions of Sugarplums: A Burlesque Nutcracker.” Most holiday entertainments are serious, even reverent affairs. Not that there’s anything wrong with that, but sometimes you want to throw up your hands, shout “Enough!” and see something completely different. Like, for example, fabulous costumes, saucy aerial arts, campy humor and bawdy takes on holiday songs. Developed by director Lily Verlaine, with Nadine Dubois as host, dancer and actress, “A Burlesque Nutcracker” was born in Seattle and spent two years at the Ritz before moving to the Lab for its third Twin Cities season. FMI and tickets ($35-$50 VIP). For grown-ups.

Opens Friday (Dec. 23) at the Film Society’s St. Anthony Main Theatre: “The Eagle Huntress.” Thirteen-year-old Aisholopan wants to be an eagle hunter. Except she’s a girl, and this is a traditionally male role in her nomadic, patriarchal Kazakh family and community. Otto Bell’s documentary is a nature film, travel film, feel-good story and feminist epic. FMI including times, trailer and tickets.

Love the new “Sherlock” with Benedict Cumberbatch? Season 4 premieres on Sunday, Jan. 1, and on Sunday, Jan. 8, TPT will host a pair of viewing parties, both with a cash bar, photo booth, trivia, prizes, popcorn and more. Choose “Adventure One,” with episodes 1 and 2 of Season 4 (6 p.m., doors at 5), or “Adventure Two,” the premiere of episode 2 as it airs on TPT and nationally (8 p.m. doors at 7). Free and open to the public, but RSVPs are required. 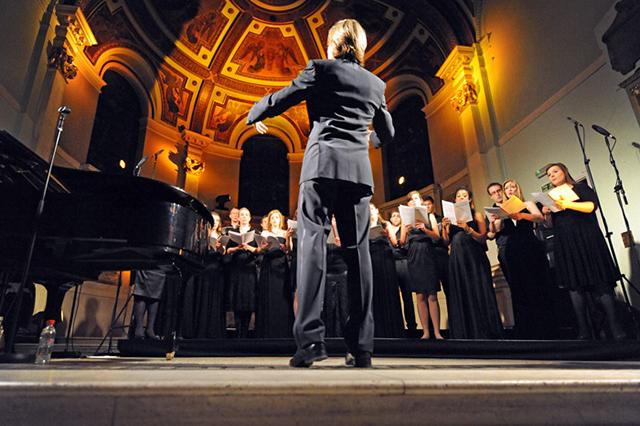 Courtesy of the artists
The Eric Whitacre Singers

The Eric Whitacre Singers will make their Minnesota debut at the Cathedral of St. Paul on Friday, March 9. The popular and charismatic Whitacre will be here to lead his Grammy-winning ensemble, and it’s such a big deal that MPR held a presale for its members earlier this month. The professional choir reaches and pleases all kinds of audience; their repertoire ranges from Monteverdi to Depeche Mode. Choral music and Eric Whitacre fans, jump on this. 7:30 p.m. FMI and tickets ($35-55).