A new exhibition at the Weisman, “The Beautiful Brain,” explores the relationship between art and science. It’s about the brain, but it’s also about the art of portraying what the brain looks like and how it functions. At its heart is a collection of 80 intricate pen-and-ink drawings of brain cells – neurons and glia – by the Spanish neuroanatomist and Nobel Prize winner Santiago Ramón y Cajal (1852-1934). Some look like trees or groves of trees, others like spider webs and botanical art. There’s a cell that resembles a swimming penguin, and one with a face. Some sprout thorns like roses.

Cajal is considered the father of neuroscience, and his drawings are Spanish national treasures. “The Beautiful Brain” is the first museum exhibition to present, interpret and contextualize them. It’s the first time most of the drawings have been seen in the U.S. and the first time so many have been allowed to leave their home at the Instituto Cajal in Madrid. WAM is showing them with a selection of historic books, scientific tools and contemporary images of the brain, some as fantastic and colorful as Hubble Space Telescope images.

Born in a village in northeastern Spain, Cajal fell in love with drawing as a child, and he wanted to be an artist. His father, the village doctor, wanted him to be a doctor. As a young man, Cajal made anatomical drawings the elder Cajal could use to teach human anatomy. He graduated from medical school, became a professor and taught himself histology, the study of cells and tissues under a microscope. He made thousands of precise drawings of what he saw. From these, he made discoveries and formed theories about how information travels within the brain and what brain cells do. At a time when most scientists believed that the brain was a single, interconnected network, Cajal showed that it is made up of individual cells. (You scientists out there know this as the Neuron Doctrine.) Half a century later, electron microscopy proved him right.

Cajal’s drawings are still used as teaching tools, though not as much as they once were. Eric Newman, a Distinguished McKnight University Professor and one of three University of Minnesota neuroscientists who collaborated with WAM on the exhibition, remembers buying one of Cajal’s books as soon as it came out in translation, when Newman was an undergrad. A Cajal drawing of retinal cells – the retina is Newman’s specialty – has hung in his office at the U for 15 years.

As befits an important (and smart) show like “The Beautiful Brain,” which will travel to several universities and museums after its WAM debut, Abrams has published a scrumptious oversized art book about it. Essays about Cajal and contemporary brain imagery by Alfonso Araque, Janet M. Dubinsky, Larry W. Swanson, WAM director Lyndel King and Abrams editor-in-chief Eric Himmel frame an extensive center section that pairs Cajal’s drawings with descriptive notes by Newman. The notes are a book-within-a-book, a mini-course on the brain and how it works.

We spoke with Newman Thursday about the book, the exhibition and, why not, glial cells. 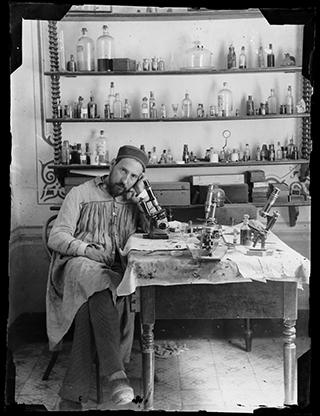 MinnPost: You usually write for scientific journals. How was this different?

Eric Newman: It was actually a lot of fun. I had a great time doing it, so much so that I kind of wanted to do a second book after I finished this.

MP: What were some of the choices you made while you were writing?

EN: We’re aiming it to be interesting to a scientific audience, but also accessible to the general public. We didn’t want to use too many technical terms. At the same time, we needed to use some. There were a few key words that have to be used because you can’t explain anything without them. At the beginning of the book and the exhibit, there’s a short paragraph explaining what those terms mean. There was also a decision to use some of the technical terms for different regions of the brain because the drawings wouldn’t make sense to scientists if we didn’t use those names.

I wanted to try to tell a story, so people would understand how the brain works in general. So we introduce a lot of important concepts and actually discuss them many times, like the Neuron Doctrine and the concept of the direction of flow of information. We talk about how the visual system is organized. I wrote the captions hoping people would read them in a sequence from start to finish, as a story of how different pathways in the brain function.

MP: How did you know what was happening in the drawings?

EN: The retina drawings were easy. I knew all of those. There are some we had no idea what they were, and for those we had to go back to his original publications. He published his own journal for 30 years, and fortunately the biomedical library here at the U has the complete collection. Many of the drawings we found in his published books as well. But we did have to do a fair amount of research.

MP: When you first saw Cajal’s drawings as a student, did you think of them as art?

EN: They were beautiful drawings, and they illustrated things that nobody else has illustrated. But I probably didn’t think in those terms before we started putting the show together. I have a much better appreciation of his artistic talents from working on the show.

MP: How did this exhibition come about?

EN: [Neuroscientist] Alfonso Araque, who we recruited here four years ago, was working at the Cajal Institute. I probably suggested to him, or asked him, if we could bring the drawings over. Together we met with Lyndel King, and she liked the idea. Originally it was going to be a smaller exhibit, but then the idea grew in her and she decided to make it a full-blown show. As it was forming, we had the idea of including some contemporary images. Jan Dubinsky, the third neuroscientist organizer, has been in charge of those.

MP: Have Cajal’s drawings influenced you personally in any way?

EN: Certainly, as my work has progressed, his drawings have stayed with me. I’ve done a lot of work on the retina, and he has by far the most beautiful drawings of the retina. I keep his work in mind when I’m thinking about my own research, because it illustrates the anatomy so beautifully. My other focus is glial cells, and he has also done beautiful drawings of glial cells. All of the senior people in glial research, without exception, always show one of Cajal’s drawings when they give a scientific presentation. His drawings are always in my mind or in my eye.

As I’ve been doing research for the show and the book, I’ve discovered that Cajal suggested for glial cells many of the functions we now know are correct. Over the past 80 years or so, neuroscientists have largely ignored glial cells. They thought they were just housekeeping cells that didn’t do anything interesting. We’ve learned in the last 25 years that glial cells have many important functions. They interact with neurons and influence neuronal activity, and they contribute to the processes and mechanisms that are responsible for learning and memory. Going back through Cajal’s writing, I found that he suggested many of these functions that were not really thought of again for 50, 60, 70 years.

MP: If you could ask him one question, what would that be?

EN: The amazing thing about Cajal was all of his work and all of his deductions about the function of the brain were based just on anatomy. He knew that the brain was composed of individual cells, and he’d figured out how information flowed through the cells, based just on anatomy. So I guess I’d ask him how he figured out all these functions of the brain, and maybe ask him in more detail what his ideas about these hypotheses were.

I’d probably ask him about photography as well, and how he composed his self-portraits, because they really are beautiful photographs.

In Sunday’s new episode of “MN Original,” photographer Eric William Carroll, who thinks that making photographs today is way too easy, shows us how he makes it harder on himself. Sometimes he doesn’t even use a camera. This segment is a peek into several of Carroll’s labor-intensive science/art projects, including one involving dominos, dice, Rubik’s cubes, and old scientific images made in something called a bubble chamber.

As a child, Michael Hall wanted to be a writer, but he was dyslexic. When he couldn’t keep up with his English classes in college, he switched to the sciences, then discovered graphic design. After 30 years as a graphic designer, he’s doing what he wanted from the start: writing and illustrating books for children, including the New York Times best-seller “My Heart Is Like a Zoo.”

The young men of the Hmong Breakers Leadership Council (HBLC) are working to bring diverse, multigenerational communities together through break dancing. You might have to watch this twice – once with your eyes closed, so you can fully hear what they’re saying without being distracted by their moves.

And, in a musical interlude, vocalist and songwriter Aby Wolf sings an ethereal version of her song, “Alone,” in an old elevator shaft. 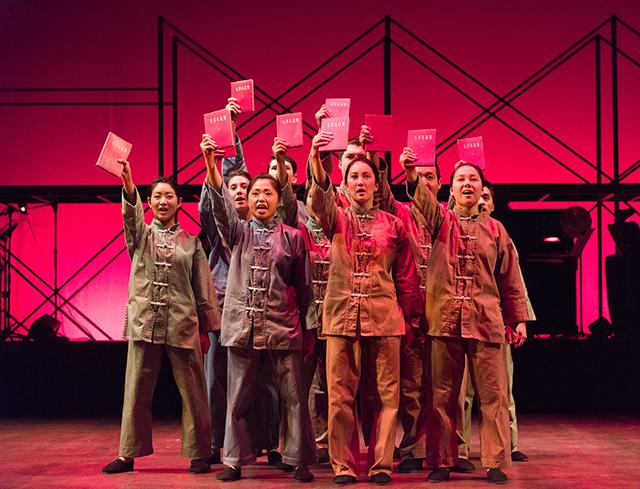 Friday through Sunday at the Walker: “Notes on Blindness.” A film about going blind in one’s forties has been hailed as a “magnificent documentary” that “never lapses into self-pity or relies on mystical platitudes.” Showings at 7:30 p.m. and 2 p.m. FMI and tickets ($10).

Saturday at Public Functionary: “Wintertide 2017: A Biennial Juried Art Exhibition.” Work by 29 Northeast Minneapolis Arts Association (NEMAA) artists will be shown, winners will be announced and $12,500 in cash prizes will be awarded. The artworks will be for sale. FMI. Free and open to the public. 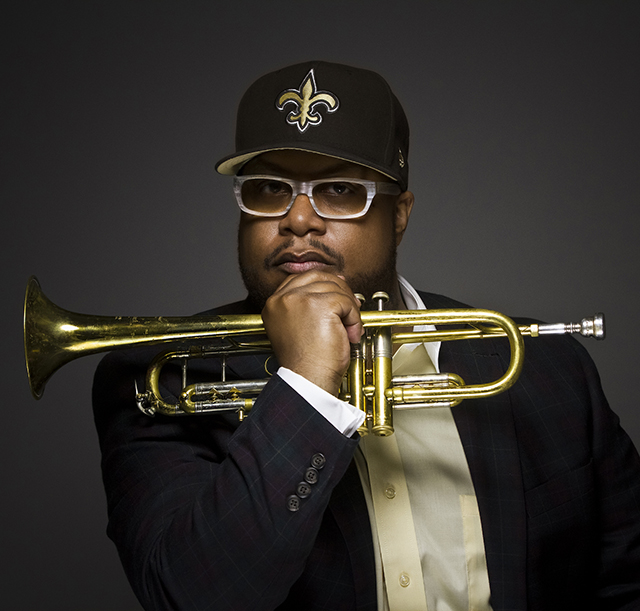