What’s one way to present new music – aka modern music, contemporary classical music, and classical music by someone who isn’t dead – to classical concertgoers? Because they’re not always eager to hear it. Which presents challenges to composers who write it, musicians who perform it, and music itself, which must change and evolve to stay alive.

This weekend, we’ll hear a brand-new work by London-born, Scotland-based composer Sally Beamish called “City Stanzas.” It will be paired with a work many classical music lovers already know: Beethoven’s Piano Concerto No. 1. Both will be performed by the Saint Paul Chamber Orchestra and concert pianist Jonathan Biss, whose idea it was to put them together on the same program.

MinnPost emailed with Beamish for a Q&A about her project. But first, a little background.

Biss admits to being obsessed with Beethoven. He’s about halfway through recording all 32 of the piano sonatas and hopes to finish by 2020. He is also committed to new music; his repertoire includes works by György Kurtág and commissions from David Ludwig, Leon Kirchner, Lewis Spratlan and Bernard Rands. To Biss, old and new music exist on the same continuum. Any piece of new music worth listening to is connected to music of the past.

In 2013, Biss approached the SPCO with the idea for a new project called Beethoven/5. He would play the five Beethoven piano concertos and invite five living composers to write new piano concertos, each inspired by or responding to the Beethoven. The SPCO signed on as lead commissioner for the new works.

“We were a natural choice,” SPCO Artistic Director Kyu-Young Kim said by phone earlier this week. “Jonathan has been a great collaborator with the SPCO.” Biss, Kim and then-SPCO president Bruce Coppock worked together to choose the composers. “We wanted to get a wide swath of different kinds of talent,” Kim said. “It’s an international line-up, with different voices.”

In a series of concerts that began in November 2015 and continues through the 2019-20 season, Biss plays both the Beethoven concerto and the world premiere of the new concerto. Presenting them on the same program gives the new work a context, a way in for audiences.

The 2015 program included Beethoven’s Piano Concerto No. 2 and Brooklyn-based Timo Andres’ “The Blind Banister,” which became a finalist for the 2016 Pulitzer Prize in Music. A not-too-shabby start for the series. And about that addition-to-the-repertoire thing: “The Blind Banister” has since been performed with the Ulster Orchestra and the Orchestra of St. Luke’s at Caramoor (a co-commissioner). In April, it will be performed by the New York Philharmonic.

Beamish’s “City Stanzas” is the second of the five commissions. The three other composers chosen for the Beethoven/5 project are Italy’s Salvatore Sciarrino, New York’s Caroline Shaw and Australia’s Brett Dean.

Beamish was in Scotland, preparing for her trip to Minnesota, when we emailed her some questions.

MinnPost: What about the Beethoven/5 project appealed to you? Why did you say yes to this commission?

Sally Beamish: First of all, I’m a big fan of Jonathan’s playing. And I thought it was a great project. I’ve always enjoyed following models in my music, and have written pieces inspired by Gesualdo, Bach, Beethoven (my string quartet “Opus California”) and even Brahms.

Piano was my first instrument (I became a professional viola player but have always performed on piano in chamber music at any opportunity!) and I had always wanted to write a piano concerto.

I have worked several times with the St. Paul Chamber Orchestra, and I always find it extremely rewarding. This orchestra is outstanding.

MP: What does it mean to you to write something “inspired by” or “in response to” an earlier work?

SB: It’s a great starting point. I never studied composition and have had to learn on the job. An opportunity to look carefully at a masterpiece is a great learning tool. There is so much to inspire [in the Beethoven 1]: the structure, the proportions, the scoring, the harmonic journey, the rhythmic energy. I tried to detach myself and simply “notice” how the Beethoven concerto is made.

MP: How long did it take you to write “City Stanzas”? Where did you write it?

SB: I wrote it in Glasgow. I had written two short solo pieces – one for saxophone and piano, and one just for piano – using material from the Beethoven. These were sketches which I then developed and broadened into the first and second movements. I wrote the concerto in about six weeks.

MP: What was your way in?

SB: I listened to Jonathan. His clarity and energy created sounds in my head. 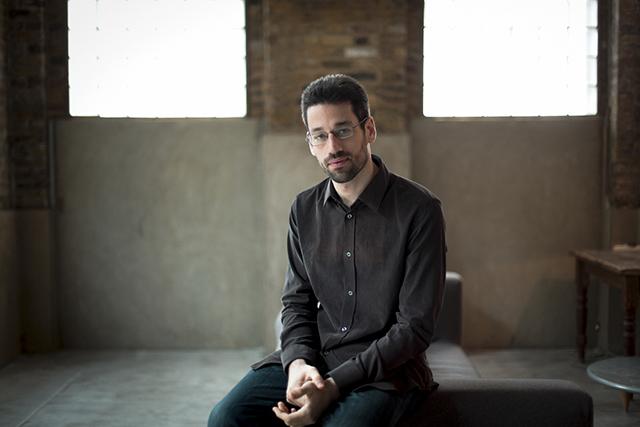 MP: Can you tell us a bit about your process?

SB: The two short pieces I wrote first were conceived on a walk along Brighton beach. I wanted to think about how to start Jonathan’s concerto, and I had these two short works to finish first. So I decided to use them as little tasters, or sketch pads.

MP: Why did you turn to the urban landscape?

SB: Having always longed to write a piano concerto, I found myself in the strange position of having three commissions from three different pianists to complete within a year. Each came with a brief, and each is for a different sized orchestra.

The first, “Hill Stanzas,” was inspired by the Cairngorm mountains in Scotland. The second, “Cauldron of the Speckled Seas,” by the Corryvreckan Whirlpool off the west coast of Scotland. So for Jonathan’s piece, I decided to address the urban landscape of Scotland.

My starting point was Glasgow, but by the time I reached the last movement, I was thinking more broadly – particularly about the work’s premiere in the USA. I thought about building, and also about creative endeavor. The beauty of architecture and the creation of music, art, and theater.

MP: For the Beethoven/5 series, there is no expectation that the newly commissioned works will sound like Beethoven or quote Beethoven or resemble the originals in any way. What are the connections between “City Stanzas” and Beethoven 1?

SB: I think there is much that resonates with the Beethoven. The use of octaves and scales in the first movement. The rhythmic motor. A straight quote in the Requiem movement, and a central theme in the Rondo which is recognizably derived from Beethoven’s main rondo theme.

Beethoven’s first movement is infused with joy, and I have translated this into a kind of reckless abandon. [Beamish called her first movement a Burlesque. We asked what that meant.] The Burlesque expresses the flamboyance of city life. Performance and glamor: cocktails, theater, late glitzy nights.

[Beethoven’s] second movement is touching and lyrical. Mine is a lament, written in memory of two friends who died in 2016 in very different circumstances. The linking factor is my own grief and regret, and I think this comes through in the music.

The last movement is a raucous parody of the Beethoven. It is the most “urban” of the three, and whereas my first movement is a celebration of city color and diversity, the third becomes increasingly embittered and ironic. The piano becomes a lone voice, expressing foreboding and even despair. In a way, I have taken the perfect beauty of the Beethoven and deconstructed it.

MP: You count jazz among your influences. Is there jazz in “City Stanzas”?

SB: There is jazz in the improvisatory quality of the piano writing. I wanted the pianist to be a commentator, and to be free and spontaneous with the themes. In the last movement, the central section, reflecting Beethoven’s wonderfully forward-looking (almost “music hall”!) central episode, is inspired by Glasgow rock bands – but interspersed with more lyrical jazz-infused piano sections.

MP: What else would you like us to know about “City Stanzas”?

SB: Each movement is constructed symmetrically, like a building. But each has instability built into it. The piano often offers a contradictory, more thoughtful view. And the last movement is sometimes “polluted” by tinnitus-like violins – a poisonous pall which leaves the whole edifice threatened by collapse.

This interview has been slightly edited and condensed.