Hundreds of artists, critics and others (curators, filmmakers, art historians, gallerists) have signed a petition calling for an Art Strike on Inauguration Day. The petition – “an invitation to cultural institutions” – begins:

An Act of Noncompliance on Inauguration Day.

No Work, No School, No Business.

Close For The Day.

Hit The Streets. Bring Your Friends. Fight Back.

[Toward an Anti-Fascist Cultural Front]

The list includes a number of big names: Cindy Sherman, Dread Scott, Richard Serra, Joan Jonas, Louise Lawler, Hilton Als. The Art Strike is proposed in solidarity with other calls for a general strike on Jan. 20. You can read the complete text here.

There’s been a lot of press about this, with more to come. Writing for Hyperallergic (which has commissioned a series about #J20), artist Coco Fusco is for it, noting that “art and artists are embedded, whether we like it or not, in economic and social networks that surround and sustain Trump.” Wealthy people buy art. She also mentions that “some tough-minded performers are saying NO to providing entertainment at Trump’s Inauguration.”

Writing for the Guardian, Jonathan Jones calls J20 “just about the least effective idea for resisting Trump that I have heard. The American left is in for a long, wretched period of irrelevance if this is its idea of striking back.” He says the strike “tastes not of real hard-fought politics but shallow radical posturing by some very well-heeled and comfortable members of a cultural elite.” Well, maybe not that comfortable, and many artists are likely to be a lot less comfortable if the Republicans succeed in repealing the Affordable Care Act.

The New York Times reports that the Museum of Modern Art and the Los Angeles County Museum of Art will maintain their regular hours that day. So will the Whitney, with a bonus: pay-what-you-wish admission.

We asked Mia and the Walker about their plans.

Mia responded: “The Minneapolis Institute of Art (Mia) will be open Friday, Jan. 20, from 10 a.m. to 9 p.m. Admission will be free, as always. We believe in the power of art to engage, connect, and transform communities and invite our visitors to use Mia as a meaningful place for reflection and expression. We provide an opportunity to view work that inspires wonder, spurs creativity and celebrates diversity, where everyone is welcome.”

The Walker’s Annie Gillette Cleveland, chief of marketing and strategic communications, got back to us with this: “The Walker Art Center will remain open on January 20, offering a space and respite where all ideas are welcome, and host two free screenings of artist William Klein’s 1969 political satire ‘Mr. Freedom.’ ” Gallery admission will be free that day; it was already in the Walker’s plan to offer free gallery admission from Jan. 10-Feb. 7. Walker hours on Inauguration Day are 11 a.m. – 6 p.m.

All take place on Friday, Jan. 20. Let us know (pespeland@minnpost.com) about others you feel are meaningful.

At the Black Dog: #DefendCivilLiberties Music Benefit. 100% of the cover, collected at the door, goes to the ACLU. Musicians scheduled to appear include The Beavers, Charley Dush, Greg Herriges, Dakota Dave Hull, Siama Matuzungidi, Leslie Rich, Matt Sowell, Donald Washington and Sue West. The Black Dog has always been a socially-minded, artist-friendly place; their newly expanded and renovated space in Lowertown, right across Prince Street from the Saints stadium, is a good place for this. 6-11 p.m. $20/$10 (student/hardship). FMI.

At Blockfort Studio: “DRUMPSTER FIRE: A Protest Charity Art Auction.” Also a benefit for the ACLU. Art by more than a dozen local artists including Chuck U., Wes Winship and Biafra will be sold by silent auction. An opening reception at 10 p.m. will be followed by live music by Prhyme8, Carnivore Bones and The Controversial New “Skinny Pill.” Doors at 7. Silent auction ends at midnight.

At the MacRostie Art Center in Grand Rapids: A Benefit Concert for the Southern Poverty Law Center. With Sam Miltich, guitarist extraordinaire; silky, swinging songbird Charmin Michelle; Sam’s dad, Matthew, on bass; and perennially cool cat Jay Epstein on drums. We often wish we lived closer to Grand Rapids, and this is one of those times. 7-9 p.m. $15 cash donation at the door. All proceeds go to the SPLC. 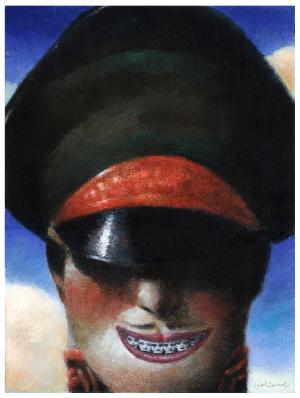 Courtesy of MCAD
“Dictator” by Brad Holland, part of MCAD’s “Another Voice: Political Illustration of the Late Twentieth Century” exhibition.

At MCAD: Opening reception for “Another Voice: Political Illustration of the Late Twentieth Century.” Provocative and perfect timing. 6-8 p.m. See the picks below FMI.

At the Robbin Gallery: “The Trump Trigger: How artists can come together to make a difference.” A panel of artists and community leaders will discuss the political climate and the positive impact art and open communication can have. 6:30 p.m. Free and open to the public.

At the Susan Hensel Gallery: “Inauguration: Acts of Resistance, Acts of Kindness.” Studio artist Hensel opened her Cedar Ave. gallery in 2004, an election year, with shows about electoral politics, the war in Iraq and dreams for peace. In March 2013, she turned the interior space into a working studio and it became a window gallery. She’ll re-open on Inauguration Day for a one-night, family-friendly community event and potluck. View protest art and performance art; hear poetry and music; make and take yard signs and buttons. Bring food to share. 6-10 p.m. FMI. Free. The evening also launches The Civility Project, a community-building initiative designed to get people talking again, like neighbors. FMI.

Tonight (Thursday, Jan. 12) at the Blue Moon building: Midstream Reading Series. Come in from the cold to an hour of readings by Michael G. Dean, who writes his (short) “index finger poems” on his smartphone; Chris Martin, an award-winning Copper Canyon Press author of “American Music” and “The Falling Down Dance”; Rosetta Peters, who’s helping to revitalize her ancestral language, Dakota; and Elizabeth Tannen, who just received a 2017 Minnesota State Arts Board grant for poetry. Pick up coffee or whatever at the Blue Moon downstairs. 3820 East Lake St., Minneapolis. 7:30-8:30 p.m. Free.

Friday (Jan. 13) through Sunday at the Walker: “Fire at Sea (Fucoammare).” If you have a heart, Gianfranco Rossi’s documentary film will break it. He takes you to the Italian island of Lampedusa, a small, rocky dot in the Mediterranean between Sicily and Tunisia, under eight square miles. Once a tourist destination, it has become the entry point to Europe for hundreds of thousands of desperate refugees. You see how the crisis is affecting locals like Samuele, a 12-year-old boy, and a compassionate doctor named Pietro, and you hear the nighttime radio call, “Please, can you help us? We are sinking!” Four showings. FMI including times, trailer and tickets ($10/8). In Italian with English subtitles.

Saturday at the Soap Factory: Opening reception for “Bleed&Burn: Catalytic Flag Making.” An exhibition “birthed by post-election funk,” organized by Alexa Horochowski and Crystal Quinn. Thirteen artists will create twelve standard-size flags that will be exhibited in the Soap’s basement gallery, then burned by each artist after the show at a location of their choosing. The flags and documentation of their burning will be made into a book published at Beyond Repair in Midtown Global Market, “a book shop and publishing site for the creative engagement of civic and cultural life.” (A flag-making workshop will take place at Beyond Repair on Jan. 15 from noon-4 p.m.) Opening reception 7-11 p.m. Readings by poet Paul Dickinson and writer Jordan Thomas at 8:30 p.m., performance by Gay Henry at 9 p.m. FMI. Exhibition closes Jan. 21.

Sunday at Mill City Museum: “Tales of the Falls: A Storytelling Tour.” Within three different historic spaces in the museum, master storyteller Richard Rousseau will spin three tales about the history of St. Anthony Falls, the Washburn A Mill, and the expectations of the present. The tour includes about two blocks of moderately paced walking. 1-2:30 p.m. FMI and tickets ($16/$14/$12). Also Feb. 12, March 12 and April 9.

Opens Tuesday at MCAD: “Another Voice: Political Illustration of the Late Twentieth Century.” An exhibition of more than 100 works published in The Progressive between 1981-1999, curated by Patrick JB Flynn, an MCAD grad who served as the magazine’s art director for 18 years. Works of social commentary and satire, these illustrations weren’t filler, they weren’t subservient to the written content, and they were free of editorial meddling. On the one hand, this show is a celebration of creative freedom and its power to grow understanding; on the other, it’s a sad reminder that we’re still dealing with the same issues we were back then. Artists include Ralph Steadman, Melinda Beck, Sue Coe, Henrik Drescher, Brad Holland, and Stephen Kroninger. Ends March 5. The opening reception is Friday, Jan. 20 – Inauguration Day. Flynn will give a curator’s talk on Monday, Feb. 6 at 1 p.m.

The #J20 Art Strike and other Inauguration Day events