Jazz singer Jimmy Scott’s music transcended his life. Born black in 1925, orphaned at 12, hit with a congenital hormonal syndrome that stunted his growth, keeping his face hairless and his voice high, he sang like a heartbroken angel. Every song was an emotion-filled story, and his timing was crazy but unerring, like the ticking of a clock from an alternate universe. Oscar winner Joe Pesci says that hearing Scott in person was “a serious spiritual experience.” We came home from a Jimmy Scott show and wrote our first-ever piece about music, not because we wanted to, but because we had to.

Scott’s music might have helped German music producer Ralf Kemper transcend his life, too. Grieving the death of his wife, feeling empty about the work he was doing for TV and advertising, Kemper decided to make an album with Scott, whom he had long admired. His plans were grand. He would hire a full orchestra and the best arrangers and get all sorts of famous people to join in: Elton John, Stevie Wonder, Sting. He would give Scott the spotlight he deserved.

Kemper arrived in the States to find Scott permanently in a wheelchair, having almost died the day before. Was Kemper too late? Could Scott rally enough to sing again? A number of stars dropped out of the project or never returned Kemper’s calls. But many had lasting love for Scott, and they gathered around. People like Quincy Jones, who had worked with Scott in Lionel Hampton’s band. And David Sanborn, Dee Dee Bridgewater, Kenny Barron, Oscar Castro Neves and Bob Mintzer. And Pesci, the tough-guy actor, who treated Scott with tenderness and respect.

The album was finished – Scott died shortly after – and is due out on the Eden River label on Jan. 27. It’s not the Concord release Kemper was hoping for, and it nearly bankrupted him (he sold his own recording studio to fund it), but what an album. “Someone to Watch Over Me” is killer. So is “Motherless Child.” And “Everybody is Somebody’s Fool,” one of Scott’s signature tunes.

A documentary film called “I Go Back Home: Jimmy Scott” tells the story of the album’s creation, with many insights into Scott from his biographer, David Ritz. Directed by Yoon-Ha Chang, it will have its Minnesota premiere Wednesday night (Jan. 11), presented by Sound Unseen. Labors of love can be saccharine and dull. This one is neither. It’s so moving and beautiful we just had to write about it.

At the Trylon Microcinema. 7 p.m. FMI and tickets ($10). If tickets sell out online, there are usually a few available at the door.

‘Glensheen’ creators are back

Can lightning strike twice? The History Theatre hopes so, and we do, too. The musical “Glensheen” by Jeffrey Hatcher and Chan Poling was such a hit in 2015 that it returned in 2016. On Sunday (Jan. 15) we’ll have the chance to see Hatcher and Poling’s next collaboration, “Lord Gordon Gordon,” not as a finished product but as a staged reading – a play in development, helmed by a professional director and performed by professional actors.

Saturday: “A Crack in the Sky” by Harrison David Rivers and Ahmed Ismail Yusuf. Harry Waters Jr. directs the tale of Minnesota-based Somali immigrant Yusuf, who was inspired to become a writer by the first book he ever owned, Maya Angelou’s “I Know Why the Caged Bird Sings.” The cast includes Abdifatah Farah, Darius Dotch, Dan Hopman and Adam Western.

Sunday: “Lord Gordon Gordon.” The people who brought us “Glensheen” return with a new musical about a confidence man who came to Minneapolis in 1871 to fleece a railroad baron, then almost caused a war between Minnesota and our neighbor to the north. Ron Peluso directs, Robert Elhai is music director, and the cast includes Mark Benninghofen, Dieter Bierbrauer, Gary Briggle and Ann Michels.

This will be the second time around for “Stewardess” and “Mr. Hemingway.” Both were part of Raw Stages 2015 and have been reworked. “A Crack in the Sky” and “Lord Gordon Gordon” are brand-new.

Opens tonight (Tuesday, Jan. 10) at the Orpheum: “The Bodyguard: The Musical.” Think the words “I Will Always Love You.” Can you hear Whitney Houston sing them in your head? One of the top-selling songs of all time was the centerpiece of the 1992 hit film starring Houston as a pop singer and Kevin Kostner as a former Secret Service agent hired to protect her from a stalker. Grammy-nominated R&B star Deborah Cox, who was friends with Houston, takes on the role of Rachel for this romantic thriller of a musical. Here’s her dazzling preview of the show’s top songs. 7:30 p.m. FMI and tickets ($39-134). Ends Sunday, Jan. 15. 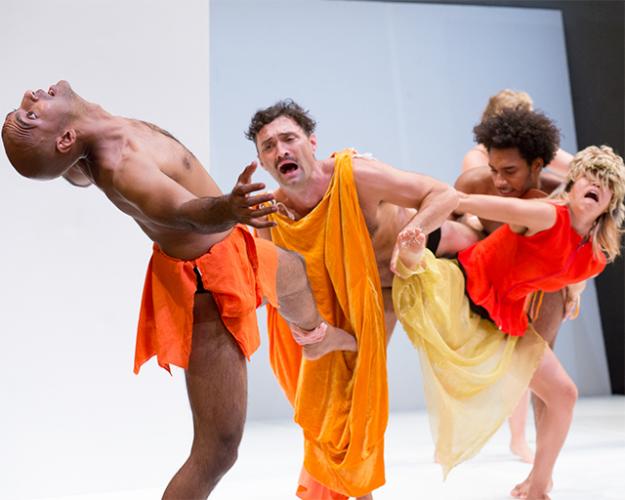 Thursday through Saturday at the Walker: Faye Driscoll: “Thank You for Coming: Play.” Walker performing arts curator Philip Bither’s annual Out There festival – a sure cure for the winter blahs – began last weekend with Andrew Schneider’s “YOUARENOWHERE,” which will probably make our end-of-year, best-of-2017 list. It continues with a Walker commission from Bessie Award-winning choreographer/director Faye Driscoll. The second part of her “Thank You for Coming” trilogy, “Play” looks at personal stories and the gaps between what we say and what we do. Expect some audience participation. 8 p.m. all nights. FMI and tickets ($25/20 Walker members).

Opens Friday at the Park Square: “Big Money.” We all want to beat the odds, beat the system, beat the house and win big. But would we bend the rules to do it? On May 19, 1984, Paul Michael Larson, a former ice-cream truck driver from Ohio, won $110,237 in cash and prizes on the TV game show “Press Your Luck,” equivalent to $255,000 today. It was the most anyone had ever won in a single game. Led by company members Derek Lee Miller and Theo Langeson, created from scratch by an ensemble of seven performers, Sandbox’s new play shows how Larson cracked the code and what it really means to win in America. On the Andy Boss Stage. 7:30 p.m. FMI and tickets ($40-60). (Pssst: $25 for all Sandbox Theatre email subscribers.) Ends Saturday, Jan. 27.