If you’ve been watching “Empire” on Fox teevee, you know Grammy-nominated soul singer and actress V Bozeman for her recurring role as Veronica. On Thursday, Jan. 19, she’ll add several megawatts of star power to the Ted Mann at the University of Minnesota’s 36th annual Martin Luther King Jr. Tribute.

When School of Music professor Reginald Buckner held the first MLK Jr. tribute in Northrop on Jan. 22, 1982, it was the only event of its kind in Minnesota. Buckner died in 1989, but the tribute continued. Today it’s a joint program of the U’s Office for Equity and Diversity and the School of Music. Long may it continue.

As always, the event is free and open to the public. No tickets or reservations are required. 6-7:30 p.m. at the Ted Mann Concert Hall.

When the Walker appointed Fionn Meade its first-ever artistic director in March 2015, it was news. The press release explained, “The newly created position more directly reflects the Walker’s unique role as a public art center with its embrace of multidisciplinary artistic platforms, while also recognizing an ongoing commitment to research and scholarship.”

Leading up to that appointment, Meade, who came here from the Center for Curatorial Studies at Bard College and Columbia University, spent 10 months as senior curator of cross-disciplinary platforms, working closely with Olga Viso, the Walker’s executive director. That post was also created for Meade.

On Friday, the Star Tribune reported that Meade had resigned from the Walker for “personal reasons.” And that “for now, the Walker won’t be filling the artistic director position.” At the moment, the Walker has a lot going on. The new $25 million main entrance just opened, and the Esker Grove restaurant is up and running. The sprawling Cunningham: Common Time” retrospective, for which Meade was lead curator, begins Feb. 8,  And the Minneapolis Sculpture Garden will reopen in June.

Meade’s exhibitions during his three years at the Walker also included the first U.S. solo show of work by German artist Andrea Büttner; “Radical Presence: Black Performance in Contemporary Art”; and “Question the Wall Itself,” co-curated with Jordan Carter, on view through May 21.

The Atlanta Journal-Constitution (Atlanta is Lewis’ district) reports that “Walking with the Wind: A Memoir of the Movement,” is temporarily out of stock, sales having spiked by nearly 106,020 percent, moving the book from the No. 15,918 spot on Amazon’s best-sellers list to No. 15. The three-volume “March” was Amazon’s best-seller as of Saturday, with sales spiking by nearly 106,700 percent post-Trump tweets.

“March” is now temporarily out of stock, too, and on Monday was still the No. 1 best-seller. At least “March” is also available for Kindle.

Tonight (Tuesday, Jan. 17) at the University Club of St. Paul: Carol Connolly’s Reading by Writers: Wayne Nelsen Poetry Film Festival. Wayne Nelsen makes short, animated films to accompany poems by Twin Cities writers. His paper-doll-theater-style films, combined with the voice of the poets reading their work, add dimension to our understanding, plus they’re lovely to look at and hear. Poets Tom Cassidy, Deborah Keenan, Klecko, Gretchen Marquette and Bill Meissner will be there as Nelsen’s films about their work are shown. A Q&A follows. Here’s a Nelsen film about a Marquette poem. 7:30 p.m. Free and open to the public. A hat will be passed in support of the Saint Paul Almanac.

Thursday at the Trylon: “In Our Bodies Live Our Stories.” Darren Johnson’s new film celebrates women from different communities of color, standing together in art-making. Johnson’s focus is the Minnesota-based Ananya Dance Theatre, a contemporary Indian American dance company whose social justice-based dance theater tells the stories of women’s lives around the globe. These premiere screenings will be dedicated to the late Laurie Carlos. 7 and 9 p.m. FMI and tickets ($12). 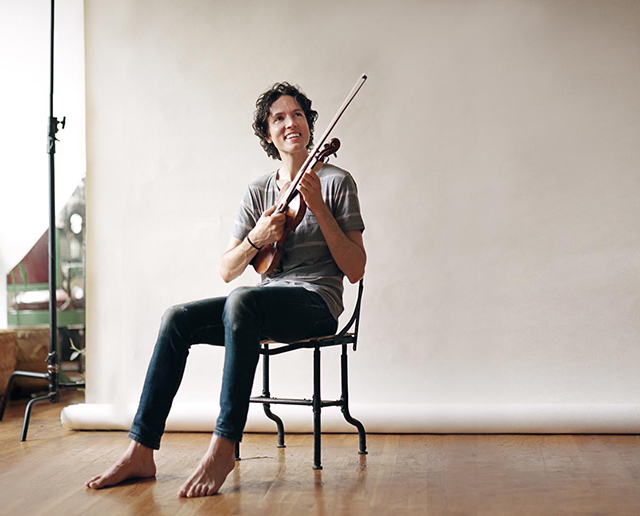 Courtesy of the artist
Tim Fain

Thursday at TPT: Tim Fain: “Portals: A Multi-Media Exploration of Longing in the Digital Age.” If you saw the film “Black Swan,” you’ve heard (and seen) violinist Tim Fain. Or maybe you heard him play the violin in “12 Years a Slave” or “Bee Season.” Fain is an acclaimed and accomplished young musician whose ideas include putting together a night of music, film and dance featuring many artists, some via Skype and film. His St. Paul appearance with Schubert Club Mix will include more film than Skype; Fain will be alone on stage, and radio personality Fred Child will join him via Skype to read poems by Leonard Cohen. High-tech TPT is the place to experience what promises to be a fascinating program including a work for solo violin by Philip Glass (written for Fain), film by French choreographer and director Benjamin Millepied (another “Black Swan” alum), and music by Aaron Jay Kernis, William Bolcon, Kevin Puts, Nico Muhly and Lev Zhurbin, plus films by Kate Hackett and those Cohen poems. 7:30 p.m. FMI and tickets ($30).

Friday at Jazz Central: Adam Meckler and Cory Grossman. The trumpeter and the cellist in a night of duets. Meckler plays all over the Cities, leading his own 18-piece big band and quintet, performing with Youngblood Brass Band and Nooky Jones, Jack Brass Band, the Jana Nyberg Group, Graydon Peterson’s quartet and Pete Whitman’s X-Tet. His latest CD is “Wander” on Shifting Paradigm. Grossman plays and records with musicians including Dan Wilson, the New Standards, Jeremy Messersmith, Chris Koza and the Laurels String Quartet. 8 p.m. $10 at the door, $5 with student ID.

We’ll keep letting you know about arts-related events happening in and around the Twin Cities. Here’s the first batch, in case you missed it.