Penumbra Theatre in St. Paul is one of our state’s – make that one of our nation’s – most important and influential cultural institutions. The largest African-American theater in the U.S., it has produced 39 world premieres, including Pulitzer Prize winner August Wilson’s first professional production.

Penumbra has produced more August Wilson plays than any other theater in the world. When Denzel Washington announced in December that he would film all 10 of Wilson’s plays, anyone who knows Penumbra probably thought, “Well, what were you waiting for?”

A new exhibit at the History Center, “Penumbra Theatre at 40: Art, Race and a Nation on Stage,” is a solid introduction for those who don’t know Penumbra and a chance to go deeper for those who do. It took a village to put it together; the History Center, Penumbra, the Givens Collection of African American Literature at the U and Umbra Search African American History – a new search engine that provides online access to materials from more than 1,000 U.S. archives, libraries and museums – are all behind it.

The exhibit occupies two rooms at the History Center. Just a few of the many things we noticed during a walk-through: Books, magazines and artifacts from the Black Arts movement. W.E.B. DuBois’s guiding statement about “the plays of a real Negro theatre” (“they must be about us, by us, for us, and near us”). Early records from the Hallie Q. Brown community center, which Penumbra has called home since its start in 1976. Scripts, playbills and posters.

In a video made for the exhibit, founder Lou Bellamy explains, “ ‘Penumbra’ is a Latin term that means ‘partial shadow.’ It’s that place that an artist has to go to create a world that is neither light nor dark. It also sort of symbolized the marginalization of culture and all that sort of stuff. … These are all afterthoughts. It was fun to say penummmbra.” He notes that in the early years, “We weren’t able to get state arts funding because they said we were doing social service, not art.”

There’s a full-size reproduction of the quilt wall that stretches across the rear of Penumbra’s auditorium, with descriptions of each square; a reproduction of the red door seen in four of Wilson’s plays; and a costume designed by Mathew J. LeFebvre for “Ma Rainey’s Black Bottom.” Part of the actual iconic “Fences” set, and Troy’s baseball bat. Filmed clips from past “Black Nativity” performances, Penumbra’s annual Christmas program. A large photo mural of a scene from “The Ballad of Emmett Till.”

At a dressing room table, company members including Yolande Bruce, James T. Alred and James Craven appear in a lighted mirror and tell stories about the theater. From “Black Eagles,” a play about the Tuskegee Airmen, there’s a puppet designed by Seitu Jones and a place to listen in on the play’s stirring curtain call, with choirs singing and the sounds of planes flying low overhead.

Penumbra’s 40th is also the year when Lou Bellamy’s daughter, Sarah Bellamy, has taken over as artistic director. The exhibit includes glimpses of what she has in mind for the future: more emphasis on community, conversation, education and social change.

The best way to get to know a theater is by seeing a play, so Penumbra actors will be at the exhibit on the second Tuesday of every month (March-July) from 6-8 p.m., performing short scenes and monologues from the theater’s plays. On Tuesday, April 25, from 7-8:30 p.m., Lou Bellamy, Penumbra company members and Star Tribune theater critic Rohan Preston will talk about creating theater about race in America. Admission to the History Center is always free on Tuesdays. The exhibit will close on July 30.

For its 25th anniversary, the Mall of America is holding a Writer-in-Residence contest. The winner will spend five days “deeply immersed in the Mall atmosphere while writing on-the-fly impressions in their own words.” The up-to-$4,500 prize includes airfare (the contest is open to legal residents of the U.S.), four nights in an attached hotel, a $400 gift card to buy food and drinks, and a $2,500 honorarium.

It’s part writing assignment, part performance art. The winner’s workspace will be located in a common area somewhere within the MOA. Daily work hours will be 11 a.m. to 7 p.m., and at least four of those hours must be spent at the writer’s desk, on public view. (Because few things are as compelling as watching a writer write.) Ongoing work may be displayed in almost real time on a large monitor at the workspace. Note the “almost.” All content must be approved by a MOA marketing representative. There are other rules; you can read them here.

To apply, you’ll need to pitch your idea. If you’re named one of the 25 semifinalists, you’ll have to pen a 500- to 800-word essay. Where will your essay end up? The website says, “Just wait and see!” (What will the MOA do with 25 essays? Make posters? Wrap water towers? Plaster them on buses?) Whatever you write will belong to them.

Some will see this as a soul-selling proposition. The Verge has dubbed it “four days of capitalism hell.” (That writer didn’t read very carefully. It’s five days.) If that’s how you feel, don’t apply. What it is, is a pretty decent PR writing assignment. It’s not like being writer-in-residence for a tobacco company, for Pete’s sake. You might think of it as five days on a cruise ship, except the MOA (at 4.2 million square feet) is three times bigger than the world’s largest cruise ship. The rules don’t say if you’ll be allowed off the premises during your residency, maybe to walk across the street to Ikea.

Entries are open now through March 10. If you win, write when you get there. 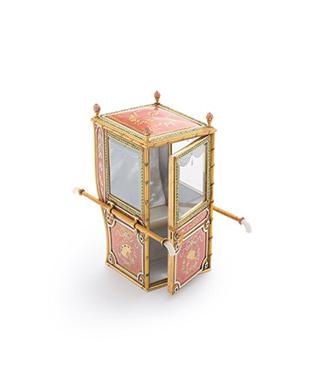 Closes Sunday at The Museum of Russian Art: “Unknown Fabergé: New Finds and Re-Discoveries.” Time is running out to see this one-of-a-kind exhibit of more than 80 previously unseen or little-known works by Fabergé. No jeweled eggs (though a film about Fabergé eggs shows on a continuous loop), but delicately jeweled and enameled objects and adornments of beauty and intricacy. You’ll lean in to see the details on pendants and cigarette cases, cuff links and picture frames, desk clocks and icons. Most items on display are from private collections; some are from collections and museums in Finland, London, Houston and Chicago. Many have Imperial provenance, discovered only recently through scholarship and research, because such information was forbidden or inaccessible after the Revolution and during socialism. As a bonus, a pop-up exhibition continues through Sunday, featuring a new coloring book for adults called “Vanished Splendor: The Colorful World of the Romanovs” that includes several of the objects in the Fabergé show. Thursday and Friday 10 a.m. – 5 p.m., Saturday 10 a.m. – 4 p.m., Sunday 1 p.m. – 5 p.m. Admission $10 adults, $8 seniors, $5 children and students with ID, under 13 free.

Tonight (Thursday, Feb. 23) at Icehouse: SPCO at Icehouse. Musicians from the St. Paul Chamber Orchestra perform Mozart’s Divertimento in D and Quartet in D, Villa-Lobos’s “The Jet Whistle” and Jessie Montgomery’s “Strum” in a casual, intimate club setting. Your ticket includes a drink of choice. If you’re hungry, Icehouse is good eating. FMI and tickets ($20).

Saturday: John Scofield vs. Julian Lage and Chris Eldridge. In one corner: the jazz icon and masterful improviser who just won two Grammys for his album “Country for Old Men,” an homage to country music greats including Hank Williams and Merle Haggard. In the other: the acclaimed young virtuoso and the Punch Brother. In their current outings, both Scofield and Lage lean more folksy/Americana than jazz, so if that’s your thing, you won’t be disappointed either way. Scofield (with Bill Stewart, Larry Goldings and Vicente Archer) will be at the Dakota, 7 and 9 p.m. FMI and tickets ($25-$45). Lage and Eldridge will be at the Hopkins Center for the Arts, 8:30 p.m., social hour at 7. FMI and tickets ($27).

Sunday at the Lakeville Area Arts Center: Coffee Concert with Osmo Vänskä. The Minnesota Orchestra’s maestro swaps his baton for his clarinet in an afternoon of music by Mozart and Brahms. With Erin Keefe and Peter McGuire (violins), David Auerbach (viola) and Silver Ainomäe (cello). Vänskä and Keefe will also perform the violin/clarinet duo “Eros,” a wedding present written for them by their Finnish composer friend Kalevi Aho. 2 p.m. FMI and tickets ($25).

At the History Center: ‘Penumbra Theatre at 40’; SPCO at Icehouse