In the image above, four dancers are dancing. Watching them dance is almost like looking at the image, because they barely move, and when they do, they move so slowly you wonder if you’re imagining or dreaming it. They hold impossible positions forever, bodies curled or extended, heads twisted, arms or legs in the air. Simply observing brings you into a still, private place.

Choreographed by Maria Hassabi, the dance is a live installation called “Staging” that will be performed in the Walker’s Cargill Lounge and galleries today (Wednesday, Feb. 8) through Sunday, and again next Tuesday through Sunday (Feb. 14-19) as part of “Merce Cunningham: Common Time,” a major new exhibition that opens today at the Walker. Eight highly trained, superhumanly strong dancers will perform looped, long-form choreography in performances that are more sculpture than dance. If you go, please don’t step on them.

“Staging” is one of several new commissions that are part of the Cunningham show, which is, if you’ll pardon the word, huge. Eight galleries (the whole of the Walker’s brick Barnes Building) plus the cinema, the McGuire Theater and other spaces. Over 230 objects in tens of thousands of square feet of space. Over five months of performances, conversations, receptions, lectures and films.

Cunningham’s work was collaborative and interdisciplinary, and so is the show. It’s not only about dance, but paintings, sculptures, sound works, music scores, costumes, stage décor and films. Many objects are from the Walker’s collection; some are on loan from major institutions and artists who worked with Cunningham.

The phrase “Common Time” was Cunningham’s way of saying that movement, sound and visual art could be both independent and interdependent while sharing a “common time.” His dances included set pieces, costumes, backdrops and props created by artists including Robert Rauschenberg, Jasper Johns, Frank Stella, and Andy Warhol, and music by composers John Cage (Cunningham’s life partner), David Tudor and Takehisa Kosugi, among many others. Often, everything came together for the first time in a dress rehearsal or on opening night.

During her introduction at Tuesday’s preview, Olga Viso, the Walker’s executive director, noted that the exhibition “not only surveys the work of Merce Cunningham and his career, but it also looks at the evolution of postwar art and is a how-to guide on how to blur the boundaries across generations and across disciplines.”

The Walker had a decades-long relationship with Cunningham that began in 1963 and continued through several residencies, commissions and performances that included Cunningham’s landmark work “Ocean,” performed in 2008 in a granite quarry in central Minnesota before 4,000 people. (Charles Atlas’s film of that event screens at the Walker Thursday night as part of the exhibition opening.) In 2011, the Walker acquired the Merce Cunningham Dance Company Collection of more than 4,500 objects. After that, they almost had to have a big exhibition.

Six years in the making, “Common Time” is celebration, survey, retrospective, revelation, and an opportunity to dig deep into Cunningham’s work and explore why it matters. There are surprises at every turn. Rows of colorful costumes, some wool (imagine dancing in wool). Bruce Nauman’s “Green Light Corridor,” an impossibly thin passageway you’re invited to squeeze through, if you dare. Warhol’s floating “Silver Clouds,” clinging to the ceiling above your head.

Mysterious John Cage music scores. A short black-and-white film of Cunningham dancing, young and faun-like. A Rauschenberg “Combine,” made as stage décor from found objects and scraps. A wood box by Robert Morris that contains the sounds of the box being made. An immersive (immerce-ive?) installation of excerpts from 21 dances; as you move through it, you become part of the choreography.

And “Stillness,” an entire gallery of screens and monitors showing six films by Tacita Dean in which Cunningham, 88 years old and in a wheelchair, improvises a new choreography for Cage’s “4’33”,” a work for piano where the pianist sits at the instrument for four minutes and 33 seconds without playing a note. Like Maria Hassabi’s dancers, Cunningham barely moves.

An exhibition of this size and scope can be overwhelming. It can be crowded with stuff and demand too much bending over cases or leaning into labels. In our relatively quick trip through on Tuesday, “Common Time” felt spacious, with room to think and breathe. It’s here long enough that you can visit several times (a good excuse for a membership, if you don’t already have one).

Pick up a “Common Time” brochure while you’re there and plan to attend some of the events. Maybe the CCN-Ballet De Lorraine dance performance at Northrop next Thursday (Feb. 16), which reprises a 30-year-old Walker co-commission. Or a “Music for Merce” concert at the Walker on Feb. 23 or 24. However you choose to approach this beast, you probably shouldn’t miss it.

Opens Friday at Midpointe Event Center: Skylark Opera Theatre Presents “The Tragedy of Carmen.” Skylark went through a rough patch in 2016 and canceled its 36th season. Back with a new artistic director, Robert Neu, who knows Skylark well (he produced nine operas for the company in the past nine years), it’s presenting an unconventional “Carmen” that should lure both opera lovers and theatergoers. Peter Brook’s reimagining of Bizet’s warhorse uses six singer/actors in an intimate, pared-down production in an unconventional venue – a ballroom that feels like a warehouse. 7:30 p.m. FMI and tickets ($24-29). Ends Feb. 18. We saw Neu’s “Figaro” at the Hill House last summer and loved it. 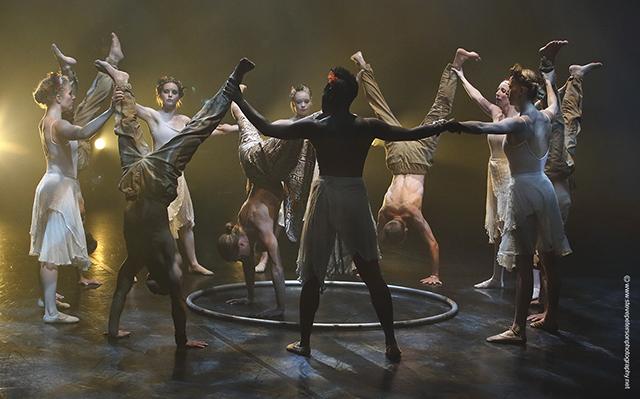 Photo by Steve Peterson
“Drop the Mic: The Experience”

Friday through Sunday at the Cowles: Curio Dance: Drop the Mic: The Experience. The dance company led by Dario and Giselle Mejia, a brother-sister choreographer-dancer-teacher team, delivers a varied and colorful program of contemporary, breaking, zouk, jazz funk, acrobatics and Cyr wheel dance. (Cyr wheel? YouTube it.) A show of solidarity and love, set to the music of American rock guitarists including Jimi Hendrix and, of course, Prince. 7:30 p.m. Friday and Saturday, 2 p.m. Sunday. FMI and tickets ($22-25).

Sunday at the Film Society’s St. Anthony Main Theatre: National Theatre Live: “No Man’s Land.” Two lions of the theater, Ian McKellen and Patrick Stewart, star in Harold Pinter’s play about aging writers who meet, drink and play a power game in a Hampstead pub. A hit on Broadway, now back at Wyndham’s Theatre in London’s West End. The broadcast will be followed by a Q&A with the cast and director. 1 p.m. FMI, trailer and tickets ($20-$10). 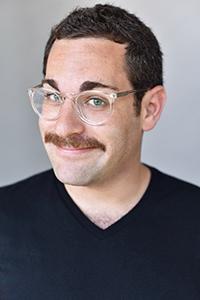 Sunday at HUGE Improv Theater: Jason Shapiro: “Can You Hear Me Now? Crafting a Voice in Social Media.” A Minneapolis native turned L.A.-based comedy writer, Shapiro has a Twitter feed, @LosFelizdaycare, with just under 88,000 followers. It’s all about child-rearing and the challenges faced by wealthy parents, except Shapiro is a 29-year-old single guy and Los Feliz Day Care is a parody account. A really, really funny parody account. Social media analyst Andrea Siegel will join him onstage. A Rimon Artist Salon. 4 p.m. FMI and tickets ($12/$6 ages 36 and under).

Saturday and Sunday at the Capri: Legends: “Sweeping Through the City: A Celebration of Gospel Music.” Songs heard in churches across the country during the civil rights era, made famous by Mahalia Jackson, the Barrett Sisters, Shirley Caesar and the Caravans in the 1950s and ’60s. With longtime Sounds of Blackness member Shirley Marie Graham and special guest Paris Bennett, the Season 5 “American Idol” contestant who’ll play Dorothy in “The Wiz” at the Children’s Theater in January. 7 p.m. Saturday, 3 p.m. Sunday. FMI and tickets ($25).

Sunday on your radio etc.: “A Prairie Home Companion.” Because one of host Chris Thile’s guests is the great jazz pianist Brad Mehldau. Perhaps you were at the Walker in 2014 for “Intuitive Expression: A Brad Mehldau Celebration,” when two nights of concerts included one with Mehldau’s trio and another with a guy named Chris Thile, who played – what, the mandolin? Seriously? We went because of Mehldau and were totally won over by Thile, and by the Mehldau-Thile combination. The pair just released their first duo album on Nonesuch, and it’s terrific, and you can expect to hear some of it on Sunday’s “Prairie Home.” We’d suggest getting tickets but it’s been sold out for ages and rush seating won’t be available. Thile’s other guests are the indie pop band Lucius and comedian Tom Papa. 5 p.m. on your local public radio station, online or SiriusXM Satellite’s NPR Now channel. FMI.