You never think the last time you see someone will be the final time. We last saw Stanislaw Skrowaczewski conduct the Minnesota Orchestra on Oct. 14, 2016. Crossing the stage toward the podium, he looked bent and a bit unsteady, his white shock of hair leading the way. He was 7 years shy of 100 years old.

Then he stepped onto the platform, picked up the baton and became Zeus holding a thunderbolt. He conducted the entire Bruckner Eight – all 90 minutes and 10 million notes – without a score. The music was in his head and hands, his glances and gestures toward the musicians who knew him better than any, the musicians of the Minnesota Orchestra.

They had a long relationship, the musicians and the maestro: 56 years. It began in 1959, when Skrowaczewski and his wife escaped from communist Poland. At 36, he already had an international career. He took a position as music director of the Minnesota Orchestra, then called the Minneapolis Symphony, and stayed for 19 years.

During his tenure, the orchestra grew from 85 part-time to 95 full-time musicians. Skrowaczewski campaigned hard for a new concert hall, and in 1974, he moved the band from big-as-a-barn Northrop on the University of Minnesota campus to brand-new, acoustically brilliant Orchestra Hall in downtown Minneapolis.

When he stepped down in 1979, he was named conductor laureate and returned every year to lead the orchestra.

Skrowaczewski was principal conductor of England’s Hallé Orchestra from 1984-1991 and Japan’s Yomiuri Nippon Symphony from 2007, and a regular guest conductor of the Philadelphia Orchestra, Cleveland Orchestra and a German radio orchestra, yet he continued to call Minnesota home. He was living here on Oct. 1, 2012, when the Minnesota Orchestra musicians were locked out by management in a bitter labor dispute that would last 15 months.

When the musicians decided to hold their own independent concert on Oct. 18, which would have been their 2012-13 season opening night, Skrowaczewski became the first former conductor to side publicly with them, leading a sold-out “LOMoMO and the LEGEND” concert (LOMoMO stood for Locked Out Musicians of the Minnesota Orchestra; the Legend was Skrowaczewski himself) at the Minneapolis Convention Center.

His presence on the podium was a powerful statement. Traditionally, in musician-management disputes, conductors and former conductors are expected to keep quiet. Instead, Skrowaczewski led another musician-organized concert in November 2013.

Seven independent concerts were held in all. Two were conducted by former Minnesota Orchestra music directors Edo de Waart and Eiji Oue. Osmo Vänskä led two, one before he resigned and one after. Hugh Wolff, who had led the St. Paul Chamber Orchestra from 1992-2000, conducted a concert.

When the lockout ended and the musicians returned to Orchestra Hall, it was Skrowaczewski who led the homecoming concerts in February 2014. The program included his own orchestration of Bach’s D-minor Toccata and Fugue, the same work performed at Orchestra Hall’s opening concert in 1974. He celebrated his 90th birthday there on Feb. 23 with the world premiere of his newest composition – Skrowaczewski was also a respected composer – and his own arrangement of Bruckner’s Adagio. (Michael Anthony spoke at length with the maestro around this time.)

On Oct. 15-17, 2015, Skrowaczewski led three performances of Schumann’s Cello Concerto and Bruckner’s Symphony No. 7. On Oct. 31, he became the oldest composer-conductor ever to conduct at London’s Royal Festival Hall, leading the London Philharmonic in Bruckner’s Fifth. On Oct. 14 and 15, 2016, he conducted Bruckner’s Eighth – the same symphony he led when he retired as the Minnesota Orchestra’s music director – and matched Leopold Stokowski in age for longevity of conducting performances.

In November, he suffered a stroke and canceled a conducting gig with the Dallas Symphony. (He already had commitments on his 2017 calendar.) He suffered a second stroke earlier this month and died Tuesday morning.

A memorial service to celebrate his legacy will be held on Tuesday, March 28, at Orchestra Hall. We’ll share the details as we learn them.

Tonight (Wednesday, Feb. 22) at the Parkway: “Saving Banksy.” The internationally famous – and anonymous – British street artist Bansky creates public art that’s not for sale. Until it’s removed and put up for auction, often selling for hundreds of thousands of dollars. Is it art or vandalism? Is it free or not? Do others have the right to profit from it? Should art be stolen? Should it be preserved? This acclaimed documentary asks all kinds of questions about legality, artists’ rights, artistic boundaries, public works and who profits from them. Chank Diesel will introduce it and briefly discuss the issues. For 21+ (language); minors admitted with parent or guardian. A Minnesota premiere. 7 p.m. FMI and tickets ($10 advance or door). Here’s the trailer. 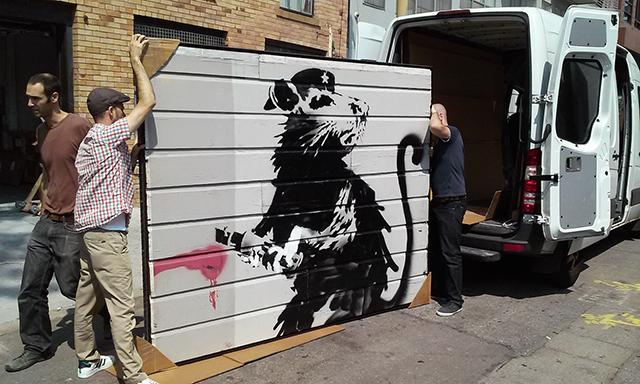 Thursday and Friday at the Walker: Music for Merce: A Two-Night Celebration. Curated by composer, guitarist and violist John King, whose many works over the years have included commissions from the Merce Cunningham Dance Co., this once-in-a-lifetime, two-night event will feature solo, duo, ensemble and landmark works by electronic music pioneer and longtime MCDC associate David Behrman, contemporary classical composer Christian Wolff, and composer/performers Joan La Barbara, Fast Forward, Ikue Mori, George Lewis, Zeena Parkins and Radiohead’s Philip Selway with London multi-instrumentalist Quinta. All serious heavy hitters; coordinating this event with their schedules must have taken some doing. Each evening will conclude with a collectively made real-time composition. 8 p.m. both nights. FMI and tickets ($50 both nights; $28/$22.40 each).

Friday at the University Lutheran Church of Hope: “Phenomenal Women: A Concert of Music Written by Women for Women.” The U of M Women’s Chorus has spent the past year in partnership with the Voices of Hope, a choir from the women’s prison in Shakopee. This concert is one result. There will be two performances: one at the prison (not open to the public), and this one at the church, but without the Voices of Hope, who are unable to attend. The program will include poetry by Maya Angelou and reflections on the journey of two very different choirs discovering they are not so different after all. Student Amanda Weber will conduct. 7:30 p.m. Free; donations support the Voices of Hope and the prison’s music program.

Friday and Saturday at the O’Shaughnessy: Threads Dance Project: “The Secrets of Slave Songs.” Born from the belief that the traditional Negro spiritual was a secret language among slaves, this Sage Award nominee by Threads artistic director and choreographer Karen L. Charles presents the heartbreak of attempted escape, the sorrow of failure and the triumph of liberation. “Although ‘The Secrets of Slave Songs’ originates from a place that seems distant,” Charles says, “I seek to confront the trauma of the institution of slavery in America and ask the audience to examine how that trauma abides with us today via a society highly polarized by race.” The songs include re-imagined versions of spirituals by composer Bill Banfield and others. 7:30 p.m. FMI and tickets ($19-27). 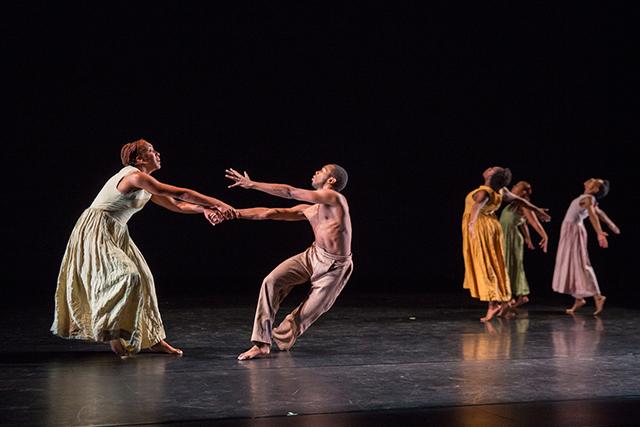 Photo by Bill Cameron
“Slave’s Lament,” part of “The Secrets of Slave Songs”

Friday through Sunday at the Baroque Room: The Complete Bach Sonatas for Strings and Harpsichord with Flying Forms. Geek out, Bach lovers. In three weekend concerts, Flying Forms – Marc Levine on baroque violin, Tulio Rondón on viola da gamba and Tami Morse on harpsichord – will play six obligato violin sonatas, three obligato viola da gamba sonatas, two continuo violin sonatas and a fugue. Each concert is different. 7:30 p.m. Friday and Saturday, 3 p.m. Sunday. FMI and tickets ($40/30 all three, $20/15 per concert). Or get a taste at a free lunchtime concert on Friday at noon.

Stanislaw Skrowaczewski — ‘the legend’ and the legacy