The stars have aligned for the Children’s Theatre Company’s latest world premiere. Continuing its tradition of bringing Dr. Seuss stories to the stage – first “The 500 Hats of Bartholomew Cubbins,” then “How the Grinch Stole Christmas” – “Dr. Seuss’s The Sneetches The Musical” takes the Seuss tale, adds songs, dances, subplots and characters, and serves it up at top speed in vivid colors. Almost everything about “The Sneetches” is neon yellow, with touches of fiery orange and bright green.

Like all Seuss stories, “The Sneetches” has a bigger meaning than its small vocabulary and silly rhymes (stars/thars, beaches/eaches) suggest. And it could not be more timely. Prejudice, discrimination, and division are the themes of a tale about creatures called Sneetches. Some have stars on their bellies, and that’s a good thing. Others don’t, and that’s a bad thing. Until a greedy con man named Sylvester McMonkey McBean shows up with a machine that can add or remove stars, for an ever escalating price. The Sneetches’ world is turned upside-down, their pockets are emptied, and finally they realize that “no kind of sneetch is the best.” Stars or not, all are equal.

The book “The Sneetches” was first published by Random House in 1961, during the civil rights movement. Theodor Seuss Geisel was born in 1904, and he knew that Jews had been required to wear yellow Stars of David by the Nazis. His book has been called a critique of anti-Semitism, though not everyone agrees with that interpretation. Conservative parents need not fear that the Children’s Theatre musical is a liberal sermon. At its core, “The Sneetches” is about finding common ground despite our differences. That’s something most of us can agree on, and we have to start somewhere.

Young Natalie Tran is delightful as Standlee, a Star-Belly child who doesn’t fit in with the other Star-Bellies and reaches out in friendship to a Plain-Belly named Diggitch (Reed Sigmund). Dean Holt is a hilarious Beachwatcher, perched high on a Seussian lifeguard’s chair, making sure no lines are crossed. As Sylvester McMonkey McBean, Bradley Greenwald is irresistible. We wanted to give him our money, too. Kim Kivens, playing Standlee’s mom, Mrs. Upplee, sings about proper behaviors of Star-Belly Sneetches in a silvery soprano. And Max Wojtanowicz makes a suitably snooty Mayor Snietzsche, doing his best to maintain the status quo.

Dawkins’ script and lyrics are quick and witty. Scenic designer William Boles deserves five stars for coming up with McBean’s marvel of a machine, and Alex Jaeger’s costumes accent a mostly yellow palette with bits of argyle and plaid. In the pit, out of sight, Jason Hansen leads a band that sounds much bigger than it is.

Dr. Seuss’ book is about 850 words and takes five minutes to read aloud. The musical is two hours long, including a 15-minute intermission because kids need snacks and potty breaks. So a lot has been added. And while some grown-ups at Sunday’s matinee got a little squirmy, the kids didn’t seem to mind at all. FMI and tickets ($15-71). Ends March 26.

Chris Thile will host a second season of ‘Prairie Home’

There’s still some grumbling – and probably will be for some time, like low thunder receding into the distance over miles of Minnesota fields and two-lane highways – about the new “A Prairie Home Companion.” Hosted by that McArthur “genius” grant-winning whippersnapper, mandolinist Chris Thile, it’s not the same as the old one.

Garrison Keillor is gone. Instead of “The News From Lake Wobegon,” there’s a stand-up comic, and a new song written by Thile for each new show. The guest musicians are different, and there are more of them: people like Jack White, Esperanza Spalding, Angelique Kidjo, the Shins, Regina Spektor, Marcus Mumford of Mumford & Sons.

In general, there’s more music, less talking. The vibe is younger, hipper, but still cozy. If you’ve listened to a live broadcast or gone to a show at the Fitz, maybe you thought, “Hey, this Thile kid is pretty good. And the show is still above average.” 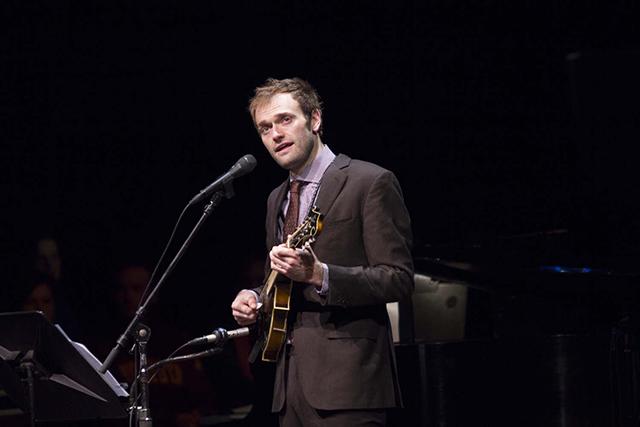 Let’s not forget that Keillor hand-picked Thile. That Thile grew up listening to APHC, and that hosting the show is a dream job for him. He’s in it for more than a minute, even though he doesn’t live in the Twin Cities (he recently moved from Portland, Oregon, to New York City) and has other commitments – his bands Nickel Creek and Punch Brothers, a new record with jazz pianist Brad Mehldau, another new one due out April 7 with Yo-Yo Ma and Edgar Meyer and a U.S. tour for that starting April 21. (The tour is not stopping here and we wonder WHY NOT?)

The old APHC was heard on nearly 700 public radio stations by some 3.5 million listeners. The new numbers are 580 public radio stations and 2.5 million listeners, still nothing to sneeze at. So it’s no surprise that Thile will return for a second season as host, and for twice as many shows as the first season. The first season was 13 shows, with two more added last week, for May 13 and 20 at the Fitz; tickets go on sale for those March 14 (with a MPR member presale starting March 7). The second season will be 26 shows starting in October, on sale TBA. Rich Dworsky, Tim Russell, Serena Brook and Fred Newman will return; Sue Scott will not.

Now at The Museum of Russian Art: “The Siege of Leningrad.” In 1941, after the Nazis invaded the Soviet Union, a German army surrounded the city of Leningrad. The siege lasted 900 days, during which more than 1 million civilians died. It was one of the longest and most gruesome sieges in history. TMORA’s new exhibition, organized in collaboration with the State Museum of the History of St. Petersburg, Russia, is a multimedia presentation on this tragic event, featuring photographs, films, maps, and stories, highlighting both the awfulness and the life-affirming efforts of the people who lived through it. Closes June 4. 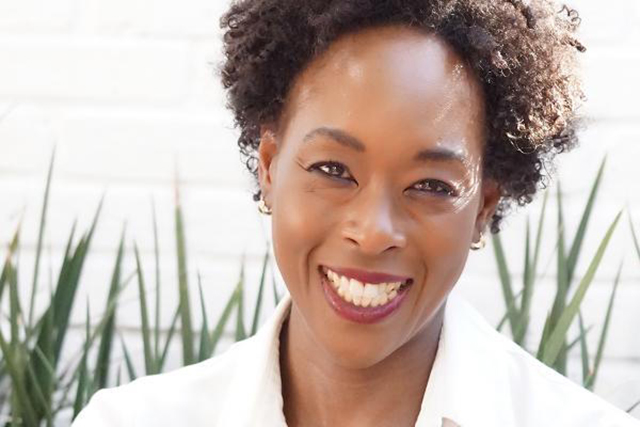 From the Department of Mea Maxima Culpa: Tonight (Tuesday, Feb. 21) at Northrop: The Distinguished Carlson Lecture featuring Margot Lee Shetterly. Yes, that Margot Lee Shetterly, the author of the New York Times best seller “Hidden Figures: The Untold Story of the African American Women Who Helped Win the Space Race,” which was made into a hit film, which is currently the highest-grossing best picture Oscar nominee. And why are we telling you at the last minute, when all (free) tickets have long been gone? Because the announcement got lost in our email. For which we are heartily sorry. There will be a cancellation line, and any tickets not claimed by 5:45 will be released at that time, so there’s still a chance. Shetterly’s lecture will be followed by a conversation with Michele Norris. 6 p.m. FMI.

Tonight at the University Club of St. Paul: Carol Connolly’s Reading by Writers: Charles Bukowski. An evening dedicated to the unapologetic, rough-hewn and colorful Skid Row poet laureate who died in 1994, hosted by Connolly and presented by Mark Berriman, Tom Cassidy, Erica Christ, Ted King, Klecko and Willie Murphy. 7:30 p.m. Free, but a hat will be passed for the Saint Paul Almanac. FMI including King’s comment on Bukowski, which begins, “Henry Charles Bukowski was a drunken loafer and prolific writer.”

Tonight and Wednesday at the Dakota: Aaron Diehl presents Jelly & George with Adam Birnbaum and Cécile McLorin Salvant. It’s interesting that this is being billed as it is, because vocalist Salvant – winner of the 2010 Thelonious Monk International Jazz Vocals Competition and the 2016 Grammy for Best Jazz Vocal Album, an audience favorite and critics’ darling who has been hailed as “the voice of jazz’s new generation” – has gotten way more press and attention than Diehl or Birnbaum. And it’s interesting that she’s out with two acclaimed young pianists. Together, they’ll explore the musical riches of Jelly Roll Morton and George Gershwin. Not to be missed.  7 and 9 p.m. FMI and tickets ($35-45).

Wednesday at the Roseville Library: Nnedi Okorafor. Club Book – a program of the Metropolitan Library Service Agency (MELSA), founded in 2010 and funded by legacy money – kicks off its Winter/Spring 2017 season with a science fiction and fantasy author whose work is inspired by her West African heritage. Okorafor’s many books include “Akata Witch” (aka the Nigerian “Harry Potter”) and “The Book of Phoenix.” 7 p.m. Free. 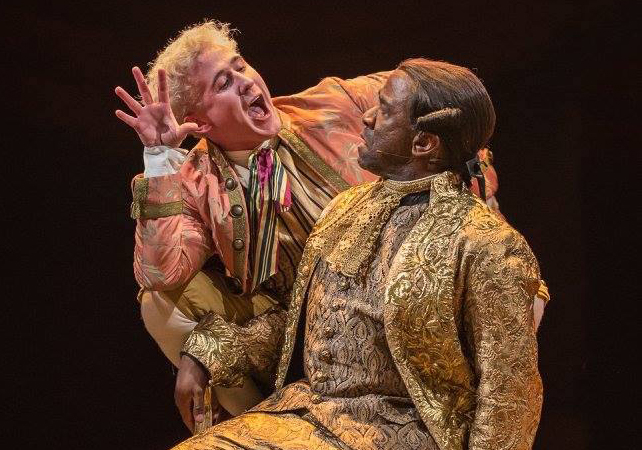