Now in its 136th year, the Schubert Club is Minnesota’s oldest arts organization. Its International Artist recital series was first presented in 1892. Over the years, it has brought literally hundreds of great recitalists to St. Paul including many big names: Artur Rubinstein, Yo-Yo Ma, Vladimir Horowitz, Beverly Sills, Jascha Heifetz and Renée Fleming are only a few.

Announced over the weekend, the 2017-18 Schubert Club International Artist Series should please regulars and attract new ears to the Ordway Music Theater and the Ordway Concert Hall. It begins with a bang: the great Hungarian pianist Sir András Schiff, in his first Schubert Club recital in more than 20 years. His Oct. 29 program will include music by Mendelssohn, Beethoven, Brahms and Bach. Next, on Dec. 6 and 7: bass-baritone Eric Owens, who wowed Metropolitan Opera crowds as Alberich in Wagner’s “Ring,” and soprano Susanna Phillips, who did the same as Musetta in “La Bohème.” Schubert Club Executive Director Barry Kempton promises “wonderful voices, great personality and charisma.”

We’re especially glad to see that Israeli mandolinist Avi Avital will return to the Schubert Club. He played an energetic, beautiful and far-ranging set for the Schubert Club Mix series in 2015; this time, he’ll appear with the Brazilian guitarist brothers Sérgio and Odair Assad, playing classical and Latin music in the Ordway Concert Hall on Feb. 20 and 21, 2018. On March 20 and 21, American violinist Jennifer Koh and Israeli pianist Shai Wosner will take the stage with Beethoven sonatas and a new work by L.A. composer Andrew Norman.

Kempton was surprised to discover that cellist Steven Isserlis had never before played the International Artist season. He’ll make his debut April 24 and 25, with Richard Egarr on harpsichord – not just any harpsichord, but an oldie from the Schubert Club’s keyboard collection.

The Schubert Club also announced its 2017-18 Music in the Park Series, held Sunday afternoons in the charming and intimate Saint Anthony Park United Church of Christ. The line-up: the piano-and-strings Schubert Ensemble of London (Oct. 8); the Dover String Quartet with David Shifrin on clarinet (Nov. 12); Germany’s vocal group Calmus Ensemble, with one soprano and four male voices (Dec. 3); the Grammy-winning Parker Quartet (Feb. 11, 2018); cellist David Finckel and pianist Wu Han (March 4); and the Lark Quartet: Past and Present (Apr. 15), combining the original foursome founded here in 1985 by Laura Sewell and the current quartet.

The Fringe has a new ED

Like a lot of people, we’ve been wondering if the Minnesota Fringe would have a new executive director in place by the time this year’s Fringe begins on Aug. 3. They’ve been ED-less since October, when Jeff Larson resigned after three years in the position (and a total of 17 years with the Fringe; that’s institutional knowledge). Larson was quickly followed out the door by Associate Director Ann Erickson. Jackie Nelson, a former deputy director at Interact, served as interim director while the Fringe board went looking for a successor to Larson.

Announced Monday night at the Fringe Festival Lottery, Dawn Bentley will be the new Fringe ED, effective April 3. Most recently Bentley was ED for Art Shanty Projects. She has taught nonprofit arts management and financial management at McNally Smith and other Minnesota schools; her résumé includes more than a decade of executive planning, business development, and strategic marketing.

Heading the Fringe is a giant job. Last year’s attendance was nearly 48,000 for 864 performances of 168 shows. This will be the Fringe’s 24th anniversary. Long may it consume a big chunk of summer. 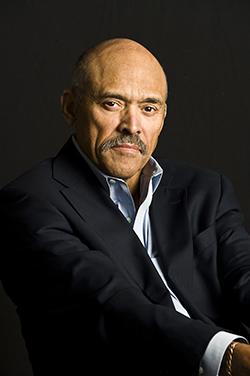 Lou Bellamy, founder of Penumbra Theatre and its former artistic director – his daughter, Sarah Bellamy, took over that role this year – has won the 2017 Kay Sexton Award.

The award is presented annually to an individual or organization in recognition of long-standing dedication and outstanding work in fostering books, reading, and literary activity.

Bellamy fits that description to a T. He’s been a champion of African-American literature for more than four decades – bringing to light works by African-American playwrights in the theater; teaching and mentoring students in the Department of Theatre Arts and Dance at the University of Minnesota; cultivating the production of new dramatic literature, poetry, and spoken word; inspiring the founding of the Lou Bellamy Rare Book Collection, now part of the Givens Collection of African American Literature.

The Givens also holds the Penumbra Theatre Archives, which curator Cecily Marcus describes as “an enduring record of hundreds of voices, perspectives, and experiences that are critical to our collective understanding of wht American life and literature is – what it sounds like, and who gets to tell it.”

Bellamy will be honored at the 29th annual Minnesota Book Awards Ceremony on Saturday, April 8. FMI and tickets ($55/$40). Meanwhile, catch the “Penumbra Theatre at 40” exhibit at the Minnesota History Center.

Tonight (Wednesday, March 1) at Jazz Central: Phil Hey and Pat Moriarty. Two improvising monsters, together in the cozy basement jazz room in Northeast. Drummer Hey studied with Ed Blackwell and toured for 20 years with Dewey Redman; he teaches at the U and St. Olaf. Saxophonist Moriarty is often heard (but not often enough) with his wife, pianist Ellen Lease; he leads the award-winning jazz bands at Roseville Area High School. Both are as free as can be, sharing brain waves, sensibilities and respect since they first played together in the 1970s. 8:30 p.m. FMI. $10 at the door, $5 with student ID. 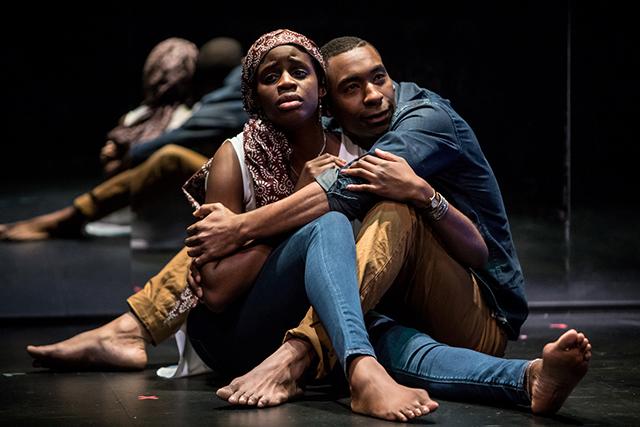 Photo by Dan Norman
“We Are Proud to Present a Presentation About the Herero of Namibia, Formerly Known as Southwest Africa, From the German Südwestafrika, Between the Years 1884-1915.”

Now in the Guthrie’s Dowling Studio: Jackie Sibblies Drury’s “We Are Proud to Present a Presentation About the Herero of Namibia, Formerly Known as Southwest Africa, From the German Südwestafrika, Between the Years 1884-1915.” A mouthful of a title and a stunner of a play (from reviews we’ve read; we haven’t seen it yet). Attempting to stage a presentation about a genocide in 1900s colonial Africa (which some have called “practice for the Holocaust,” yet hardly anyone has heard of), six actors – three black, three white – venture into racial dynamics in America in the present. Each performance includes a post-show community brainstorm or discussion. FMI and tickets ($9). Ends March 12.

Closes Sunday at the American Swedish Institute: “Where the Children Sleep.” If you can get through this exhibition without weeping, you’re made of very strong stuff. We all know, to some extent, about the numbing numbers of Syrian refugees and the massive international crisis. Award-winning Swedish photojournalist Magnus Wennman breaks it down into small, human stories: images of 20 refugee children simply trying to go to sleep. Which is hard when you’re homeless and terrified, when you don’t have a bed and you’re afraid of your own pillow. This is an opportunity to educate each other, including those who feel, for whatever reason, that America must close its doors. A friend could bring another friend. The exhibition goes from here to the Swedish Embassy in Washington, D.C. We had it first. 10 a.m. – 8 p.m. Thursday-Saturday, noon – 5 p.m. Sunday. FMI. Museum admission $10-$5.

Monday at The Museum of Russian Art: Ivan Turgenev’s “A Month in the Country.” Theatre Novi Most co-founder Vladimir Rovinsky will direct John Christopher Jones’ translation of Turgenev’s comedy, with TMORA’s new exhibit “Born in the USSR: Paintings of Childhood and Youth” in the background. The cast of 12 includes Carolyn Pool as Natalya and Remy Auberjonois as Rakitin. 7 p.m. FMI and tickets ($18 GA/$15 TMORA members/$10 student).

Woody Harrelson’s new film “Wilson” was made here, had a sold-out world premiere at Sundance and is coming home on Wednesday, March 22, for its regional premiere with the Twin Cities Film Fest (TCFF). Adapted from Daniel Clowes’s graphic novel “Ghost World,” directed by Craig Johnson, “Wilson” also stars Laura Dern, and most of the speaking roles were cast locally; familiar names and faces include Richard Ooms, Greta Oglesby, Bill McCallum, Mark Benninghofen and Sally Wingert. The free screening will be a red carpet event, with priority seating for members; all other tickets (if any) will be available in a rush line. 7 p.m. at the Showplace Icon. FMI.