Six playwrights have each won $18,000 awards and $2,000 in play development funds as 2017-18 Jerome Fellows and Many Voices Fellows, the Playwrights’ Center announced this week. In a statement, Jeremy B. Cohen, the center’s producing artistic director, called the winners “brilliant playwrights and storytellers … who will lead our country forward, and whose voices you will continue to hear echo across stages around the country.”

Jerome Fellows spend a yearlong residency in Minnesota. The 2017-18 fellows are Mia Chung, whose play “You For Me For You” has been produced by Mu Performing Arts/Guthrie Theater and others; Twin cities-based playwright Jessica Huang, whose “The Paper Dreams of Harry Chin” recently premiered with the History Theatre; New York-based playwright Tim J. Lord; and Boston native Tori Sampson.

The Many Voices Fellows, all early-career writers of color, receive dedicated support from playwright Christina Ham and introductions to theater leaders in the Twin Cities and Chicago. Both will spend a yearlong residency in Minnesota and one must be based here. The new fellows are Stacey Rose, a theater artist from Elizabeth, New Jersey, and Minnesota-based writer Saymoukda Duangphouxay Vongsay, whose “Kung Fu Zombies Vs. Cannibals” premiered with Mu Performing Arts in 2013.

Minnesota-based playwright Julia Gay, who was part of the Transatlantic Love Affair ensemble that devised “Promised Land,” seen at the Guthrie in January, was named a Many Voices Mentee. She will receive writing and play development services and a $2,000 stipend.

The Playwrights’ Center has close to 2,000 member playwrights around the world. It serves as artistic home for 25-30 core writers on three-year terms.

What’s your best idea for the arts in St. Paul? You have until midnight tonight (Friday, April 28) to apply for the 2017 St. Paul Knight Arts Challenge and a piece of the $1.5 million pie.

All you need to do is write 150 words about your idea. It must be about the arts, and for a project that takes place in or benefits St. Paul. If you win, you’ll need to find funds to match Knight’s commitment.

Don’t worry about that last part now. If you’re sitting on an idea, what have you got to lose? Go here for helpful tips from the Knight Foundation’s Adam Ganuza.

Today (Friday, April 28) and Saturday: 36th Annual Minneapolis St. Paul International Film Festival. MSPIFF wraps Saturday night, but there are still dozens of films left to see, many with guests in attendance. And a few tickets are still available to the closing night film, “King of the Belgians,” followed by a party on the A-Mill Artist Lofts rooftop. FMI and tickets.

Tonight at the Ted Mann Concert Hall: Oratorio Society of Minnesota Performs Randall Thompson’s Requiem: A Dramatic Dialogue in Five Parts. A 90-voice auditioned ensemble led by Matthew Mehaffey, the Oratorio Society specializes in large-scale works for chorus and orchestra. Tonight’s program is a world premiere of Thompson’s largest choral composition, a work so challenging it has rarely been sung in its entirety. This will be the first time anyone has performed it in an arrangement Thompson envisioned 60 years ago. His biographer, Carl B. Schmidt of Towson University, will give a presentation at the concert. 8 p.m. FMI and tickets ($35/$25/$15). 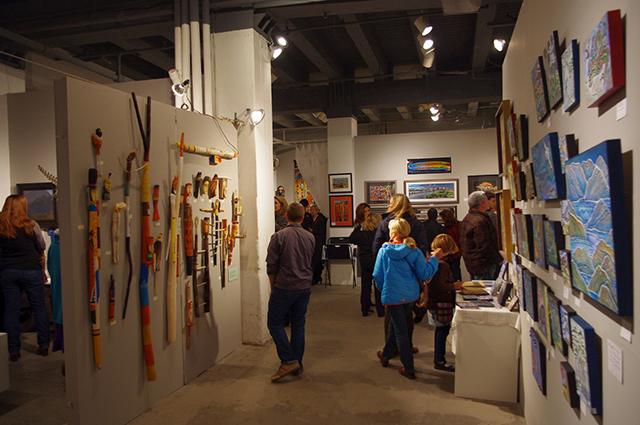 Tonight through Sunday in Lowertown: St. Paul Art Crawl. Beginning in 1977 with a group exhibition at the Union Depot, the Art Crawl has grown and grown, now numbering some 400 artists in more than 30 locations, plus live entertainment, dance classes, spoken word, guided tours, a community art project and a Caseta del Flamenco at CHS Field. Can you see and do it all in one day? Don’t even try. Go here and page through the catalog for an overview of the Crawl’s size and scope and an idea of the treasures in store. 6-10 p.m. Friday, 12-8 p.m. Saturday, 12-5 p.m. Sunday. Free. FMI.

Tonight through Sunday in Park Square Court: Greater Minnesota Artists Showcase. Work by 42 artists from cities and towns across Minnesota, presented by the Minnesota State Arts Board. 400 Sibley St., Ste. 200. In downtown St. Paul, same hours as the Art Crawl.

This weekend and next in the JSB Tekbox at the Cowles: 2017 Right Here Showcase. Founded by Off-Leash Area’s Paul Herwig, this annual mini-festival spotlights new work by Minnesota-based mid-career performing artists. Weekend One (April 28-30): In “Memory and Desire,” theater artist Ben Kreilkamp imagines his death to look back on his life, especially his relationships with women. Dance artist April Sellers presents “The Animal Corridor,” inspired by female icons including Janis Joplin and prize fighter Ronda Rousey. Weekend Two (May 5-7): Composer/director Chris Strouth deals with “Grief” in a “dark and minimal, sad but not depressing” piece built with live music, recorded sound and performance. Taja Will, dance artist, weaves her evening-length solo work “Bruja/Fugitive Majesty” from her personal mythology. 7:30 and 9:30 p.m. each evening; performers alternate. FMI and reservations. Free. 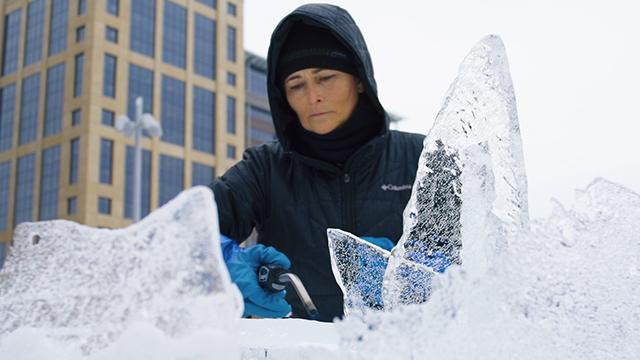 Sunday on your teevee: “MN Original: Ifrah Monsour, Jennifer Shea Hedberg, Eric Mayson, Jane Wunrow, Shapiro & Smith Dance.” Art takes many forms and expressions in the new episode of Twin Cities PBS’ award-winning arts and culture series. Monsour is a Somali-American multimedia performing artist. Her play, “How to Have Fun in a Civil War,” which was produced at the Children’s Theater, is based on her childhood memories of the 1991 war in Somalia. Sculptor Hedberg uses “ice logic” to create spectacular lanterns from globes, sheets, and shards of ice. Musician Mayson and his band perform his song “Aces.” Mixed media artist Wunrow explains how she abandoned art when she became a mother, then returned to it in new ways, using materials, concepts, and methods that fit this season of her life. The episode ends with Megan McLellan and Andrew J. Lester dancing “The Gist” on location in the Woman’s Club of Minneapolis. “MN Original” airs Sunday night on TPT 2 at 6 p.m. and again at 10. Watch it online anytime.