Peter Brook’s “Battlefield” has touched down briefly on the Guthrie’s proscenium stage; six more performances remain before it closes April 23. A touring show with its own cast and crew, including four actors playing multiple roles and musician Toshi Tsuchitori on African drum, the 70-minute play is a small excerpt from “The Mahabharata,” a massive Sanskrit epic poem thousands of years old.

The famed English theater director, now 92, has had a long relationship with “The Mahabharata.” Thirty years ago, he staged a nine-hour version that was later reduced to six hours for TV and three for movie theaters. Squeezed any tighter, it might become an actual diamond. “Battlefield” begins with a description of ghastly carnage following an apocalyptic war. Millions of corpses litter the field. The winning king, remorseful and despairing, wants to head for the forest and leave it all behind. The play ends with silence. In between are stories, fables, Tsuchitori’s drumming and surprising touches of humor.

Sunday’s performance came with a bonus: a 35-minute, post-play discussion with Brook and the Guthrie’s artistic director, Joseph Haj. Brook did the lion’s share of the talking, which Haj didn’t seem to mind in the least. Following is a small selection of condensed and edited excerpts.

Peter Brook on his early days in the theater: Boredom can creep into every single form [of theater]. The Shakespeare Festival at Stratford [was] this comfortable, cozy, ordinary and deadly middle-class theater [where] the audience came for only one reason: to sit back and feel cozy and comfortable, and look upon comedies and dramas about people like themselves, so they could nudge one another and say, “Isn’t that just like Aunt Edna?” Into that world came – when I had just started working – an amazing outsider, a great influence which showed there was a way out of deadly theater. In swept this extraordinarily tall, commanding, humorous, relaxed Irishman, Tony Guthrie. It’s so thrilling for me this week and tonight to be with you in the Guthrie Theater. I’m happy that we’re part of celebrating the heritage of Tyrone Guthrie.

On the timeliness of “Battlefield”: You have to be part of your time. It’s no use putting on something that people have to look at with respect but isn’t part of their lives. You can’t just make any old play – an opera, or a play from Shakespeare – modern by putting it into modern dress and using cellphones. You have to be all the time aware of what’s going on. Six months ago, “Battlefield” didn’t have the same meaning for all of us here in this country. The whole world is vibrating for better and for worse, and nobody knows where we’re being taken. Nobody knows, but we can feel something rising up.

The question that’s closest to us is, “What is the responsibility of those that set themselves up as our leaders?” If you have found yourself to be a leader of a small group, a big group, a nation, a continent, a question you can’t get away from now is, “A world has been destroyed. What can we do not to lose hope, but together find a way of going forward?” That theme seemed to us so fundamental that we started with the usual work of bringing together a little group of actors. The silence at the end is because everybody felt this is something we can’t escape from. 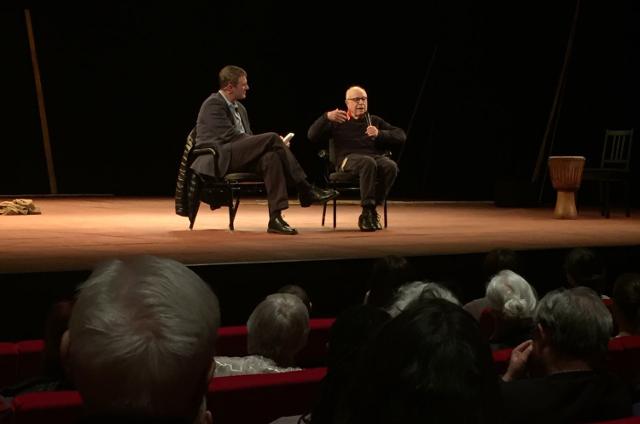 On simplicity: I’m terrified when I see that my work is now [considered] a labor of simplicity. This could mislead all sorts of young people to think, “Oh, we must start by saying no, we must be simple.” On the contrary. Simplicity comes by itself, when all that’s not necessary because it’s been worked on and tried, gradually falls away. … What you saw here tonight is infinitely cleaner and fuller and I think more alive than what we did a year ago. As long as this group is together, that will go on day after day.

On diversity: The more varied the group of actors, the more actors who come together to go against the barriers of race, of prejudice, of frontiers, the more one can have actors with different languages, backgrounds, traditions coming together and touched by the same aim, the same feeling, the more the audience can be varied. I’m afraid you can’t do the same thing, but we have from the first tried to get the lowest seat prices possible, so that the audience has as big a mixture as possible, because a good audience is a mixed audience. It is.

“Battlefield” continues through Sunday, April 23. FMI and tickets ($12.50-35). When Brook said to Haj, “I’m afraid you can’t do the same thing,” he was acknowledging the costs of running the Guthrie. Ticket prices for “Battlefield” start at $12.50, plus there’s the Dowling with its $9-for-everything ticket prices.

The Guthrie’s 2017-18 season announcement in March wasn’t quite complete. Because of licensing terms, two productions couldn’t be announced until April 17. As promised, here they are.

February 17-March 24 on the thrust stage: “Indecent,” a new play with music by Pulitzer Prize winner Paula Vogel (“How I Learned to Drive”). An exploration of artistic censorship, “Indecent” opens on Broadway today. This will be the first Vogel play at the Guthrie. A director will be announced at a later date.

June 16-Aug. 26, 2018, on the thrust: “West Side Story.” For the 100th anniversary of Leonard Bernstein’s birth, Joseph Haj will direct the Guthrie’s first-ever production of the iconic musical, which “has long been on my wish list of plays to direct,” he said in a statement. “It excites me to put ‘West Side Story’ in conversation with ‘Romeo and Juliet’ on which it’s based, and to explore those profoundly moving narratives about young people trying to find love in dangerous environments and against impossible odds.” Haj will also direct “Romeo and Juliet,” which opens the season in September.

The Ordway just wrapped its own production of “West Side Story,” which earned high praise. We’re probably in for a big Bernstein year.

Herbie Hancock to headline summer’s Music in the Zoo series

On April 30, UNESCO Goodwill Ambassador Herbie Hancock will lead an All-Star Global Concert in Havana for the sixth annual International Jazz Day. On Aug. 11, he’ll play the Minnesota Zoo. That’s one of the beauties of the Music in the Zoo concert series, which just announced the lineup for its 25th anniversary season. You never know who will show up, and sometimes you read a name and fall off your chair. 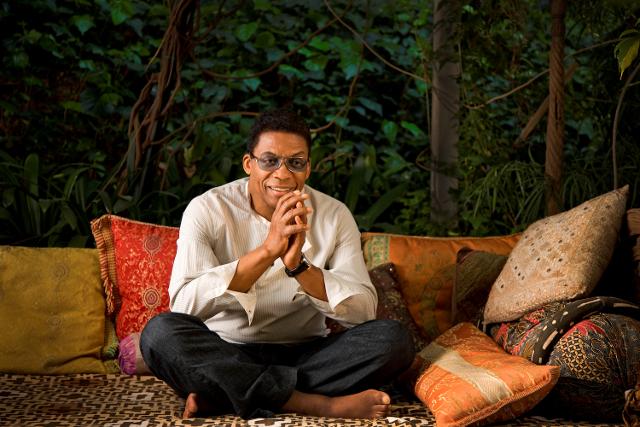 An NEA Jazz Master, Kennedy Center honoree and living legend, pianist and composer Hancock has been a force in jazz for five decades. His most recent Grammy – he’s won 17 so far – was the 2016 Lifetime Achievement Award. At 77 (he had a birthday last Wednesday), he never slows down or rests on his considerable laurels, and he’s always up to something new. Sue McLean & Associates snagged him during this year’s summer tour. He’ll be here with his current band: Vinnie Colaiuta, James Genus, Lionel Loueke and Terrace Martin.

Wednesday at the American Swedish Institute: Klas Bergman book release: “Scandinavians in the State House.” Given how heavily Minnesota was settled by Scandinavians, it’s not a huge surprise that several ended up in government, from Floyd B. Olson to Hubert Humphrey to Walter Mondale. Swedish born journalist/author Bergman has written a book about that, just out from Minnesota Historical Society Press. He’ll talk with former Minnesota state legislator Tom Berg. 6:30 p.m. FMI and registration ($5). 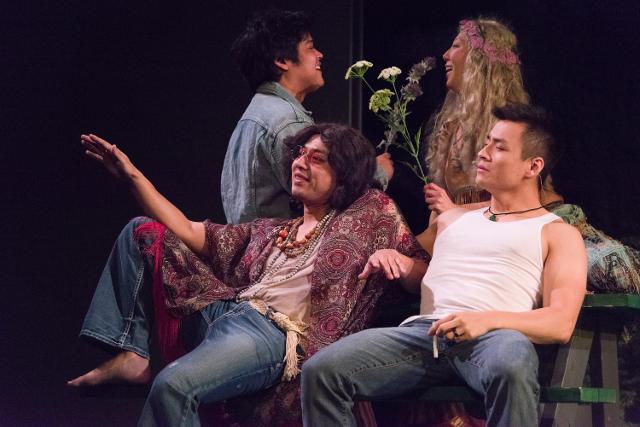 Now at Mixed Blood Theatre: “Vietgone.” The regional premiere of Qui Nguyen’s play, which everyone seems to be talking about, is here now, where you can see it for free (through Mixed Blood’s Radical Hospitality) or a $25 reservation. Using hip-hop, martial arts and comic book aesthetics, Nguyen tells his parents’ love story, starting with their meeting in an Arkansas relocation camp after the fall of Saigon. In an interview with American Theatre, Nguyen said, “‘Vietgone’ is basically the anti-‘Miss Saigon.’ I don’t mean that it’s contradictory to the musical or even a reaction to it, but it’s about the Asian-American characters being the ones with agency over the narrative. They’re not a prop for the typical straight-white-male lead to learn from or to save. It’s not their story. It’s our story. We get to be the heroes.” Mark Valdez directs a cast that includes Sun Mee Chomet, David Huynh, Meghan Kreidler, Flordelino Lagundino and Sherwin Resurreccion. Wednesdays-Fridays at 7:30 p.m., Saturdays at 8 p.m., Sundays at 2 p.m. FMI and tickets. Ends April 30.

Thursday at the Dakota: Lizz Wright. The final concert Prince attended before his death last April was Lizz Wright’s April 18 performance at the Dakota. That’s one reason to see her Thursday, but it’s not the main reason. That would be her way with a song – her incredibly plush and resonant voice, her passion, charisma and storytelling skills with a lyric. She’s soulful and delish, and she means what she sings. That being said, during a week when Prince is being remembered, you can expect that to figure into her performance. 7 p.m. FMI and tickets ($50-60).

Thursday at the Heights: The Found Footage Festival. Joe Pickett (The Onion) and Nick Prueher (David Letterman) present this year’s collection of VHS gems found at thrift stores – plus selections from Letterman’s video collection, inherited by the Festival when he retired. Includes a collection of satanic panic videos from the ’80s, on-air bloopers from North Dakota local news, and a Desert Storm parade sponsored by Taco Bell. 8 p.m. FMI and tickets ($12).