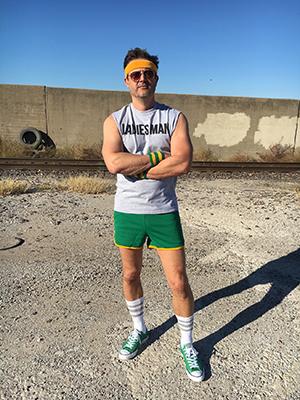 Syndicated cartoonist Stephan Pastis is a rat. And a pig, a goat, a crocodile and a zebra. Creator of the popular daily comic strip “Pearls Before Swine,” he learned from Charles Schulz of “Peanuts” fame that the only way to write a fully dimensional character is to base it on some aspect of yourself, because you don’t know anybody else well enough.

So Rat, the main character in “Pearls,” is Pastis’ unfiltered id. “He’s that voice we all have when somebody cuts you off on the freeway or takes advantage of you, or you’re on hold with your bank,” Pastis said in conversation a week ago. Pig is “the sweet, dumb, innocent, childlike part.” Goat is “the part that reads all the time and is always trying to learn new stuff.” Larry the Crocodile comes from a silly voice he used as a child, and put-upon Zebra is just trying to live his life, but everyone wants to eat him.

Pastis is also a rare bird. He figures the odds of becoming a syndicated cartoonist are one in 36,000. Each syndicate chooses maybe one new strip each year from thousands of submissions. Five out of six new strips fail. “It involves a lot of rejection for many years, which I went through.”

Today he’s one of the superstars. “Pearls” appears in more than 750 newspapers. There are “Pearls” T-shirts, hats, plush characters, calendars and dozens of books. The nine-city book tour for his latest collection, “Pearls Hogs the Road,” will bring him to Magers & Quinn tomorrow night (Wednesday, April 26).

When we spoke by phone last Tuesday, Pastis was lying in his yard in California.

MinnPost: Becoming a syndicated cartoonist with a daily strip is almost impossible. You’ve also called it a zero-sum game. What does that mean?

Stephan Pastis: Something has to go out before something goes in. No matter what goes out, no matter how old it is, I guarantee you it has fans. So you don’t go in with a clean slate. You go in as the guy who knocked that other strip out, even though you had nothing to do with the decision. It’s already hard enough to get readers interested in a new strip, and that just makes it tougher.

MP: Even though cartooning is so competitive, some very big names – Charles Schulz, Scott Adams (“Dilbert”) and Darby Conley (“Get Fuzzy”) – were nice to you and helped you in your early days. Why?

SP: It’s sort of like how at the end of an NBA game, where they’ve been fighting like crazy, the players hug each other. On the one hand, they are your competition, but on the other hand, there are so few people in your club who understand what you go through to produce a daily strip that it forms a bond. The very people you should be competing against and are competing against you are the most supportive, at least in most cases. It’s kind of weird.

SP: I had a friend who was working with Bill on a book. They gave me his email address, so I wrote to him, and I opened with this comic strip I had just published, where I’m in a bar trying to pick up women. I tell one I do a comic strip, and she asks which one, and I tell her “Calvin and Hobbes” and end up in bed with her.

That’s a good strip to send to your best buddy you’ve known your whole life, probably not the smartest strip to send to a guy you’ve never spoken to who happens to be Bill Watterson. But I did it, and he had a great sense of humor. He said something like, “Oh, yeah, that used to happen to me all the time.” And then he blew me away by saying, “Would you mind if I came back and drew your strip for a few days?”

That would be like a first-year film student getting a call from Martin Scorsese, who says, “I have a film coming up. Would you mind directing it?” It was mind-blowing. And I couldn’t tell anybody. That was the one condition. I couldn’t tell anybody we were going to do this until after all three strips had run.

MP: You were a lawyer for 10 years. Did that prepare you at all for your career as a cartoonist?

SP: Yeah. I so disliked it that it has been a dog nipping at my heels for years. I just want to run from it. I’m always reminded that I have to stay at least moderately funny so I don’t have to go back.

MP: Besides the tip on writing characters, what are some other things you learned from Charles Schulz?

SP: Everything. It’s such a fundamental question. It’s sort of like oxygen, so you don’t notice it. You just live by it. I guess it’s best explained if you look at what came before. If you look at anything pre-1950s, the tone is generally slapstick and the reactions are overstated, and the punch line ends with a guy with his mouth dropped open and an exclamation point over his head.

So Sparky [Schulz’s nickname] comes along and he changes all that. The tone can be dry. The pacing can be slow. The topics can be anything you want – philosophy, theology, depression, lost love. He does for the comic strip what another Minnesotan did for music. Bob Dylan comes along and suddenly the song doesn’t have to be about love anymore. It can be about anything. Sparky did that for comic strips.

MP: And he came from St. Paul.

MP: In “Pearls Before Swine,” you goad the censors and mock older strips like “Family Circus.” Your characters drink, smoke, swear, and knee each other in the groin. For a time, people thought you and your real-life wife, Staci, were getting a divorce, because you wrote strips where she threw you out of the house. Why do you do it, and how do you get away with it?

SP: You know what you have to be if you’re a cartoonist? You have to be the 11-year-old you once were who passed notes in class when the teacher’s back was turned to make your buddy laugh. Not a lot of thought goes into it, just the desire that you want to laugh, and you want to make the other guy laugh. To me, it’s funny to make fun of “Family Circus.” [Note: Bil Keane didn’t mind; he and Pastis became friends.]

The Staci story was interesting because I didn’t think anybody would care about my marriage other than me. But they did. Staci got calls from a lot of people who wanted to know what had happened. I did an interview for the Washington Post where I explained it wasn’t true. It still makes me laugh. I love stuff like that. 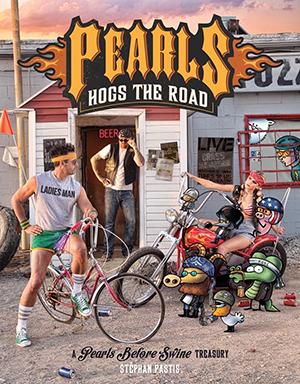 MP: Do you ever get nailed?

SP: It’s a high-wire act. You get a thrill from it. It becomes an adrenaline rush. I’ve done this for 16 years, and you learn where the third rails are. Some would surprise you. You mention a disease, even in passing, and it will mean that you are making fun of that disease or people with that disease. Mental, physical – they’ll kill you. Sex is borderline. Drugs are borderline. Mention a political party or a religion – especially a religion – and they’ll go crazy. You wander into things and find yourself in a lot of trouble. By and large, I can avoid the big ones. And then you just hit weird ones. Cyclists have a very poor sense of humor.

Another part of the high-wire act you can’t plan is sometimes the timing is just bad. Like you’ll do a strip that has a joke about airplanes, and you did it six months ago, and that day an airplane crashes, so you look like you’re making fun of it. That can happen.

MP: How far ahead do you write?

SP: I used to write a year ahead. I’m now six months ahead, which is still long for a cartoonist, but well ahead of deadline. If I want to comment on something, I have to substitute it in. I have to tell the syndicate and get them to put it in. People think I can do a strip today and it’s in the paper tomorrow, but that’s not how it works. The closest I can get is four weeks away, which is quite far off.

MP: So how does it work with Garry Trudeau, whose strips are very current?

SP: Garry has a special dispensation from the Pope. Because of his status, he has been on a two-week lead time for years, which apparently creates lots of problems in terms of how newspapers lay out the page. But I guess it works and they’ve made that exception. So, physically, can it be done? Yes. Would they do it for me? No.

MP: Are you ever tempted, especially these days, to do more political commentary or go after real people?

But here’s the struggle that takes place if you’re me: On the one hand, if you don’t go after something you feel strongly about, you feel like a sellout for not doing it. You feel like you’re someone who’s scared and not taking advantage of the space that you have on the page. On the other hand, if you’re a strip like me that’s generally not political – I don’t do “Doonesbury” – it’s sort of like somebody invites me into their living room to play Bach on a violin and I smash the violin and start playing Sex Pistols. I didn’t get invited in for that reason. So it sort of feels like a betrayal to some extent to go dramatically political if I’ve never shown that.

I know there are cartoonists who would disagree with me, and they might be right. I don’t know the answer to this, but there is an element when you’re in the newspaper of being a guest in someone’s house, and they can tolerate some behavior, but if you really pull a switcheroo on them they can get upset. So I don’t know. Maybe I’m wrong. Maybe I should go after it more.

I think when you’re a cartoonist or any creative person, it’s important to hide behind the curtain to some extent. Otherwise they’ll peg you too easily.

Stephan Pastis will present “Pearls Hogs the Road: A Pearls Before Swine Treasury” at Magers & Quinn on Wednesday, April 26, at 7 p.m. FMI. Free.

Stephan Pastis of ‘Pearls Before Swine’ on learning from Charles Schulz and Bob Dylan, and hiding behind the curtain