After last night’s screenings of “The Lost City of Z” and the opening night party at Jefe, the 36th Minneapolis St. Paul International Film Festival is officially under way. Here are three arts-related films we like at MSPIFF and why.

“A Quiet Passion.” At the St. Anthony Main Theatre on Sunday, April 16 and Wednesday, April 26. FMI and tickets.

There’s already a lot of buzz about this film, and you can see it first at MSPIFF. Cynthia Nixon was perfect as cynical, ambitious attorney Miranda Hobbes in HBO’s “Sex and the City.” She’s magnificent as reclusive, independent-minded 19th-century American poet Emily Dickinson in Terence Davies’ “Quiet Passion.” Catch it if you have any interest in Dickinson, language, period dramas, and drop-dead gorgeous films that take their time.

After Emily’s close-knit family brings her home from boarding school, she never leaves. With permission from her stern but loving father (Keith Carradine, with mutton chops), she writes poems between the hours of 3 a.m. and 6 a.m. Dickinson’s poetry is woven through the film, most often in voiceovers by Nixon. As the years pass, Emily’s life becomes increasingly circumscribed.

Except for a few scenes, the film is set entirely indoors. The rooms of the Dickinson home in Amherst, Massachusetts, are filled with carved wood furniture, heavy drapes and flickering candles. Over these, and the ornately patterned walls, the camera passes slowly, horizontally, lingering on every detail. If you’re thinking it sounds slow as molasses and dull as dishwater, it’s not. Here’s a snippet of Davies’ often witty dialogue:

“Did you say something to him to shock him?”

“Only that I just finished reading ‘Wuthering Heights.’ And he was scandalized.”

“No. So I told him that to condemn a novel he had not read would be like going to Sodom or Gomorrah and being disappointed that neither were Philadelphia.”

On April 26, the same day as the second screening of “A Quiet Passion,” the University of St. Thomas will host a marathon reading of Emily Dickinson’s poetry – all 1,789 of her poems. It starts at 8 a.m. in the O’Shaughnessy Room of O’Shaughnessy-Frey Library Center and ends around 9 or 10 p.m. FMI. Free.

“Bill Frisell, A Portrait.” At the St. Anthony Main Theatre on Monday, April 24 and Friday, April 28. FMI and  tickets.

What we learn from Emma Franz’s laid-back, thoroughly enjoyable film is that Grammy-winning guitarist Bill Frisell has a lot of guitars and feels kind of bad about not playing them more often. That he’s a slow, deliberate talker. That everyone who knows him loves and respects him. That he’s probably the nicest guy in the world.

We learn a bit about Frisell’s past – how he saw guitarist Wes Montgomery at age 16 and decided he should find someone to teach him to play the guitar; how he recorded his first albums with the picky German label ECM; how he has played and recorded with everyone. Several musicians chime in: Bonnie Raitt, Paul Simon, Joe Lovano and Jack DeJohnette, to name a few.

We see Frisell in performance at the Village Vanguard with Paul Motian and Lovano; with John Zorn’s Naked City band; with his own trio of Tony Scherr on bass and Kenny Wollesen on drums; with his string quartet. We visit him at his home in Seattle, in a room full of CDs, papers, and those guitars.

“The sound has to be in your imagination first,” he says about his music, “and then you figure out a way to get it to come out.” When he composes – Raitt tells of a time when Frisell wrote 60 new pieces in two or three weeks – he just “puts some notes on paper.” Best known as a jazz guitarist, he insists “it’s all just music.” His recent recordings have included country songs and Americana.

Frisell will attend the April 24 screening. On Tuesday, April 25, he’ll play a concert with Scherr and Wollesen at the Hopkins Center for the Arts. Bring your film ticket stub or receipt and get into the concert at a discounted rate. Call 952-919-1111 for details. 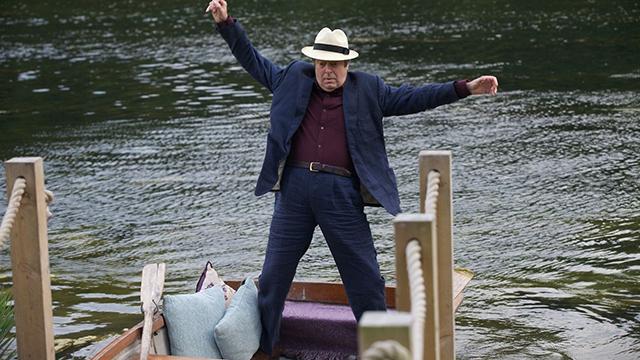 Courtesy of Lightyear Entertainment
“The Hippopotamus”

“The Hippopotamus.” At the Uptown tonight (Friday, April 14) and the St. Anthony Main on Saturday, April 22. FMI and tickets.

Based on the novel by Stephen Fry, “The Hippopotamus” is a hilariously vulgar comedy with a surprisingly warm heart. Ted Wallace (Roger Allam) was once a famous and successful poet. Unable to write a line of poetry for three decades, he’s working as a theater critic and hitting the whiskey bottle hard. When he’s fired for insulting his younger boss, he meets a young woman in a bar who offers to pay him handsomely to solve a mystery on one of England’s great estates.

At first, Wallace thinks he can drink his way through that job as well, but it’s complicated. The owners are the parents of his godson, David. There’s history, and David is the source of the mystery. Is he really different and special, as everyone seems to believe?

When your source material is Stephen Fry, you have to be careful what you quote. “The notion hung in the air like a piss-filled Hindenberg” is about as mild as it gets. Wallace calls someone “a bitter bin-bag of custard,” whatever that means; it sounds vaguely Shakespearean. He carelessly throws a lit cigarette at a duck. There are sexual situations. This is not one for the kidlets. But if you’re in the mood for bawdy jokes and hearty laughs, this delivers both. Director John Jencks will attend tonight’s screening.

If you’re a Fitzgerald scholar, you already know the 14th International F. Scott Fitzgerald Society Conference is coming to St. Paul this summer – for only the second time in its history, which makes no sense, frankly, since St. Paul has more meaningful Fitzgerald sites than anywhere in the world. If you’re a hard-core Fitzgerald fan, maybe you’ve heard about the conference but you’re on the fence about committing to a week of Fitzgeraldiana. Early registration ends Saturday, and after that, the price goes up $25. FMI. Register here.

Several public events are planned for the conference, including a pool party at the University Club and a Gatsby Night with the St. Paul Saints. We’ll tell you all about those in June.

Sunday on your teevee: “MN Original: Shanan Custer, Shawn Carling, Lea Thompson, Lindsay Locatelli.” The award-winning arts and culture series from Twin Cities PBS takes us into the lives and work of three artists in our midst and a hometown girl who moved away and made it big. Writer, actor, director and Brave New Workshop veteran Custer has spent her life going for a specific kind of laugh: the laugh of recognition. Her collaborations with Carolyn Poole include the comedy hit “2 Sugars, Room for Cream.” Carling creates lamps out of old gears, gauges, radiators, and other treasures he finds at antique shows. “You have to dig through a lot of junk to find good junk,” he says. His lamps are sold all over the world, and he loves his work so much that “every day is a Saturday.” Thompson was born in Rochester, grew up in Minneapolis and found fame in Hollywood (“Back to the Future”). Visiting Minnesota to accept an award from the Twin Cities Film Fest, she spoke with “MN Original” about her life and her dreams. Locatelli makes what she calls “art jewelry”: big, bold, wearable sculptures inspired by nature and memory. “MN Original” airs Sunday night on TPT 2 at 6 p.m. and again at 10. Watch it online anytime.

Monday and next Friday (April 21): Katie Donovan. Dublin poet Donovan has won the 21st Annual Lawrence O’Shaughnessy Award for Poetry of the University of St. Thomas Center for Irish Studies. On Monday at the Merriam Park Library, she’ll talk poetry with Minnesota poet Jim Lenfestey. On Friday, she’ll read from her work in the auditorium of the John R. Roach Center for the Liberal Arts on St. Thomas’ St. Paul campus. Her five collections to date include “Off Duty” (2016), which focuses on the year her husband died. Named for a former St. Thomas English professor, the $5,000 cash award honors Irish poets. The library talk is at 7 p.m., the reading at 7:30. Both are free and open to the public.

Tuesday at Open Book: Somalis in the Twin Cities: A Discussion of Immigration and Politics in Uncertain Times. What are we doing right at creating an immigrant-friendly community? What could we do better? Jaylani Hussein, ED of CAIR-Minnesota, will moderate a dialogue with authors Stefanie Chambers (“Somalis in the Twin Cities and Columbus: Immigration Incorporation in New Destinations”) and Ahmed Ismail Yusuf (“Somalis in Minnesota”). Former Minneapolis Mayor R.T. Rybak will make the introductions. Presented by Rain Taxi with the Minneapolis Foundation and Trinity College. 7 p.m. Free, but do RSVP.

Tuesday and Wednesday at Crooners: Red Planet with Bill Carrothers CD Release. Take an already excellent, well-established trio – Dean Magraw on guitar, Chris Bates on bass, Jay Epstein on drums – add the splendid pianist Bill Carrothers, and you’re in for an evening of high-end music-making. All four know their way around Coltrane and Monk, so the new CD, out Saturday on Minneapolis-based Shifting Paradigm Records, includes two tunes by each, interspersed with originals by Magraw and Bates. Halfway through the album, Bates’ “Music is a Weapon of Hope and Healing” is just what we need. In the Dunsmore Room, meant and made for listening. 7 p.m. both nights. FMI and tickets ($15, $40 prix fixe dinner show).