If the words “polymath” and “protean” didn’t exist, someone would have to coin them to describe Stephen Hough. Britain’s greatest living pianist, with an adoring international following, he won his first national piano competition at 8, after which a newspaper headline asked, “Could this be the new Mozart?” Well, maybe, except Mozart wasn’t also an abstract painter, published poet, novelist and blogger.

Hough was the first classical musician to win a MacArthur “genius” grant. He is an accomplished composer who often includes his own music in performances. His dozens of CDs have won numerous prestigious awards and prizes; in 2008, Gramophone named his complete Saint-Saëns piano concertos the best recording of the past 30 years. For six years, he wrote a provocative and popular culture blog for the Telegraph, where his topics included music, hats, perfume, and being an openly gay, practicing Catholic. In 2013, he was named a Commander of the British Empire. MusicalAmerica once described him as an “all-round smart and kind human,” which probably says it best.

In 2008, Hough wrote two Masses, one for Westminster Abbey and the other for Westminster Cathedral. He had finished the first and most of the second when he was involved in a horrific car crash from which he walked away. This weekend at the Basilica of St. Mary, VocalEssence will perform both Hough’s “Mass of Innocence and Experience,” which includes poems by William Blake, and “Missa Mirabilis,” the Miracle Mass. Hough will also play several piano works by Debussy, including “Claire de Lune.” He lives in London and New York and was at home in New York when we spoke with him by phone last week.

MinnPost: Will this be the first time both of your Masses have been on the same program?

Stephen Hough: It will. It’ll be interesting. They’re both pieces that are now about 10 years old, so in a way they’re my children who’ve gone off to university. They’re not around the home, as more recent pieces that I’ve written. I’m also coming as an audience member to hear them.

MP: How would you compare and contrast the two?

SH: The “Missa Mirabilis” is a big work which was conceived for a large organ and a lot of singers. It’s a much more extroverted piece. It’s longer. It has a Creed as well. The “Mass of Innocence and Experience” is more intimate. It was conceived originally for children’s voices on the upper parts, because it was written for Westminster Abbey, which has an all-male choir with boys singing the top choir. The whole idea of the innocence and experience of the William Blake poems is very important to the way the music works and to the whole concept of the piece.

MP: You wrote both Masses in the same year. Was that a coincidence of commissions, or had you always wanted to write a pair of Masses?

SH: I began writing the “Innocence and Experience” Mass first. I had this idea of using the Blake text in the same way that Benjamin Britten uses the Wilfred Owen text in the “War Requiem.” This, in a much more modest kind of way, was doing that. I wrote quite a bit of it, and then I spoke to the music director at Westminster Cathedral, who’d originally commissioned this, and he said, “That’s lovely, but we wouldn’t be able to perform it liturgically because we can’t do secular texts as part of the Mass.”

I thought, “What a disappointment! What am I going to do?” I started thinking about another Mass I would write for them. And I know [organist and choir master] James O’Donnell, who used to be at Westminster Cathedral and then moved down the road to Westminster Abbey, which is an Anglican Episcopal church. We were talking, and he was interested in doing something. So I said I was writing this mass, “Innocence and Experience,” with Blake text. And of course Blake has a plaque in Westminster Abbey, and it happened that 2008 was the 250th anniversary of his birth. So we put together this concert celebrating William Blake with other settings of his music and some poetry read by Simon Callow, and we had a wonderful evening. In the end, they both found a home, but it wasn’t as I’d planned it in the beginning.

MP: In 2008, while you were writing the second Mass, you were in a car crash that could have killed you. You’re a man of faith. Do you feel you were saved for a reason?

SH: I find it very difficult to think of miracles in that way. I don’t believe God singles people out for blessings, not like that. I can’t accept that this family gets miraculously saved from a house fire and that family doesn’t. I can’t logically see any kind of God working in that way. All I would say is that life itself, which none of us ask for – we’re all born without our choice – is an incredible gift, and whether it lasts a short or a long time, all of it is extra in a sense to what we deserve or might have, and I think I just feel a certain gratitude for that.

I’m 55. I might’ve died 10 years ago when I had that car crash. I had 10 more years. I don’t think I’m being shown any special favor, but I’m very happy to have had a wonderful 10 years and met wonderful friends, and it’s not been a time without difficulty. My mother died last year, which was a very sad, unexpected thing, so life is black and white in so many ways, but in the end, everything is a gift.

MP: Have you lived your life any differently since the crash?

MP: And taken up painting. 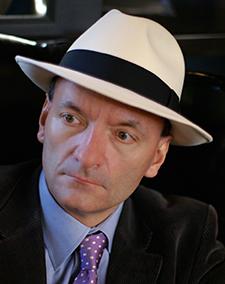 SH: I hadn’t really done any painting before then, so it did trigger some things. But there wasn’t any sense of “Wow, I’ve survived this, therefore I better get on with it and do some more stuff.” When you’ve been through anything like that, part of the way of recovering is a certain forgetting about it. I don’t want the vision of that car crash to be going through my mind. I remember it, but I feel like it’s a scar that’s healed over. It’s a road that I traveled on very often to go north, the major highway between London and the north of England. For a while, passing the point where the accident happened, I did get a chill, but that’s sort of passed now. I just feel very grateful to be here talking to you today.

MP: You’ve said that when you play piano you want to bring joy to people, touch hearts and bring comfort, and those things make your life worth living. Can you talk a bit about that?

SH: Why do people compose music? Why do people listen to music? When we go into a concert, we go into a place where we want to experience a sort of ecstasy, to come out of ourselves. And I think the way that happens with music is one of the great treasures of being human, that a whole bunch of us can gather together in a room, and we’re all having on one level the same experience, but also different experiences, because everyone will respond in a different way to music, and yet somehow that music is a common trigger.

That’s something very thrilling to me, particularly with traveling around a lot. I was just playing yesterday afternoon in Athens, Georgia. I’d never been there before. I don’t think I knew anyone in the audience, but here I am with all of these strangers. We all come from completely different backgrounds, and yet somehow during the time that I’m playing and they’re listening, we’re sharing something on a very intimate level, and I find that always touching and moving.

It’s amazing to me that that can be my life. Talk about having a privileged life! To be able to do this is such a joy for me, and to bring that joy to other people.

MP: When you won the MacArthur, you used the money to buy a studio where you play and compose. Can you tell us about your studio?

SH: It’s a few streets away from where I live in London. My place in London is very small, so a piano would take up a third of the room. I leave home in the morning when I’m there and go to my studio. I close the door and it’s soundproof. There’s no phone or TV or computer, and I can work uninterruptedly. That has been a huge advantage over the years.

I don’t have anything hanging on the walls. I also paint there, so my painting stuff is one side of the room. I don’t know the square footage. It’s not huge. It’s the basement level of a Victorian house, and it opens out the back onto a garden, which is very small and rather neglected, I’m afraid. But there are some nice shrubs and it’s nice to go out and have some fresh air, especially in the spring and summer months.

There are two pianos. There is an exercise machine, which is gathering dust, as so many exercise machines do. But that’s about it. There’s a sofa and a chair. I try to make it a little bit more hospitable, because sometimes I do interviews there with journalists. It’s a useful place to meet up for that. There’s no fridge. There’s a kettle and some old teabags. It’s very much just for working.

The VocalEssence concert, “Miracle Mass,” takes place Saturday, April 22, at the Basilica, with Philip Brunelle conducting and Aaron David Miller at the organ. Before and among his two Masses, Stephen Hough will play several piano works by Debussy. A concert conversation with Hough and Randall Davidson starts at 7 p.m., the concert at 8 p.m. FMI and tickets ($20-40); 612-371-5656.