Now settled into its new home in the Ritz Theater in Northeast Minneapolis, Latté Da will open 2017-18 on Sept. 13 with the five-time Tony winner “Man of La Mancha.” Founding Artistic Director Peter Rothstein sees it as a musical that “celebrates the perseverance of one man who refuses to relinquish his ideals.” He’ll set it in an immigration holding center with a multilingual cast, featuring Jon-Michael Reese and Rodolfo Nieto in their Latté Da debuts.

We’ll get a Christmas break from worldly concerns with “A Christmas Carole Petersen,” Tod Petersen’s ode to his mother, Carole, and her love of all things Christmas. The holiday hit will return for its 11th season beginning Nov. 29.

Starting Feb. 7, 2018, Latté Da will continue its love affair with Stephen Sondheim (after “Sunday in the Park With George,” “Company,” “Into the Woods,” “Gypsy,” and the brilliant “Sweeney Todd”) with “Assassins,” the multiple Tony winner about our nation’s culture of celebrity. What’s one of the fastest routes to instant fame? Shoot a U.S. president. Here’s where Michaels stars as Oswald, with Dieter Bierbraurer as John Wilkes Booth and Sara Ochs as Sara Jane Moore. The Ritz will be converted into a sinister fairground. This could be the most talked-about production of the season.

April 4 brings the world premiere of “Five Points: An American Musical,” with a book by Harrison David Rivers, music by Ethan D. Pakchar and Douglas Lyons, and lyrics by Lyons. Set in New York City in 1853, it tells the stories of two men, one a young black performer at a dance hall and the other an Irish immigrant. In a statement, Rothstein said, “Harrison David Rivers’ book provides an insightful look at the complicated relationship between the African American community and the recent European immigrants who converged on New York’s Lower East Side.”

The season’s final show, which opens May 30, is Glen Berger’s “Underneath the Lintel.” The play about a librarian who embarks on a journey that spans the globe and the ages has been performed around the world and translated into many languages. Latté Da’s production will be the first to feature live music (following up on this year’s “Six Degrees of Separation”), and the role of the librarian, originally written for a man, will be played here by Sally Wingert.

Latté Da’s annual NEXT Festival of new works will take place in the summer, dates and venues TBD.

Season tickets are on sale now.

Now at the Groveland Gallery: Michael Banning: “Under Light and Leaves.” Banning’s oil paintings of sparsely furnished interiors – his own apartment – seem filled with stillness. They’re showing concurrently with “Chroma,” Charles Lyon’s bright bursts of flowers. Each exhibition is intense and personal in its own way. Gallery hours Tuesday-Saturday, noon-5 p.m. or by appointment. Through June 3. 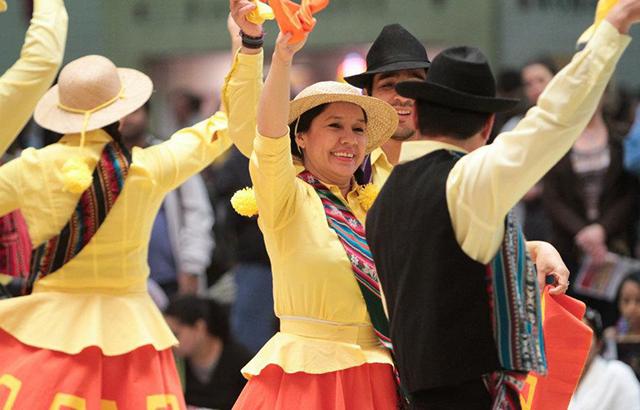 Friday afternoon through Sunday at St. Paul RiverCentre: Festival of Nations 2017. Think global, eat local, and enjoy the music, dance, and exhibits at Minnesota’s largest multicultural celebration. This year’s Festival, themed “Ceremonies and Rituals,” spotlights the traditions, history and journey of more than 90 ethnic groups and how each contributes to the American cultural landscape. With over 300 dancers and musicians performing on three stages, more than 40 cultural exhibits, dozens of interactive exhibits and demonstrations, 35 ethnic food cafes, and an international bazaar, it’s a timely reminder of how diverse we are. Public hours Friday 4:30-10 p.m., Saturday 10 a.m.-10 p.m., Sunday 10 a.m.-6 p.m. FMI and tickets ($11 advance, $13.50 door; $8 youth; 5 and under free).

Opens Saturday at the Ordway: “La Bohème.” Minnesota Opera wraps its 2016-17 season with Puccini’s tragic love story, one of the most popular operas in the world. With gorgeous music, endearing characters, some of the best arias ever written (“Che gelida manina” – What a cold little hand!), a romantic setting (1830s Paris) and a tearjerker ending (“Mimi!”), it never gets old. The opera company will present nine performances with two conductors and main-character casts. Michael Christie and Jonathan Brandini will share the podium. Sopranos Nicole Cabell and Miriam Khalil will alternate as Mimi, tenors Scott Quinn and Adam Luther as Rodolfo, sopranos Mary Evelyn Hangley and Alexandra Razskazoff as Musetta, and baritones Edward Parks and William Lee Bryan as Marcello. FMI and tickets ($25-200). Ends May 21.

Sunday: 43rd Annual MayDay Parade and Festival. In the Heart of the Beast Puppet and Mask Theatre’s MayDay blowout is an annual tradition for tens of thousands. A community-wide, community-building event centered on art and rooted in contemporary issues and concerns, it’s a parade, a ceremony, and a festival complete with giant hand-built puppets. This year’s theme: “Imagine, Heal, Resist.” The parade begins at noon at the corner of 25th St. E. and Bloomington Ave. S., travels south on Bloomington to 34th St. E, and turns west toward Powderhorn Park, where a festival continues throughout the day. The MayDay Tree of Life Ceremony begins at 3 p.m. FMI. Free. 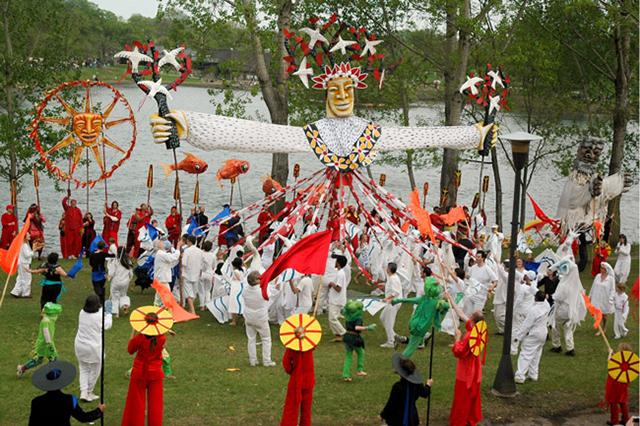 Monday at the Riverview: “The Birds.” Now that spring has sprung and birds are everywhere, it’s the perfect time to watch this scary masterpiece about birds gone wild. The Trylon is presenting its Ninth Annual Hitchcock Festival outside its own wee space and in the larger but still charmingly old-fashioned Riverview and Heights theaters. This screening will be at the Riverview. 7 p.m. FMI and tickets ($8).