The grand re-opening of the Minneapolis Sculpture Garden, scheduled for Saturday, June 3, has been postponed a week to Saturday, June 10. It was going to be a free, daylong public party for the multimillion-dollar renovation, with a ribbon cutting, live music, DJs, dance, art-making activities and more. Maybe it will still be all that; maybe it will be something very different.

Changing the date gives the Walker Art Center and the community a bit of breathing room between now and the re-opening, which everyone needs. In case you spent the Memorial Day weekend out of town and away from the news and the Internet, here’s why.

On Thursday, May 25, the Walker’s executive director, Olga Viso, published an article on the Walker’s blog called “Cultivating the Garden for Art: Curatorial and Civic Thinking Behind a Reanimated Green Space.” She discussed the history of the garden and its value to the city and the state, the partnership between the Walker and the Minneapolis Park and Recreation Board, the campus-wide changes at the Walker and how the Walker chose the art to be displayed in the Garden, including 18 new works.

Among the new works is “Scaffold” by Los Angeles-based artist Sam Durant, with whom the Walker has had a relationship; he was artist-in-residence there in 2002. A steel-and-wood platform that “layers together the designs of seven pieces of historical architecture – each one used in significant executions in U.S. history,” it forms “a unique survey of the history of capital punishment in U.S. history.” Until you know what it is, it looks like a piece of old-fashioned playground equipment. Stairs lead up to the platform. You’re meant to climb them, walk on the surface and look around.

When “Scaffold” was acquired by the Walker, it had a history of successful exhibitions at the prestigious dOCUMENTA (13) show in Kassel, Germany; The Hague in the Netherlands; and the Jupiter Artland sculpture park in Edinburgh, Scotland. In those places, it was received as thought-provoking, sobering and meaningful. But it wasn’t personal.

For many Minnesotans who learned late last week about the sculpture, it was stunningly, excruciatingly personal. “Scaffold” is another word for “gallows.” One of the designs Durant brought into his piece was the gallows where 38 Dakota men were executed in Mankato on Dec. 26, 1862, on orders of President Abraham Lincoln. The largest mass execution in American history continues to cause – and will always cause – great trauma for Native people and relatives of the men who were hanged.

The news that “Scaffold” would be a permanent part of the Sculpture Garden – it had already been installed near the iconic “Spoonbridge and Cherry,” but without most people knowing what it was – lit a fuse. The response was immediate, fierce and widespread. Native people weren’t the only ones who condemned the sculpture. They were joined on Facebook and Twitter (#TakeItDown) by non-Native artists, tribal groups, arts leaders, community leaders, politicians and other supporters. On Friday and Saturday, protesters gathered outside the chain-link fence surrounding the Garden, hung signs on the fence and wrote on the sidewalks with chalk.

On Friday, Viso wrote an open letter to “The Circle,” a publication devoted to Native American news and arts. In “Learning in Public: An Open Letter on Sam Durant’s ‘Scaffold,’” she followed a statement about freedom of expression with this: “We recognize, however, that the siting of ‘Scaffold’ in our state, on a site that is only a short distance from Mankato, raises unique concerns. We recognize the decision to exhibit this work might cause some to question the Walker’s sensitivity to Native audiences and audiences in Minnesota more familiar with this dark history. … Because the structure can serve as a gathering space, which allowed visitors to explore it in un-ceremonial ways, we realize it requires heightened attention and education in all of our visitor orientation and interpretation. … This is a deep learning moment.” 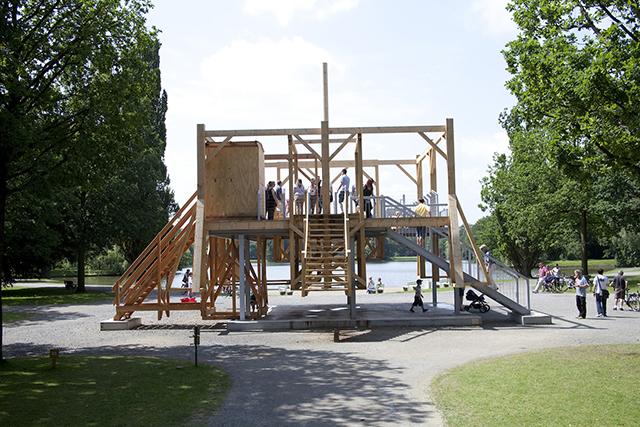 That evening, the Walker tweeted, “We have been listening to feedback regarding the ‘Scaffold’ artwork in the Minneapolis Sculpture Garden.”

By Saturday, the signs posted Friday by the protesters had been removed. The protests continued and more signs were added. City Pages published a piece by Anishinaabe artist and writer Ashley Fairbanks titled “Genocide and mini-golf in the Walker Sculpture Garden.” (The Walker’s Artist-Designed Mini Golf has been a popular Sculpture Garden attraction.) Dakota activist and artist Graci Horne, who is related to one of the Dakota 38, circulated an email describing the sculpture and plans for a “peaceful and prayerful demonstration.” Horne noted that “Dakota People and Various Supporting Native relatives have started to keep space at the nearest location to the sculpture which is on Bryant Avenue S and Kenwood Pkwy.” A new website, Not Art 38 + 2, was born.

The writing was on the fence, the sidewalk – and the wall. Things were escalating. The opening was approaching. It seemed likely that June 3 would be more demonstration than celebration, historic for reasons other than planned.

On Saturday afternoon, Viso released a statement on the Walker’s Facebook page saying, in part: “I regret the pain that this artwork has brought to the Dakota community and others. Prompted by the outpouring of community feedback, the artist Sam Durant is open to many outcomes including the removal of the sculpture. He has told me, ‘It’s just wood and metal – nothing compared to the lives and histories of the Dakota people.’ I am in agreement with the artist that the best way to move forward is to have ‘Scaffold’ dismantled in some manner and to listen and learn from the Elders.”

That day, artist Sam Durant released his own statement saying, in part: “I made ‘Scaffold’ as a learning space for people like me, white people who have not suffered the effects of a white supremacist society and who may not consciously know that it exists. … [Your] protests have shown me that I made a grave miscalculation in how my work can be received by those in a particular community. In focusing on my position as a white artist making work for that audience I failed to understand what the inclusion of the Dakota 38 in the sculpture could mean for Dakota people. I offer my deepest apologies for my thoughtlessness. I should have reached out to the Dakota community the moment I knew that the sculpture would be exhibited at the Walker Art Center in proximity to Mankato.”

On Sunday afternoon, Viso and Minneapolis Park and Recreation Board Superintendent Jayne Miller released a joint statement announcing the postponement of the re-opening. Between now and then:

•  Tonight (Tuesday, May 30), Dakota Elders will meet with members of the Dakota community to decide on next steps, including which 12 Elders will attend a face-to-face mediation Wednesday with the Walker, the Minneapolis Park and Recreation Board and artist Sam Durant.

•  The private mediation will take place on Wednesday morning.

•  A public statement will be released at 2 p.m. on Wednesday afternoon.

We don’t yet know how or whether the postponement will affect other events related to the re-opening, including the Walker Wide Open Party planned for Thursday, June 8.

To be clear, this wasn’t the first time that anyone outside of the Walker had heard of “Scaffold.” A press release sent in January 2016 included a description of Durant’s work. It did not, however, go into detail about which gallows were represented. We should all have started asking questions back then.