After singing their way through the Beatles’ “Sgt. Pepper” to close their 2016-17 season, the men’s vocal ensemble Cantus announced a 2017-18 slate that continues their winning mix of pertinent, poetic and popular concerts.

One of last year’s big hits was the Cantus-meets-Chanticleer event that sold out Orchestra Hall. The blend of splendid voices – and the sense that everyone was showing off just a little – was thrilling. This year will bring Cantus together with Sweet Honey in the Rock, the legendary African-American women’s vocal ensemble, again at Orchestra Hall. Each group will sing a set, then come together for a grand finale. That concert, a single, will take place on Sept. 21.

The regular season will open Oct. 12 with “Discovery of Sight.” A program that explores what it means to truly “see” will feature a new commission from New York-based songwriter Gabriel Kahane, Eric Whitacre’s “Lux Aurumque” and music by Franz Schubert and Richard Strauss. Following the “Christmas With Cantus” concerts, the group will return in April 2018 with a celebration of our planet titled “For the Beauty of the Earth.” The annual “Covers: A Pop Concert” will wrap the season in June with Cantus’ take on Fleetwood Mac’s classic album “Rumours,” sung in its entirety. Most Cantus concerts are presented in several locations in and around the Twin Cities.

Each year’s “Covers” concert includes an announcement of Cantus members who are moving on. At the “Pepper” show, we learned that all eight members will be back for 2017-18.

Co-founded in 2013 by conductor and pianist Andrew Altenbach, current and past Minnesota Orchestra musicians David Williamson, Basil Reeve and John Miller, and sopranos Linh Kauffman and Madeline Cieslak, all lovers of Bach, the Minnesota Bach Ensemble has earned a reputation for excellence. MacPhail’s intimate Antonello Hall, MBE’s home since 2016, is the perfect place to experience the ensemble’s musicianship and clarity. 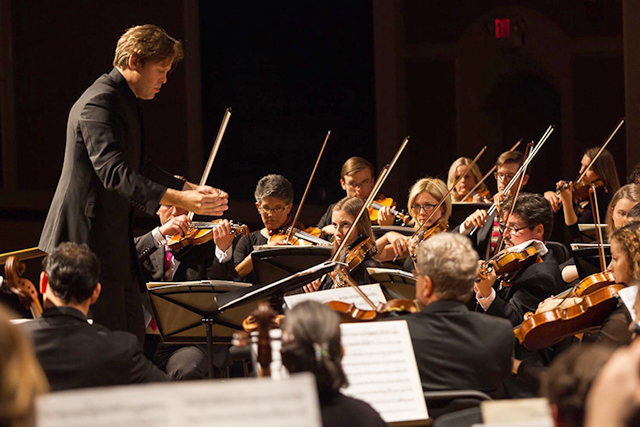 Photo by Amy Jeanchaiyaphum
The Minnesota Bach Ensemble under the direction of conductor Andrew Altenbach.

Altenbach, who also serves as artistic director, emailed a few comments about the season. “Telemann’s Water Music is less well known than Handel’s, but it’s just as brilliant and also designed for parties that lasted until dawn. I have a special excitement for the J.C. Bach Symphony and Vivaldi’s Concerto for Two Cellos. J.C. Bach was a master in his own right, and there is no question why Mozart, touring in London as a child prodigy, grew so enamored with him and his music. The Vivaldi feels like a brilliant, Italian version of ‘Anything you can do, I can do better.’ ”

Tickets to all three Minnesota Bach Ensemble concerts are on sale now ($30/$10 students).

Opens today (Friday, June 16) at the Edina Cinema: “The Women’s Balcony.” When a small Jerusalem synagogue suffers catastrophic damage, the close-knit congregation is left without a place of worship, a religious leader and a Torah scroll. A charismatic young rabbi steps in, eager to help – and to impose his own extremist views. “Why should women study Scripture?” he asks the men. “Women are already holier than Scripture.” He calls for the women to cover their hair. He implies that the balcony’s collapse is somehow their fault. When he bumps into one of the women on the street, he looks at her with scorn. Then – the final blow – the women see his idea of how their synagogue should be repaired. Taking matters into their own hands, with a nod to “Lysistrata,” they set out to save their community and their lively, loving way of life. First-time screenwriter Shlomit Nehama’s feminist parable, directed by Emil Ben-Shimon, gives us likeable characters faced with religious fundamentalism and social change. Evelin Hagoel is radiant as ringleader Ettie. A huge hit in Israel, “Balcony” is charming, warm and funny, with enchanting glimpses of old Jerusalem. In Hebrew with English subtitles. FMI including showtimes, tickets and trailer. 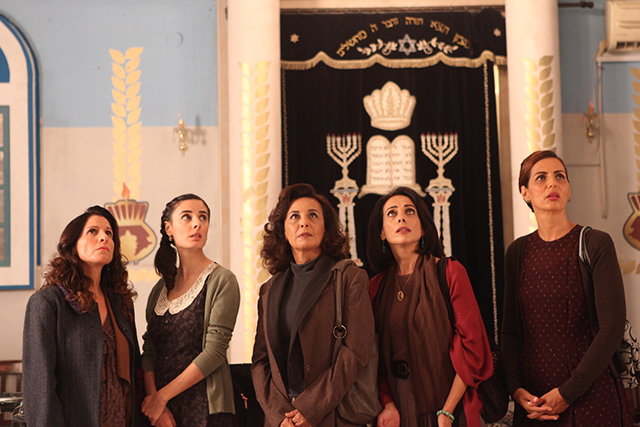 Courtesy of Menemsha Films
A scene from the motion picture “The Women’s Balcony.”

Friday and Saturday at the Walker: “Monterey Pop.” It was the first and arguably greatest of the destination music festivals, taking place over three days in summer 1967 on the Monterey County Fairgrounds. D.A. Pennebaker’s famous documentary – showing at the Walker in the 50th anniversary 4K restoration – set the standard for all concert films to follow. With The Mamas and the Papas, Simon and Garfunkel, Janis Joplin, Otis Redding, Canned Heat, the Who, Ravi Shankar, Jefferson Airplane, and Jimi Hendrix, who set his guitar on fire. (The 2017 version takes place this weekend. Wonder how it will stack up?) The film screens Friday and Saturday at 7:30 p.m., Saturday at 2 p.m. FMI and tickets ($10).

Friday through Sunday on the Minneapolis riverfront: 23rd Annual Stone Arch Bridge Festival. It stretches along Main Street SE beginning at Hennepin Ave. and extending to the Stone Arch Bridge; it also includes Father Hennepin Park and Water Power Park. You can easily spend the weekend in that beautiful part of the city, starting with the kick-off concert Friday at Water Power Park (6 p.m.), returning Saturday and Sunday for the art, free music on three stages, the Pop Art! Car Show, the food and the beer. More than 250 artists will show and sell their wares, dozens of bands will perform, the Minnesota Sinfonia will play on Father’s Day, and there will be activities for kids. Friday 5-10 p.m. (Water Power Park), Saturday 11 a.m.-10 p.m., Sunday 11 a.m.-5 p.m. FMI. Free.

Saturday and Sunday at the Ted Mann: Twin Cities Gay Men’s Chorus: “All You Need Is Love: The Beatles Volume 2.” Celebrating the 50th anniversary of the Summer of Love, reprising tunes from TCGMC’s Spring 2015 Beatles concert, one of the most popular in its 36-year history, “All You Need Is Love” goes deeper into the Lennon/McCartney songbook. You’ll hear songs they’ve sung before (“I Want to Hold Your Hand,” “Norwegian Wood,” “Come Together”) and new arrangements for men’s chorus of “Penny Lane,” “Do You Want to Know a Secret,” “A Day in the Life” and others. TCGMC will also announce its next season at these concerts. Friday and Saturday at 8 p.m., Pride matinee on Sunday at 2 p.m. FMI and tickets ($30-53). 612-624-2345.

Sunday on your teevee: “MN Original: Lynn Maderich, Gabriel Douglas, Paul J. Flick, Indigo & Snow, Nooky Jones.” The season finale of TPT’s award-winning arts and culture series feels like a cliffhanger. It crams a lot in, then seems to say, “But wait — there’s more!” Eight seasons in, the Legacy-funded series hasn’t run out of artists to feature and never will, because we live in a state so rich in the arts it’s almost embarrassing. Sunday’s new episode spotlights fine artist Lynn Maderich, who describes herself as “one of those little girls who loved horses and never got over it.” Blues rocker Gabriel Douglas of the 4onthefloor growls his way through a song called “Oathbreaker.” We meet assemblage and collage artist Paul J. Flick, whose Joseph Cornell-like boxes are miniature worlds. Annabella Sardelis of Indigo & Snow wordlessly demonstrates the art of environmentally sustainable snow-dyeing. Finally, neo-soul band Nooky Jones, led by Cameron Kinghorn, sings a steamy love song. Tucked in the middle of the episode are words we’ll end with, by Flick: “Art is a rhythm that comes with one’s heartbeat, also the rising and setting of the sun. It’s like a dance that people should be feeling all the time in order to be connected to life.” Amen. “MN Original” airs Sunday night on TPT 2 at 6 p.m. and again at 10. Watch online anytime.

Monday at the Dakota: Jane Bunnett and Maqueque. Award-winning Canadian saxophonist/flutist Bunnett brings her all-female sextet to the Cities for an exhilarating evening of Afro-Cuban rhythms, soul and jazz. Because she lives in Toronto, Bunnett has been able to work with Cuban musicians throughout her career. Her performances with Maqueque (mah-keh-keh) – which the jazz magazine Downbeat called a “band of young killer female musicians” – have been described as “booty-shaking world jazz” and “explosive.” 7 p.m. FMI and tickets ($30-35).