Can poetry save the planet? It’s worth a try. During the 1960s, poetry helped shape U.S. public opinion about the war in Vietnam. Poets Robert Bly and David Ray formed an organization called American Writers Against the Vietnam War. Along with other poets — including Lawrence Ferlinghetti, Galway Kinnell and Diane Wakoski — they held read-ins and teach-ins, readings, rallies and demonstrations across the country.

At first, they read protest poems by others, then wrote their own. Several of Bly’s antiwar poems appeared in his book “The Light Around the Body,” which won the National Book Award in 1968. Bly gave his prize money to the resistance.

Earlier this year, when Robert’s wife, Ruth Bly, learned that climate change denier Scott Pruitt had been confirmed to head the Environmental Protection Agency, she realized, “We’d better do something now.” She thought back on the ’60s and the power of poetry.

In conversation last week, she said, “We were all shocked when we realized that our survival depends on something as small as a bee. But we took a deep breath and got some improvements made in environmental policy, and then along came this group of billionaires, and they are furious. They say, ‘No way! Forget about bees and polar bears!’ Their rage is so huge they decide to eat the whole world. … They are trying to go backwards in environmental policy, and they are causing such chaos. Poetry is one of the few things that can be honest in the face of it.”

Together with poet and former Star Tribune journalist Jim Lenfestey and writer Freya Manfred, Bly organized an event called “Poets and Writers and Musicians Against the War on the Earth” for Summer Solstice night – tomorrow, Wednesday, June 21 – at St. Joan of Arc Church in Minneapolis. “This isn’t only going to be a grievous complaint session,” Lenfestey emphasized. “I want us to be joyful again,” Bly said.

There will be poetry, of course, and other readings, and musical interludes by Tim Frantzich and Larry Long. The plan is for people to exit to Long’s song “Butterflies Dancing.” As they leave the church, they’ll pass by tables with representatives from Rain Taxi, the Citizen’s Climate Lobby, Climate Generation, Cool Planet, the DFL Environmental Caucus, the Sierra Club – North Star Chapter, Minnesota Interfaith Power and Light, and mn350.org, where they can stop, visit, learn more and sign up to help, if they want.

Following the example set by American Writers Against the Vietnam War, the idea is simple. “Poets, writers and musicians get together and speak their hearts,” Lenfestey said. “The audience makes connections with activist organizations and takes that energy with them. You can do this anywhere.” Lenfestey and Bly hope the idea will catch on and spread.

The evening will also celebrate the latest reprinting of an anthology edited by Robert Bly in 1980 for the Sierra Club, “News of the Universe: Poems of Twofold Consciousness,” with poems in response to the natural world. We’re sure to hear poems by Bly, read by others. Now 90, he won’t be present. He will be at home, Ruth said, “enjoying the silence.” Meanwhile, Lenfestey would like us to know these lines from Robert’s poem “Listening,” which “explain what we are doing on Wednesday”:

The Hermit said: “Because the world is mad,

The only way through the world is to learn

The arts and double the madness. Are you listening?”

“Poets and Writers and Musicians Against the War on the Earth.” At St. Joan of Arc Church, 4537 3rd Ave. S., Minneapolis. Free and family-friendly. Doors (and strolling musicians) at 6 p.m., program at 7. Note: Parking will probably be a challenge, so give yourself some extra time.

Sad news for the Twin Cities music community and beyond: Sonny Knight has died. Diagnosed with lung cancer earlier this year, he succumbed Saturday morning at Abbott Northwestern Hospital. He was 69. 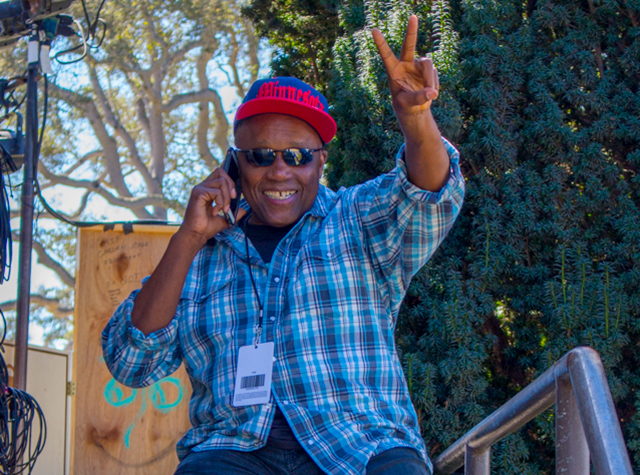 Photo by John Whiting
Sonny Knight at the Monterey Jazz Festival in 2015.

Knight recorded his first single in 1965, when he was 17. Then came the Army, Korea and Vietnam, time with the Minneapolis-based band Haze, kids, and decades as a truck driver. In 2012, he sang some dates around the release of the Minneapolis-based label Secret Stash’s compilation “Twin Cities Funk and Soul: Lost R&B Grooves from Minneapolis/St. Paul 1964-1979.” Soon he was fronting a band called the Lakers, giving sweaty, funky, fabulous shows here, across the U.S. and in Europe. Handed a second chance, he grabbed it and held on tight.

We caught up with him at the Monterey Jazz Festival in 2015, before a set that brought a crowd to its feet, fists in the air and dancing. We sat and talked in a small tent near an outdoor stage, before he put on his royal blue show suit, and his emerald green shirt.

Knight was sweet and shy, polite and humble, not at all the power belter he would soon be on stage. He wore a Minnesota hat. Talking about a European tour, he said he had really liked Helsinki, Finland, because it reminded him of Minnesota. He was genuinely surprised by his success, at one point saying, “I can’t believe it. … People are making all this fuss about what? About me?”

There are other people who would say something like that, and you’d know right away they were fishing. Not Sonny. He meant it.

Wednesday at the Dakota: Christian Sands. Back in 2011, we spoke with the great bassist Christian McBride. In part of the interview that didn’t make it into MinnPost, he told us about up-and-coming musicians he was listening to. “I am very hot on this young man named Christian Sands,” he said. “I want you to keep a serious eye out on him.” Before long, Sands was part of McBride’s trio, a big deal for such a young man (Sands was then 22). Today he has five Grammy nominations and he’s touring behind his first release on the esteemed Mack Avenue label. One set only, 7 p.m. FMI and tickets ($20).

Thursday on Raspberry Island: One Voice Mixed Chorus presents “The Pirates of Penzance.” A gender-bending take on the Gilbert and Sullivan classic, performed by our LGBTA community choir and perfect for Pride. The pirate king is a woman (One Voice singer Anita McColley) whose swarthy crew of sailors arrives by speedboat on the Mississippi. Come dressed in pirate costume for this family-friendly event. Food trucks will be available at each show, or pack a picnic. Bring a blanket or lawn chair. Preview at 7:30 p.m. Thursday; performances (all outdoors) at 3:30 p.m. Saturday, 2 p.m. and 5:30 p.m. Sunday. Free, but reservations are encouraged. VIP tickets ($25/50) are available.

Opens Friday at the Park Square: “Might As Well Be Dead: A Nero Wolfe Mystery.” Peter Moore directs the Park Square’s second world premiere commission of a Nero Wolfe mystery. Adapted by Joseph Goodrich from the novel by Rex Stout, this case finds the detective and his assistant, Archie Goodwin, in pursuit of a missing heir who may also be a murder suspect. With E.J. Subkoviak as Wolfe and Derek Dirlam as Goodwin. 7:30 p.m. FMI and tickets ($40-60). Ends July 30.