On Friday afternoon, a construction worker held aloft a board that had just been chain-sawed from the “Scaffold” structure in the Minneapolis Sculpture Garden. After speeches, a ceremony and prayers, the large installation artist Sam Durant intended as a learning space for white people and Walker Executive Director Olga Viso saw as an artistic statement about capital punishment was coming down.

What had not been factored into the process of choosing, purchasing and constructing this enormous two-story work – 34 feet high, 47 feet wide, 52 feet deep – in a public park was how traumatizing it would be for the Dakota community in the Twin Cities and beyond. Based in part on the gallows used to hang 38 Dakota men in Mankato in 1862, the largest mass execution in U.S. history, “Scaffold” wasn’t art to them. Protests led to meetings, which led to an extraordinary agreement reached Wednesday at the Walker that will likely be debated for decades: The sculpture would be dismantled and the wood removed to a site near Fort Snelling and burned. Meanwhile, the grand re-opening of the multimillion-dollar Sculpture Garden was pushed from June 3 to June 10.

Friday’s ceremony drew hundreds of people. When we returned late Sunday afternoon, things were much quieter. Removing the wood was estimated to take four days; it took only two. On Sunday, the wood filled a nearby dumpster. All that remained of “Scaffold” were the concrete slab it stood on and the steel understructure, the top of which looks like a fence surrounding a prison.

The Dakota have maintained a presence at the Sculpture Garden since before Memorial Day, when the controversy erupted. On Sunday, a small group kept watch over the site and the dumpster, ensuring that the wood stayed put. For some people, a board or a scrap would make a tempting souvenir. Sam Wounded Knee, a member of the Crow Creek Dakota who had been at the site for 10 days, answered questions patiently and directly, emphasizing that no Dakota person or tribe speaks for all Dakota.

Does he see the outcome as a victory? “A small victory,” he said. “We would have left it up and burned it where it is. They should burn it here because it happened here.” Calling Durant’s sculpture “the death machine,” he said the Walker had given “many excuses for not burning it here.” He reflected on the mediation, which he attended. “I thought going into the meeting that we would tell them what we wanted. They [the Walker] told us what we were allowed to do.”

Wounded Knee would like the space given to “Scaffold” to be used for a positive statement about Native people. He specifically referenced the “Dignity” statue in Chamberlain, South Dakota. Looking toward the site, he imagined it doing good. “We want a piece to educate our kids,” he said. “We want to tell our side of the story.”

Update: According to an interview published Monday in the New York Times, the wood from the sculpture may not be burned. Viso told the Times, “There is discussion now within the broader Dakota community about whether it should burn or not burn. We’re really clear it’s for them to decide, not for the Walker or the artist.” 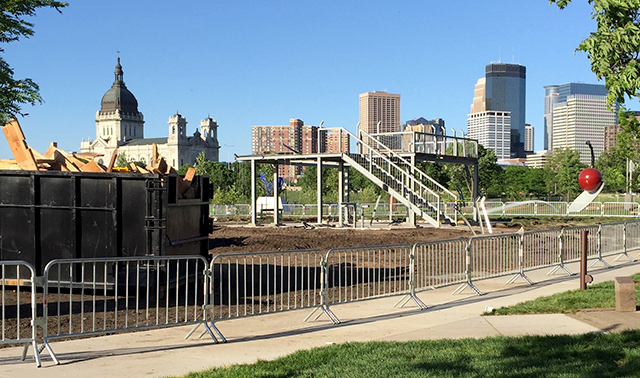 MinnPost photo by Pamela Espeland
Only the metal frame of “Scaffold” stands as the wooden planks are discarded in the dumpster.

If all you know of the Minnesota Museum of American Art – recently rebranded the M – is the Project Space in St. Paul’s Pioneer Endicott Building, you’re in for a surprise. The Project Space has hosted many fine shows since it opened in 2013, but those merely hint at the wealth of what the M has hidden away: some 4,500 works by American masters including Thomas Hart Benton, Joan Mitchell, Romare Bearden, Ed Ruscha, Louise Nevelson, Wendy Red Star, Paul Manship and George Morrison, along with works by contemporary Minnesota artists Wing Young Huie, Julie Buffalohead, Xavier Tavera, Pao Houa Her, Warren MacKenzie, Jim Denomie and many others.

In spring 2018, we’ll start seeing some of them when the new M opens its first real permanent home: a state-of-the-art gallery; the Sifo Center for Creativity, with 5,000 square feet of classroom and maker spaces, named for a historic St. Paul toy company; community gathering spaces; and a sculpture court with a sky bridge, all in the Pioneer Endicott.

The M was born in 1894 as the St. Paul School of Fine Arts, started collecting art for instructional purposes in 1927, began seriously collecting in the 1940s, and held its first exhibitions in the 1950s as the Saint Paul Art Center. Renamed the Minnesota Museum of Art in 1969, adding “American” in 1992, it was housed in the Jemne Building, the Landmark Center and West Publishing Company on Kellogg Blvd. In 2012, it moved to the Pioneer Endicott, a historic building originally designed by Cass Gilbert and Solon Beman. That is now a hot location, linking Rice Park and Lowertown, right on the light rail, joined by skyway to the rest of downtown St. Paul.

The $12.5 million development project will begin this summer, funded by donations, tax credits, Cultural STAR Program funds, tax increment financing from the city of St. Paul, and other sources – plus a $6 million bonding bill voted in by the Minnesota Legislature in the wee hours of Friday, May 26. The state funding will be used for the M’s second phase of expansion, which will include more galleries and an art study center.

Executive Director Kristin Makholm said in a statement, “This is our opportunity to imagine and build a museum from the ground up that has the values of a 21st-century museum at its core – accessibility for all, intergenerational learning and community exchange, support of living artists, and responsible stewardship of a great collection.”

Tonight (Tuesday, June 6) through Sunday, June 11: Days of Russian Culture at The Museum of Russian Art. June 6, the birthday of Russian poet Alexander Pushkin, was used in the Russian diaspora to celebrate Days of Russian Culture. TMORA will hold three events: a 7 p.m. screening Wednesday of Michael Beckelhimer’s award-winning documentary “Pushkin Is Our Everything” at the St. Anthony Main Theatre, followed by a Q&A with the director (FMI and tickets); the opening Saturday from 6:30-8:30 p.m. of the new TMORA exhibition “Gifts and Prayers: the Romanovs and Their Subjects” (free; RSVP here); and a 6 p.m. concert Sunday in the main gallery, “Russian Fireworks,” featuring classical Russian masterpieces performed by Alexander Braginsky, Tanya Remenikova, Mlada Khudoley, Natalia Moiseeva, Ivan Konev and Denis Evstuhin (FMI and tickets; $25-30). “The Romanovs” closes Oct. 28.

Thursday at the U’s Continuing Education and Conference Center: “Psych 101: A Performance.” Wish you knew more about psychology? Here’s a whole semester of Psych 101 – in 90 minutes. Covering everyone from Freud to Piaget, Jung, Skinner and Maslow’s Hierarchy of Needs (it meets Esteem and Self-Actualization, maybe Belongingness and Love, if you bring a friend), this short course really is a performance and there won’t be a test. Brave New Workshop alum Jim Robinson co-wrote the script (based on 23 years of teaching psychology at St. Kate’s and St. Thomas); Dennis Curley (Table Salt Productions, “Church Basement Ladies”) wrote the music; BNW alum and T2P2 member Joshua Will directs; and the cast includes Michelle Cassioppi, Dennis Curley, Rachel Flanery, Robinson and Will. 6:30-8:30 p.m. FMI and sign-up ($55). 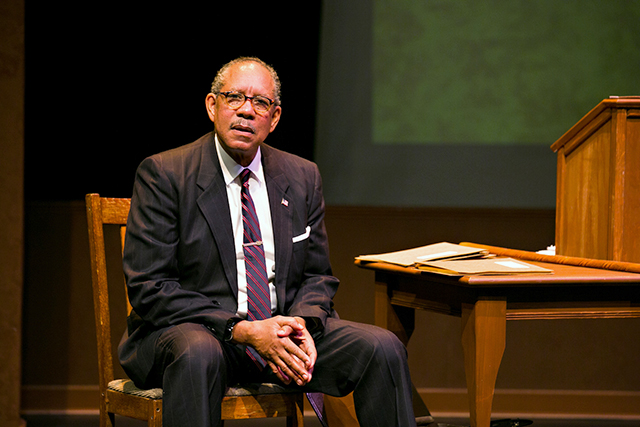 Lauren B. Photography
James Craven as Thurgood Marshall in “Thurgood” opening Thursday at the Lab at the Lowry Building in St. Paul.

Opens Thursday at the Lab at the Lowry Building in St. Paul: Illusion Theater presents “Thurgood.” We spoke with actor James Craven in 2015, before Illusion presented this one-man play in its own space in downtown Minneapolis. Craven has more gravitas in his pinky finger than most actors do in their whole entire selves. Based on the life of Justice Thurgood Marshall, the play by George Stevens Jr. can’t help but seem more poignant, pointed and powerful two short years later. Thursday’s 7:30 p.m. performance is the only preview ($15). 350 St. Peter St. FMI and tickets ($20-30). Ends June 18.

‘Scaffold’ comes down; the M to start building